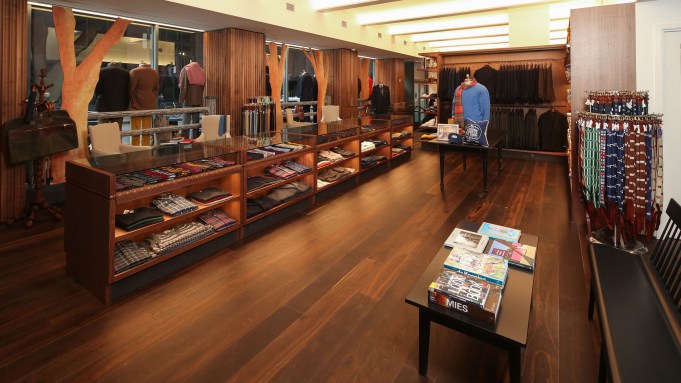 NEW YORK — Nearly four years after closing its store in Midtown Manhattan, J. Press is back.

The men’s specialty retailer that has its roots in classic Ivy League style has soft-opened a 2,800-square-foot store at 49-51 East 44th Street, between Madison and Vanderbilt Avenues, on the ground floor of the Yale Club. A grand-opening party is scheduled for Thursday night.

The location is not accidental: J. Press was founded in 1902 when Jacobi Press opened a store on the campus of Yale University in New Haven, Conn. The company has been owned by Japan’s Onward Kashiyama since 1986.

“We’ve always had such a close relationship with Yale,” said James Fitzgerald, vice president of retail for J. Press and a 31-year veteran of the company. J. Press still operates a store in New Haven, blocks from the Yale campus, as well as units in Washington, D.C., and Cambridge, Mass. In Japan, there are some 160 in-store shops.

Fitzgerald, who also manages the New Haven location, said a customer contacted him and said he’d found the perfect spot for J. Press to reenter New York City. The company was able to secure the spot, which is across the street from Grand Central Terminal. It brings the brand back into the men’s wear corridor in Midtown, where Brooks Brothers, Paul Stuart, Jos. A. Bank, Men’s Wearhouse and others all operate stores.

The store was designed by Japanese architect Toshiko Mori and was inspired by both its location as well as the history of the brand. For example, its vaulted ceilings are reminiscent of the Guastavino vaulting in Grand Central and provide a feeling of openness.

The shelving is made from natural walnut and the furnishings throughout the space are created from sustainably sourced wood from Maine in a Shaker aesthetic. Wide-plank oak flooring and antique bronze finishing is used throughout and speak to the brand’s New England roots.

The lighting is the first for a retail space and was created by the Kaneka OLED using thin sheet material to create soft natural light and eliminate glare.

The store carries both the J. Press Heritage collection and its younger-skewed Blue line. The week before the store opened on 44th Street, the company shuttered its only other New York City location on Bleecker Street in Greenwich Village.

Fitzgerald said the rent downtown was going to be raised to a point that made the store unsustainable. That store was focused primarily on the Blue collection. “It was a great store and we loved the vibe, but as a brand, we really need to be here,” he said.

The downtown store had originally been called J. Press York Street, a collection that was designed initially by Shimon and Ariel Ovadia of Ovadia & Sons. That collection was discontinued in 2014 after four years and reworked internally as J. Press Blue.

“In Japan, Blue is not just for young people, but here it’s our younger, trimmer, more-modern fit, is more casual and supplements our sportswear,” said Justin Spaeth, store manager. “It’s an easier transition for our customer. York Street went a little too far for us.”

In addition to the off-the-rack suits and sport coats, which retail on average from $795 to $1,350, there is a made-to-measure department in the rear. “That’s a definite area of growth,” said Fitzgerald.

Master tailor Jay Walter, 88, presides over the made-to-measure operation where suits open at around $1,600. After a long history at Brooks Brothers and other men’s companies, he joined J. Press eight years ago. In addition to suits, Walter creates shirts, trousers and overcoats.

Fitzgerald said the company will depend on word-of-mouth, traditional press and the party to get the message out that it has returned to Midtown.

“We have a great core customer,” he said. “It’s very generational — I’ve seen fathers and sons shop together.” In addition, he said J. Press has stayed true to its heritage of offering classic American style. “Other brands have changed and the customers feel alienated. But with J. Press, they know what to expect.”

Although retail has been challenging for many and the company did experience a dip as ath-leisure took hold, the business has recovered, Fitzgerald said.

“Suits and sport coats in the past year are starting to come back,” he said. “You just have to know what you do and do it well.”

After bringing Takashi Sudo on board as president of  J. Press at the end of 2014, Onward Kashiyama said it was planning to expand its footprint in the U.S. with five to 10 stores being added in key American cities including San Francisco and Chicago.

But as of right now, Fitzgerald said the company is concentrating its energies on the new Midtown store and will then turn its attention to New Haven where it has been in a temporary location for the past couple of years. That store is expected to be constructed and reopened on the Yale campus by 2020, he said.