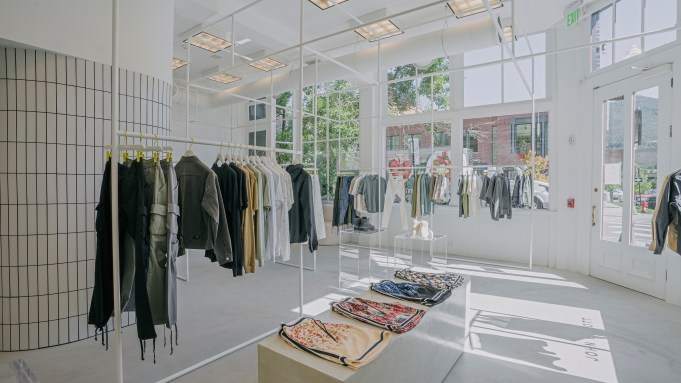 John Elliott has touched down in Aspen.

The designer has opened his fourth retail store in the tony Colorado resort community.

The 974-square-foot boutique at 535 East Cooper Avevenue seems like a bit of a departure for the Los Angeles-based brand, but Elliott said that it’s not so much of a stretch as it first appears.

The other stores are located on Melrose in L.A., the Design District of Miami and SoHo in New York City.

“When we look at where we want to take the brand and where our customer congregates, we thought this was a unique opportunity to get access to a real luxury consumer,” Elliott said of the Aspen store. And the company’s online data also showed that the community would be the right choice for a physical store.

Elliott added that his brand has always been inspired by the outdoors and embraces seasonality — hallmarks of Aspen, which started out as a winter ski destination but has since expanded into a year-round resort community.

“This store is important because of its location. It’s in a highly visible area of a town that has a true luxury network,” he said. “The by-product is that we’ll have the ability to tell stories with new and exclusive products that’s directly influenced by the climate and unique surroundings that can only be found in Aspen.”

Because the space is smaller than the other three locations, Elliott said the mix will be edited but will nonetheless be fully representative of the brand. It will include men’s and women’s collections, artisanal leather pieces, Japanese denim, Los Angeles-made sportswear, a complete Italian-made footwear program and Italian tailoring pieces.

“It will really be a true flagship,” he said.

The design of the space is reminiscent of the spaces architect Stephan Wiemer developed for the company in Los Angeles, Miami and SoHo.

“It’s definitely the coziest store in the fleet,” he said, “but if you look at the aesthetic, it looks a bit serene. It’s as clean and spacious as we could make it with mirrors on the back wall and a continuous railing the was inspired by the one we did in SoHo.” There are Japanese matte white tiles and a new lighting grid will be rolled out in future stores.

Although Elliott declined to say where and when he’d like to add more stores, he said there are definitely others in the works. “We’ve seen a great deal of success in brick-and-mortar,” he said. “Coming out of the pandemic, we thought people would want to shop, and that theory has proven to be right.”

He said his SoHo store, which opened in the fall of 2021, has been “extremely successful,” and Aspen is “off to a very exciting start. Looks like there are a lot of sneaky JE customers in Aspen,” he said. “In each store, whether we’re known in the market of not, we’ve been able to ingrain ourselves in the communities and build a profitable business, so we’re definitely not done.”