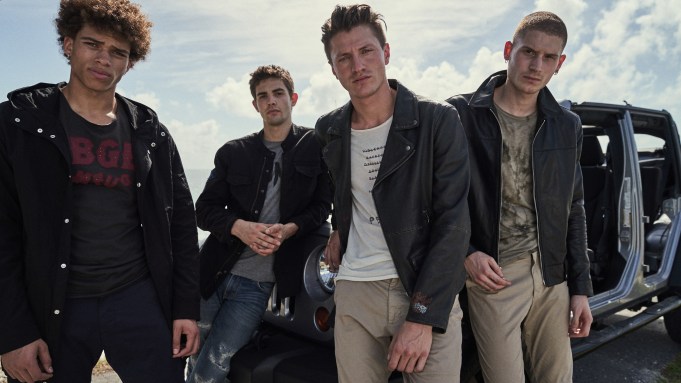 NEW YORK — In 2020, John Varvatos will mark a major milestone — the 20th anniversary of showing his first men’s wear collection.

Like any fashion label, Varvatos has experienced his share of ups and downs over the past two decades — ownership changes, painful reductions in staff, department store consolidation and changing shifts in fashion.

But after a couple of years of flux, the John Varvatos business is once again in expansion mode. The brand just entered the Middle East with its first retail store in Dubai and there are others in the wings. New product categories such as accessories, jewelry and swimwear are being added.

Star USA, the more-casual, younger and lower-priced line, has been completely revamped and will be unveiled at the Pitti Uomo show in Florence in January.

The architect steering these changes is Mark Brashear, who joined John Varvatos Enterprises as chief executive officer three years ago. Brashear has a long history in the men’s industry that includes Nordstrom, Façonnable, Hugo Boss and Michael Kors.

He’s also seen as a straight shooter and, as such, doesn’t duck questions regarding the uncertainty that surrounded the brand just two years ago when rumors were rampant that its majority owner, the private equity group, Lion Capital, was actively shopping the brand.

“In 2016, Lion seriously considered selling the company,” he said. “They did their due diligence, but by the end of that process, Lion and John decided to hold the brand.” Varvatos himself has retained a minority interest in the company.

At that time, Authentic Brands Group was considered the front-runner to acquire the label licensing-only model apparently didn’t sit well with Varvatos’ management. Lion is also a part owner of ABG.

So the decision was made to move forward with Brashear at the helm to steer the ship.

“We created a three-year strategic plan,” he said, “presented it to Lion and laid out what we planned to do.” The owners greenlighted the plan and it’s been full-steam ahead since then — although some hard decisions had to be made.

One was a significant workforce reduction in 2017, Brashear said, when 22 percent of the staff was let go. At the same time, the office space was “right-sized” to better fit the scope of the business.

Brashear likened it to a tree in the center of a yard. “Sometimes you have to prune the tree to make it beautiful.”

But he also knows that Lion’s ownership won’t last forever and many of the moves he’s making now are ultimately intended to position the brand as a better candidate for a sale in the future.

“Lion has been a great shareholder,” he said. “But we’re now at almost seven years of their ownership and the preference for private equity owners is short.” With any private equity company, “there’s always an exit, but we want to be in the best position possible first.”

So while it may not happen tomorrow, it’s likely that John Varvatos Enterprises will eventually find itself with a new owner, whether that’s ABG or someone else. But until that time, Brashear is focused on the task at hand — growing the brand as it approaches its second decade in business.

The brand was actually created in 1999 and for the first few years was associated with Nautica Enterpises. When VF Corp. bought Nautica in 2003, Varvatos went along for the ride. But the brand struggled for attention under VF’s ownership and in March of 2012, VF sold a majority stake in the business to Lion Capital for an undisclosed sum.

Brashear said that through all the changes, there’s one thing that has remained constant: the brand’s “rebellious” spirit. “That gives us a distinct positioning.”

The designer’s rock ‘n’ roll aesthetic continues to define the brand, but as it has expanded into other product categories, its style has “matured,” Brashear said. “We’ve kept the essence, but we’re taking it to a more-youthful customer,” he said.

“John as a person is rock ‘n’ roll, but as a brand, it’s music,” Brashear said. “And guys love music. Our stores are man caves and hang-out spaces filled with iconic things that guys can relate to. So once he comes into that club, we create an experience that gets him to stay.”

He said the brand is having one of its best years ever, with sales up 6 percent. He declined to provide a volume figure, but sources estimate it had sales of around $325 million at retail and an operating loss of around $15 million in 2017. Brashear would say only that the company has “worked hard and achieved significant business performance improvements” — a trend he’s hopeful will continue.

“We’re growing wholesale and our profitability is the best it’s been in many years,” Brashear said. “We attribute that to keeping the creative juice balanced with improved talent and processes.”

Varvatos remains as chief creative officer and has design chiefs below him that oversee each of the divisions. Brashear said that unlike other designers whose names remain on the door but who are no longer active, Varvatos continues to be active, both in the creative as well as the business end of the brand.

“John is an amazing businessperson, too,” Brashear said of the designer, whose background includes Ralph Lauren and Calvin Klein.

Overall, 65 percent of today’s sales derive from the John Varvatos Collection with the remainder coming from Star USA, the collection that is targeted to the department store channel. Brashear said with Varvatos’ oversight, a new creative team has offered up “new views on color and silhouette” for Star that are already resonating with the brand’s wholesale partners. Star USA is carried at Bloomingdale’s, Neiman Marcus, Nordstrom and other stores.

“Our wholesale partners love Star USA because it offers a designer collection at a competitive price,” he said.

He said the brand has been around for over a decade and “there hadn’t been a refresh in all that time.” So the team retained the essence of the label, cleaned it up and made it more elevated to better compete with other contemporary sportswear brands on the retail floor such as Rag & Bone, Theory, Vince and All Saints.

Star also offers tailored clothing under a new licensing deal with China’s Dayang Group. The line is off the rack now, but a made-to-measure option will be added next spring.

In addition, about a year ago, the brand’s longtime collaboration with Converse ended and the footwear business was brought in-house under a new umbrella: Bootleg by John Varvatos. The first product was introduced for spring and “it’s been gangbusters,” Brashear said, pointing to the strength of the casual denim-friendly sneakers.

In addition to Bootleg and Star USA, the halo offering is the John Varvatos Collection, which Brashear described as a “refined lifestyle collection.”

With the exception of a few top-tier department stores, the Collection is sold in the company’s 34 retail stores and online. “Our own retail accounts for 85 percent of the Collection business,” Brashear said.

Seventy percent of the overall John Varvatos Enterprises business comes from direct-to-consumer. The 30 percent of sales that derive from wholesale is viewed more to “get awareness” of the label, Brashear said. “It exposes people to our brand and gives us more tentacles to reach customers.”

Within its stores, six are outlets and three are operated by partners in Canada (Throat Threads), Russia (Crocus Group), the United Arab Emirates  (Emaar) and Thailand (Central Trading), “where we don’t have local experience,” Brashear said.

A second store is slated to open in Moscow city center in March with a second store at the Dubai Hills Mall on top for the spring of 2020. A second store in Mexico, with a yet-to-be-revealed partner, is also on tap for Guadalajara for April. The company owns the only other Mexican store in Masaryk.

In the fall of 2019, a partnership with Shinsegae Department Stores in South Korea will be expanded 19 doors in the fall of 2019, and Brashear sees “huge potential” for China where it currently has no presence. “Our goal is to launch with digital early next year for apparel, eyewear and fragrance.”

Closer to home, the company will open a fourth store in the Los Angeles market in Santa Monica in May.

Brashear said the plan is to grow the brand both domestically and internationally. In fact, the largest store in the world is located in London, where Varvatos now has two units.

In the U.S., the growth strategy is three-pronged: brick-and-mortar retail, digital and wholesale. There are a couple of “white spaces” where he’d like to add stores and that includes Atlanta and Chicago, he said.

Although Varvatos had dabbled in women’s wear for a few years, there are no immediate plans to reenter that business. “It’s likely we’ll do it someday,” Brashear said, “but we want to make sure we’re super-successful first so we’re taking what we do best and maximizing that first. It’s where we’ll have a greater likelihood of success.”

Although there won’t be a show this summer, Brashear said it’s “highly likely” that the designer will return to Europe to celebrate his 20th anniversary in two years. “John believes in disruption, that’s who he is, he’s a rebel spirit.”