The store is more open and features separate areas for custom. 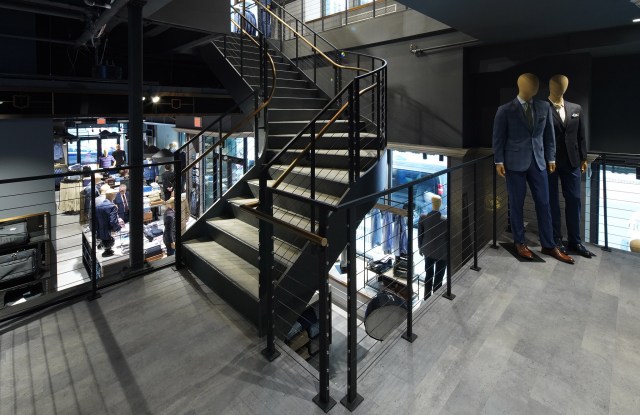 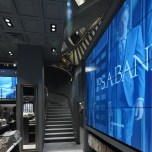 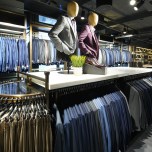 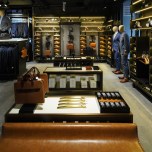 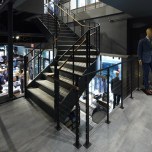 NEW YORK — Jos. A. Bank has taken the wraps off a store design that is intended to be a more visible statement of its brand positioning.

The 13,800-square-foot flagship on Madison Avenue and 46th Street had been closed since June for the revamp and had a soft reopening on Tuesday. The official opening event is on March 19.

“We wanted our flagship in New York to represent a unique space as iconic as Madison Avenue,” said Mary Beth Blake, brand president for the Jos. A. Bank division of Tailored Brands Inc. The retailer was founded in 1905 in Baltimore and purchased by Tailored Brands, the former Men’s Wearhouse, in 2014.

The Madison Avenue store opened in 1994 and had not undergone a revamp for 25 years, Blake said.

The first hint that something has changed is seen on the awnings, which tout “the new tradition” that will be found inside. Upon entering, the customer finds 17-foot-high ceilings, custom furniture and fixtures in rich brown woods, Corian stone tops, brushed copper hardware and antique mirrors. Features intended to speak to the brand’s heritage include metallic wall coverings and architectural ornaments as well as a map of Baltimore on the walls of the staircase.

The main floor merchandises mainly sportswear and furnishings with a few sport coats included. The assortment is broken down into the brand’s three collections: Traveler, which represents around 50 percent of the business, she said, and the 1905 younger-skewed collection and the more classic Reserve luxury label, each of which account for around 25 percent of sales.

The main floor also features extensive shirt and tie walls, which is new for the retailer. The shirts are merchandised by size and fit and there’s an area dedicated to Reserve custom shirts, which are available in 300 swatches and retail for $100 to $150. “We’re getting more traction with our custom shirts and they will be a significant business in 2019,” Blake said.

A mezzanine features a lounge for custom and formalwear fittings with oversize leather ottomans and elevated fitting rooms.

The second floor is dedicated to tailored clothing, shoes and tuxedo rentals. There is a second seating area with leather chairs, stools and ottomans on this level as well. And the store provides an inside look at the tailor shop, which is housed behind glass in the rear.

While the store still hangs some 1,200 suits, the updated design is more open and incorporates more mannequins and seating areas.

And throughout the store, video walls were added where company messaging is displayed.

To address the fit part of the equation, the company built two custom shops in the store where customers could choose suits, sport coats and dress shirts and customize them to their needs. “Custom has been a significant growth driver for us,” she said, adding that she expects the category to continue to grow this year.

The custom shopper tends to spend more, shop more frequently, be younger and is often new to Jos. A. Bank. In fact, Millennials are more than twice as likely to shop for custom in one of the company’s 490 stores, she said.

For comfort, the Jos. A. Bank mix is centered around product infused with technical features such as 37.5 temperature regulating fabrics and Brrr Comfort cooling fabrics.

While the focus is on the new store, Blake said Jos. A. Bank’s online presence continues to grow as well and is more highly penetrated than its sister brand, Men’s Wearhouse. Customers are drawn to the company’s reserve-online-try on or pick-up-in-store feature as well as its Live chat capability where shoppers are connected with a local sales associate.

The design was also utilized in two stores in the Chicago and Memphis markets last year, but the Madison Avenue unit is much larger. “They have the same design aesthetic and fixtures, but this is on steroids,” she said.

Blake said so far, 70 percent of the fleet has gotten new flooring and walls and an update in color palette and metal details. Another 100 stores will be refreshed this year and 150 in 2020. Custom shops, which are already in 350 stores, will be added to the remainder.

To coincide with the opening of the store, Jos. A. Bank will launch a “Get Ready for Greatness” brand campaign. Brand advertisements are a relatively new vehicle for the company and break with its historical use of the platform for promotions.

“We created ‘Get Ready for Greatness’ to speak to the modern man about style and comfort,” said Blake. “This campaign is our opportunity to tell the Jos. A. Bank customer that feeling great in your clothes can lead to being prepared, getting things done and even moments of greatness.”

Jos. A. Bank has gone through more than a design refresh since it was purchased by Tailored Brands for $1.8 billion. The retailer had been mired in a highly promotional spiral with an eye-popping buy-one-get-seven-free incentive offered to customers at its most aggressive.

Tailored Brands systematically set out to break the cycle, which took its toll on the company as a whole. While results have stabilized at Jos. A. Bank, holiday sales were not great. In January, the corporation updated its outlook for the fourth quarter and scaled back its earnings per share expectations based on lower-than-anticipated results at the division.

While comparable-store sales for the nine-week period ended Jan. 5 increased 0.1 percent, the company said it was expecting comps for the quarter to the flat versus previous guidance of an increase in the low-single-digits.