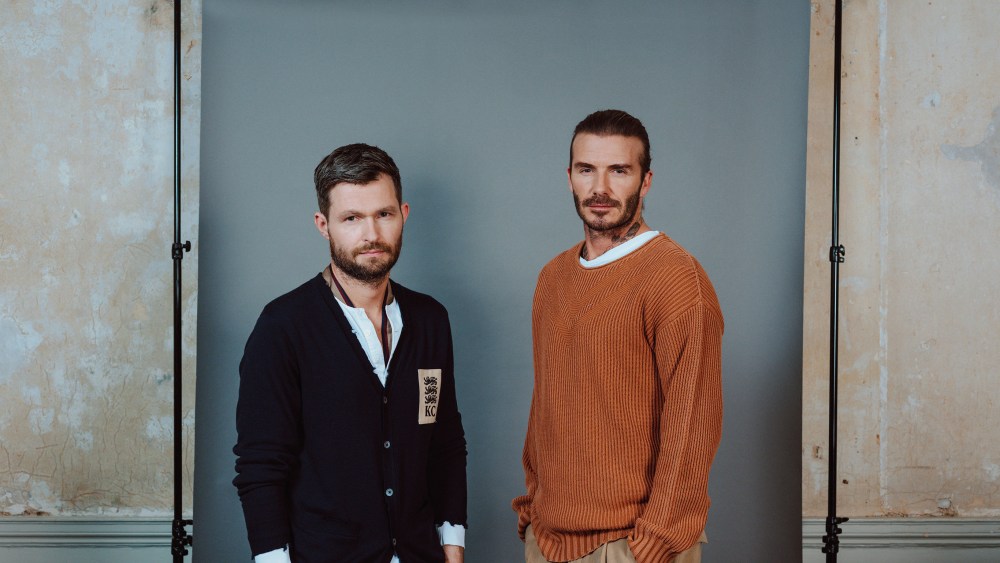 LONDON — Barring the giant black-and-white image of David Beckham wearing a coat from the fall 2017 collection, the new Kent & Curwen store in Covent Garden is all subtle nods to Englishmen, their love of sport and rough-around-the-edges charm.

The 1,200-square-foot store is located on the ground floor of the Victorian-era Adelphi School for Boys, but that’s only part of its old-world charm.

Clothing racks, drawers and the paneling in the changing rooms are made from scratched and scarred reclaimed wood, while dark-stained oak panels have been laid on the floors and shiny white and mint green butchers’ tiles cover some of the walls.

There are leaded windows, raw brickwork, steel and brass fixtures and details, while the few bits of mid-century modern furniture — chairs and stools — have been covered in brown wool Fox Brothers fabric, similar to the suits and coats hanging in the store.

“We didn’t want the nods to London and to Britain to be too profound or too pastiche. It’s the clothes that needed to be prominent,” said Daniel Kearns, creative director of the brand, during a walk-through. “And we didn’t want it to be an intimidating place.”

Even the big picture of Beckham — from the latest ad campaign shot by Willy Vanderperre — is not front and center. Instead, it hangs from a side wall behind a panel made from Victorian glass panes in the area selling stacks of rugby shirts with the brand’s signature rose patch; T-shirts, and cable-knit sweaters.

The Paris-based firm Architecture + Associés, which has worked on retail projects with brands such as Dior, Comme des Garçons, Viktor & Rolf and Diesel Black Gold, designed the interiors. Oxford Oak, the new candle and room fragrance that smells of oak moss and autumn bonfires, wafts around the cozy space.

Beckham said he’s loving the neighborhood. “Daniel and I had been searching for the perfect location for some time and believe we’ve found it on Floral Street. A longtime, iconic London shopping destination, Floral Street is at the heart of this great city and we’re excited for Kent & Curwen to be at the forefront of it.”

While 12 Floral Street may be the first new-generation Kent & Curwen store in Europe, the brand has begun rolling out the concept in China and Hong Kong, where it has about 130 stores.

The company is owned by the Hong Kong-based Trinity Group, which has a business partnership with David Beckham’s firm Seven Global. Beckham and Trinity relaunched K&C last year as a contemporary lifestyle brand inspired by Britain’s collegiate culture, its sporting clubs and sartorial traditions.

The British brand was founded in 1926 and has roots in the manufacture of sports uniforms, for clubs, colleges and universities. It pioneered the cricket sweater, and the archives are packed with regatta jackets, old Eton caps, V-neck knits and sturdy topcoats.

Before Beckham got involved, K&C was revived in the U.K. briefly by Trinity and one of its former license partners as a tailored clothing brand with a shop that was open briefly at No. 2 Savile Row.

Ray Clacher, executive vice president at Trinity Ltd., said that while the new store concept may be an important milestone for the brand, he’s treading with caution and doesn’t want any retail white elephants.

“We need the store to make money — and be profitable — from the get-go,” said the straight-talking Clacher, adding that the brand plans to roll out units that are under 2,000 square feet that carry a “tight portfolio” of stock.

He said keeping K&C lean and nimble will be the key to its success going forward and that limited editions and seasonal one-offs have been performing well for the brand online and on the shop floor.

“We are not Supreme, but there are lessons to be learned from brands like Supreme in terms of limited-edition runs of product. The days of twice-a-year spring and fall collections are behind us.”

Clacher said the bright red limited-edition baseball bomber jacket with hand-sewn patches was done for an event that Beckham did in Shanghai. The brand did a run of 10, and they sold out immediately. He added that K&C will be looking to work with its wholesale partners such as Selfridges, Harvey Nichols and Saks Fifth Avenue on exclusive limited editions.

There are also plans for more stores: Clacher is hoping to secure a space Williamsburg, Brooklyn around Bedford Avenue and Berry Street. “The neighborhood has that Floral Street flavor and we’re more about the Willamsburg shopper, the Meatpacking shopper — that’s more where the brand is going. We don’t want to be a Savile Row brand.”

The London shop will open formally on Nov. 6 with a press event, while a fleet of branded black London taxis will be covered in the K&C logo.