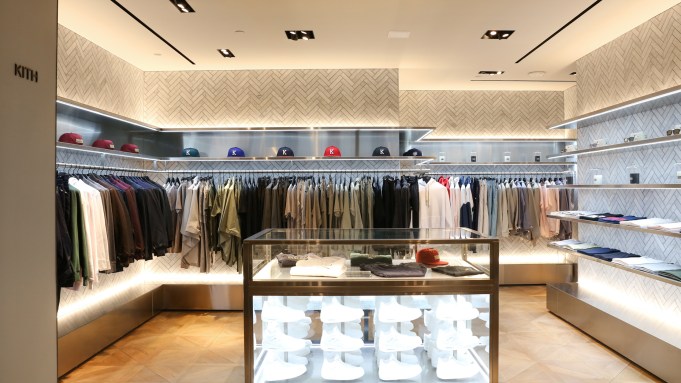 It all started with Ronnie Fieg’s mother.

She’s a diehard Bergdorf Goodman shopper and had always dreamed of her son having a shop in the upscale store. And on Tuesday night, that dream became a reality.

“This is an emotional night for me for many reasons,” said Fieg, the founder and chief executive officer of Kith, the buzzy street-inspired footwear and apparel brand.

Pointing to the brand’s first in-store shop and capsule co-branded Bergdorf Goodman collection on the third floor of the men’s store, he added: “This is one of the greatest accomplishments for the brand on our five-year anniversary.”

The shop, located across from Thom Browne and next to Dries Van Noten was designed by Kith’s favorite collaborator, Snarkitecture, which is also responsible for Kith’s own three stores in Manhattan and Brooklyn. It includes signature elements such as a case of casted Air Jordan IV’s, herringbone marble walls and a custom Carrera marble bench. “We kept our design language intact,” Fieg said.

But it’s a bit of a departure for Bergforf’s. President Joshua Schulman, who cohosted an intimate dinner in the store Tuesday night to introduce the shop, said that the addition of Kith “broke every rule. We usually start with half a rack. And we’ve never let someone use our logo before,” he said.

But in order to snag the wholesale exclusive for Kith, which he credited to Melissa Lowenkron, senior vice president of men’s, Bergdorf agreed to make a few exceptions.

Schulman said the addition of Kith, which has a rabid cult following of sneaker heads and fashionistas, is part of the store’s ongoing quest to “find and nurture the most important names in men’s fashion.” Brunello Cucinelli, Tom Ford, Thom Browne and others “all debuted here,” he said.

Schulman said Fieg’s “understanding of his customer and his vision are very similar to the men’s wear stars who have become household names that were discovered at Bergdorf’s.”

Bruce Pask, men’s fashion director for the retailer, said the addition of Kith is just one example of how the landscape of the third floor has changed over the past two years. More streetwear-inspired labels are showcased, including Fear of God, Off-White and John Elliott, “so it made sense [to add Kith]. It brings a lot of excitement to the floor.”

The exclusive Bergdorf Goodman capsule, Kith x Bergdorf Goodman, which used the store’s logo on baseball caps, sweatshirts and other products, marks “the first time the Bergdorf Goodman logo was used on the exterior of a garment,” Pask said. The capsule offers six limited-edition styles, including Kith’s classic Williams hoodie and crewneck, a Windbreaker, pants, a T-shirt and a wool cap. Retail prices start at $75.

Fieg said the capsule, and the entire collection being offered at Bergdorf’s, offers up some “Kith classics that pay homage to the luxury sportswear of the late Eighties-early Nineties.”

Schulman joked that he was ready to don one of the sweatshirts, but it would need to be “embroidered with my initials.”