Ronnie Fieg has reopened his Brooklyn store, which is designed by Snarkitecture and includes Kith Treats, a cereal bar. 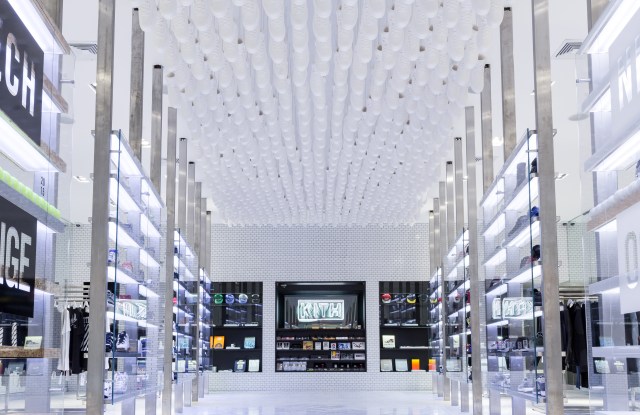 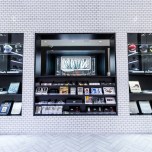 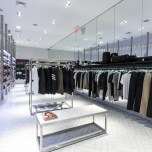 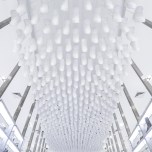 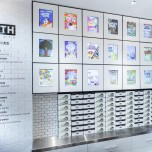 BROOKLYN, N.Y. — Talk about being meticulous.

Ronnie Fieg considered every detail in the redesign of Kith’s Brooklyn location on Flatbush Avenue, which opened Monday.

The store, which was designed in collaboration with architecture firm Snarkitecture, is full of Instagram bait for Fieg’s sneaker-obsessed following.

When shoppers enter the store, they are greeted by a Kith logo on a white marble herringbone floor, which is perfectly positioned for the brand’s snap-happy customers to shoot from above alongside the sneakers they’re wearing. On the ceiling there are 750 suspended cast-Air Jordan II sneakers, a design element that’s also featured at Fieg’s Manhattan store, which displays cast-Air Jordan I sneakers.

“The way I look at my brand and life is like a timeline,” said Fieg, who added that his women’s store, which is set to open in SoHo this December, will be decorated with cast-Air Jordan III sneakers.

Footwear from brands including Nike, Asics, Buscemi and Adidas are displayed on both sides of the store behind glass walls, lending a gallery feel to the boutique. On the other side of the wall customers can pick up the sneakers, which are merchandised near complementary apparel from brands such as John Elliott + Co, Off-White c/o Virgil Abloh and Y-3.

“I think this type of cross merchandising is important,” said Fieg.

Also important to Fieg is cereal, and the store redesign includes the addition of Kith Treats, a cereal bar, cafe and ice cream shop.

“I’ve been obsessed with cereal my entire life. I wanted to open a cereal shop before I got into footwear and apparel,” Fieg told WWD. His combination of choice, which customers can order from the specials menu, is a mix of Frosted Flakes and Cocoa Puffs topped with mini marshmallows, crushed Oreos and whole milk.

The bar, which serves La Colombe coffee, is a place for sustenance, but it’s also a collector’s haven. For around $7, customers can build a box of cereal, which is packaged in Kith-branded Mylar bags and served out of a collectible mini-shoebox that comes with a Kith-branded spoon — that seconds as a straw — along with a Kith-branded glass bottle of milk.

These shoeboxes will change every six to eight weeks and act as platforms for brand collaborations. The first is with Nike and U.S. tennis player Andre Agassi — who will make an appearance at the store on Tuesday — in anticipation of the U.S. Open. The shoeboxes contain a proof-of-purchase ticket that will allow customers to redeem a prize once they’ve collected four within six to eight weeks. The current prize is a Nike- and Kith-designed white tennis ball that’s displayed in a plexicase.

This partnership is also tied to an archive section at the front of the store, which currently features Agassi and Pete Sampras sneakers, but will switch over to include sneakers from Fieg’s previous collaborations with brands including Asics and Puma.

A VIP and personal shopping room that’s accessible to 50 card-carrying friends and family of the brand sits at the back of the store.

“I wanted to create a space where you could have a meeting or even watch a movie with a girl,” said Fieg.

Last October, Fieg expanded his SoHo store, which is located in the back of Atrium. According to Fieg, both the Brooklyn and SoHo shops now carry the same merchandise.

“The feel I was getting from Brooklyn was that they needed this. The people that were coming in were expecting the New York City experience,” Fieg said.

The shop will also carry Kith’s in-house brand, which the designer said is continuing to grow. Although he doesn’t wholesale the line — with the exception of exclusive capsule collections for retailers including Colette and Dover Street Market — he expects it will be a bigger part of the business.