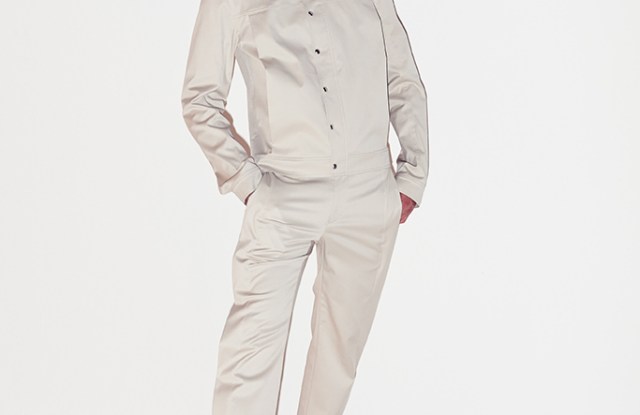 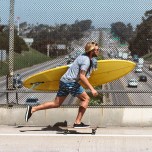 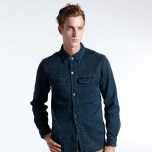 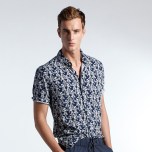 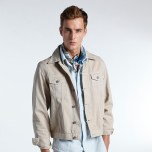 With improved late spring-summer sales as the backdrop, men’s specialty stores converged on New York City this week to see the latest wares for spring 2016 at the Project, Liberty Fairs, Capsule, Agenda and MRket shows. Here are a few of the notable brands creating buzz at the shows.

Named for the year the company was founded, the Dickies 1922 collection is based on authentic replicas of pieces from the Texas-based company’s archives.

The pants, shirts and jackets are manufactured in the U.S. by workers who replicate the techniques and materials used in the original garments.

For instance, a pair of 9-oz. duck pants, originally purchased in 1933 and returned to the company in 1947, include the rips and tears in the original garment.

Distressed twill pants, coveralls and an indigo collection of short- or long-sleeve shirts in ticking stripes and gingham patterns are also offered.

“The whole collection is done to honor workers,” said Ann Richardson, the sales rep at the booth at Liberty Fairs.

Prices range from $300 for the Cramerton twill pants, $135 for the painters pant, $120 for the paint-splattered shorts and $165 for the 1933 replica duck pants. The indigo shirt collection goes from $100 for the short-sleeve gingham to $185 for the ticking stripe range. — Jean E. Palmieri

For spring, Ones Stroke designer Terunaga Suzuki wanted to create a collection of casual apparel with tailored details. The Tokyo-based brand, which is known for its military-inspired aesthetic, showcased a denim poncho with fringe, a ripstop linen jacket with an extra-large hoodie and an indigo floral jacquard suit. Another highlight was the white knit patchwork sweater.

The made-in-Japan line, which retails from $150 to $800, is currently stocked at Ron Herman, East Dane, Assembly New York and Atrium. — Aria Hughes

Tom Lipop, the designer behind T.Lipop, is in his sixth season and has his sights set on the U.S. market.

“It’s a big market and it makes sense to come out here now,” said the London-based Lipop, who collaborated with U.K. fast-fashion retailer River Island on a capsule collection in 2013. Lipop focuses on the cut of the garment and the collection, which is manufactured in Italy, features 12 different shapes that are specific to the brand. The spring line is a lighter take on the fall offering and includes a Japanese silk oversize blazer, cropped trousers without a side seam and sweaters knit with bold photographs.

Duck Head
Since being acquired by Prospect Brands LLC, a private equity firm, in 2013, Duck Head has quietly been working to expand its reach. The Greensboro, N.C.-based label can trace its roots to 1865 when two Nashville brothers turned the heavy canvas used for Army tents into sturdy work pants and overalls. Although it has changed hands a couple of times over the years, the brand still has a loyal following in the South and has started to make inroads in other areas including the Northeast, where it’s carried in Murray’s Toggery Shop in Nantucket and it will soon be added to Bloomingdale’s and Nordstrom.

Today, the brand has branched out beyond its signature chinos into washed polos, lisle knits, oxford shirts and other “classic American sportswear” items, according to Tom Nolan, Prospect’s chief executive officer.

Duck Head drove an Airstream trailer and a vintage Jeep to New York to add some interest to the booth at the MRket show. In addition to the classic chinos, Duck Head has “blown out its wovens program” and added swimwear for spring, Nolan said.

“A guy can pull these out of their closet 20 years from now and still look good,” Nolan said. “We’re not chasing fashion.” — J.E.P.

Sal Cesarani has been a fixture in the men’s industry for decades. He’s a member of the Council of Fashion Designers of America and has won the Coty Award three times.

For spring, the designer teamed with William Fung of Loft 604 to create a line of knitwear. The culmination of that collaboration was shown at the MRket show this week.

Targeted to better department and specialty stores in the U.S. and Canada, the line included sweaters and sport-sweater separates in natural fibers including cashmere, silk, linen and cotton.

The styling of the collection is a grown-up version of athletic wear and includes tennis sweaters, sweatpants, shorts and jackets that “marry contemporary with traditional,” Cesarani said.

There’s a blazer shirt with contrasting trim, a safari jacket and cozy shorts in neutral colors. The line is thematically divided into four groups: marina, mountain, tennis and athletics.

Freemans Sporting Club is more than just a run-of-the-mill men’s specialty store. The hip New York City-based retailer and wholesaler, which also operates a trendy Manhattan restaurant and bars as well as a popular barbershop, has also put down roots in Japan where it operates three stores.

That Asian association resulted in the creation of an indigo capsule collection that was manufactured in Japan and was brought to the U.S. for the first time for spring at the Project show.

Whether at home or abroad, the company’s ethos is: “Made Local, Buy Local,” according to Kent Kilroe, managing director. And it was that mission that prompted the creation of the capsule for the Japanese market. “We kept it tight and thought we’d see how it works here,” he said.

The collection features sashiko stitching, traditionally used on kimonos, on a soft blazer in linen and cotton with matching short and vest, as well as a camp shirt, bomber and a “shop coat,” which Kilroe described as “an easy trench.”

Other pieces in the capsule include two cotton indigo-checked work shirts and a linen shirt in a camouflage print.

“The silhouettes are based on styles from the U.S.,” he said.

Chris Manley, a 20-year apparel veteran, had had enough of the corporate life when he launched Surfside Supply Co., a casual sportswear brand with a relaxed beach-inspired sensibility in 2013.

The line, which he described at the start as similar to Tommy Bahama but targeted to a younger guy, brought its washed T-shirts, polos, cozy knit pullovers and shorts in yarn-dyed heather, swimwear and button-down shirts to the Project show. The collection also included drawstring linen beach pants and hoodies.

“We’re known for our colors and washes,” said sales rep Andrea Albanese. “It’s for the relaxed lifestyle; it fits really well and it’s not too serious.”

Surfside, which will also branch out into women’s wear for spring, offered photorealism prints on its swim shorts, a plush fleece program in marled yarns, and washed garment-dyed cargo shorts.

Jean Shop is best known for its denim made in New York City, but the brand has recently started selling a more affordable, imported collection manufactured in China.

For spring, Park designed around the theme of paper and stationery. Drawstring sweat shorts feature a scissor, paper clip and push-pin pattern, and a pleated men’s shirt is updated with Tyvek material, which is a new fabric for the brand.

Other key items include an origami hat and visor and a yellow raincoat with a scissor graphic.

This Australian-based surf brand launched in the U.S. in 2010 with a specific collection for the American market, but the company globally aligned its product in 2012.

Rhythm, which also produces women’s swimwear and apparel, specializes in men’s cotton board shorts with Australian heritage prints. T-shirts feature contrast breast pockets made from the same patterns that appear on board shorts, while cotton button-down shirts come in a longer silhouette.

The brand is currently carried in U.S. retailers including Nordstrom, Pacific Sunwear and Free People. — A.H.

This New York-based brand previewed at Capsule when it originally launched in 2007 but took a hiatus from the trade show to present at Pitti Uomo and within its New York City showroom.

Now, the made-in-the-U.S. brand is back and designer Takeshi Ohfuchi previewed his American workwear-inspired pieces.

Key items from the spring collection include a seersucker utility jacket, a vest modeled after a vintage hunting style, workwear jackets made from iridescent fabrics and cotton shorts with ditsy prints.

The collection, which is sold at stores including Steven Alan, Union Made and Fred Segal, retails from around $50 for a graphic T-shirt to $600 for outerwear. — A.H.

Post-business school, Guillaume Gibault wanted to launch a fashion business within a category that he believed needed newness. He chose men’s underwear and introduced Le Slip Francais in 2011.

The line now includes men’s and women’s swimwear, socks, basics and pajamas, all made in France.

The line, which is sold at Le Bon Marché and Galeries Lafayette, retails from $40 for underwear to $140 for a pair for swim shorts. — A.H.

TSPTR, which stands for truth, symmetry, pleasure, taste and recognition (the five points of modernism) was formed two years ago by Russell Gater and Daniel Savory, the team behind U.K.-based streetwear brand Trainerspotter.

For TSPTR, the designers acquire licenses from classic U.S. cartoons such as Peanuts and Popeye and place the vintage artwork on T-shirts, sweatshirts, shorts, hats and outerwear, which is made in Turkey.

A surfer Snoopy patch embellishes a navy short-sleeve T-shirt while larger Peanuts artwork is placed on long-sleeve sweatshirts. Popeye artwork, which is a new license for the brand, is also featured on T-shirts.

The collection is carried at retailers including Selfridges, Colette and Kinfolk. T-shirts retail from $40 to $60; hats retail from $65 to $70; sweatshirts are priced at $100, and outerwear averages $150. — A.H.