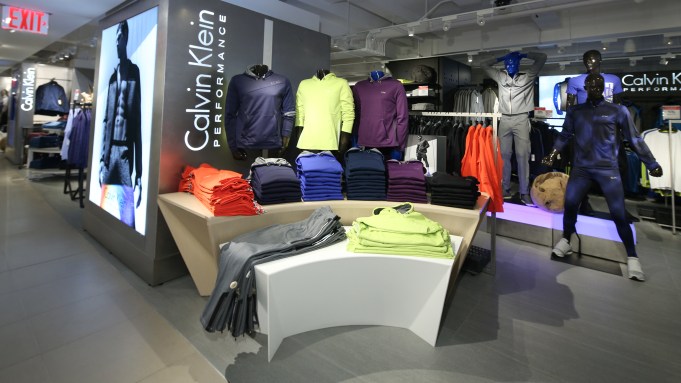 NEW YORK — It’s done. After four years of work, the renovation of the men’s department at Macy’s Herald Square has been completed. The final piece was the former 1 ½ space — now renamed the Mezzanine — and the third floor, which was finished over the summer.

“We’ve completed the transformation of what I believe is the world’s largest men’s store,” said Richard Arnstein, executive vice president and general merchandise manager of men’s, in a walk-through Thursday morning.

The men’s renovation is just one piece of the company’s massive four-year, $400 million revamp of the 1.2 million-square-foot Herald Square flagship. Throughout the project, the goal has been to give more space to the store’s biggest brands, eliminate weaker players and elevate the shopping experience with enhanced lighting, upscale fixtures and materials, better service and the latest technology.

“Our vision for the men’s store started over four years ago and included several key objectives,” Arnstein said. “We’ve merchandised the floors by lifestyle and how the customer shops. We think we’ve created a unique and fun experience.”

He said each of the seven floors has a distinct design and identity. The lower level is devoted to underwear, socks, belts, accessories and sleepwear. The main floor is dress shirts and neckwear, fragrances and grooming and other accessories. The newly completed Mezzanine is designer and contemporary sportswear; the second is devoted to traditional sportswear; the third is young men’s and denim; the fourth is activewear and shoes, and the fifth floor is tailored clothing and outerwear.

“We have three contiguous floors of sportswear,” Arnstein said, “with each floor geared to individual lifestyles.”

The Mezzanine is a major improvement over the cramped and cluttered 1 ½ department, which targeted young men. The ceiling was raised, the lighting improved and the design of everything from the floors to the fitting rooms has been enhanced. Some of the beams have also been exposed to offer a more industrial feel.

The Mezzanine caters to a modern shopper and is anchored by Calvin Klein, Boss Hugo Boss, Michael Kors, Kenneth Cole, and the private brands INC and Alfani. There are several additions, including Jack Spade, Andrew Marc, Michael Kors, Just Cavalli, Theory, Vince Camuto, Moschino and All Saints. Other brands on the floor include Versace Jeans and Tallia; the new personal shopping initiative, My Stylist, is also located here.

In all the shops, the brands and Macy’s have installed video screens and high-tech elements to elevate the experience. The Perry Ellis shop, for example, is being billed as the Shop of the Future and includes interactive floating mirrors with embedded proximity sensors and custom LED hardware.

On the renovated third floor, the atmosphere is different, from the music to the architecture, and targeted to a younger man.

There are a slew of new brands here as well, including Diesel, True Religion, Seven Diamonds, Seven For All Mankind, G-Star and Hudson’s. This “complements” returning labels including Levi’s, Buffalo, Denim & Supply, Sean Jean, Armani Jeans and DKNY, Arnstein said. Superdry and CK Jeans are also in the mix.

“We probably hold more jeans on this floor than any store in the world,” he added, noting that there are around 15,000 pairs on display.

The Levi’s shop is also technologically advanced and includes a series of touchscreens where shoppers can check out the latest projects or view maps of popular spots around the city. It also has a laser bar where customers can add custom designs to their jeans.

At the rear of the floor is a section devoted to surf brands including Hurley, Volcom, Billabong, Quiksilver and American Rag Cie. There’s also a “design your own T-shirt” shop as well as an upscale pizza bar that will open later this week next to the DKNY area.

“We’ve integrated technology into the new shops and we’ve created a complete shopping experience,” Arnstein said. “We have such a diversity of customers in this building — international and domestic tourists, regional shoppers, people from the suburbs — it’s very eclectic and we believe we’ve put together an assortment that appeals to those customers.”

Although he declined to speak about the performance of men’s within the company, Arnstein said he is upbeat about the future in light of the renovation’s completion in time for Christmas.

Macy’s does not break out figures for its men’s business, but the men’s and children’s business at parent Macy’s Inc. — including Bloomingdale’s — represented 23 percent of the group’s $28 billion in sales in 2014.

“We’re very optimistic as we enter the holiday season with all the newness that we have presented, from the product offering to the trend statements to the technology. We thinks it’s going to be a good holiday,” Arnstein said.