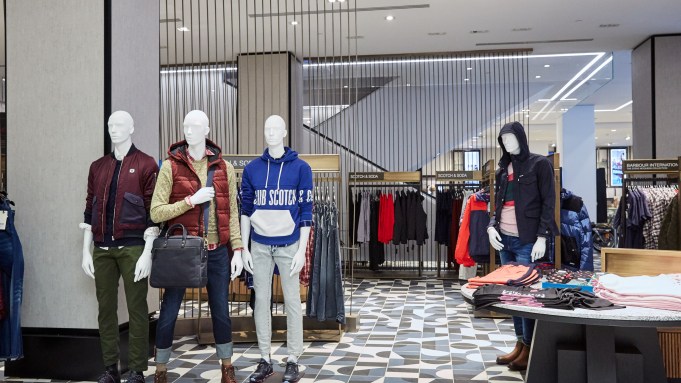 There’s a new park in New York City, but it’s not a green space in one of the boroughs. This one is located in the middle of the main floor men’s department at Macy’s Herald Square.

Last week the department store quietly took the wraps off Park, a newly imagined and elevated men’s area that brings together a selection of new and existing brands in a highly visible 14,500-square-foot space on the Seventh Avenue side of the floor.

Park, which now anchors the large main floor and measures 4,500 square feet, takes over the space previously devoted to dress furnishings, which have been relocated to the fifth floor alongside tailored clothing.

“We had a soft opening last Thursday and we’re happy with the results so far,” said Mark Stocker, general business manager for men’s and kids, during a walkthrough with WWD.

He said the team at Macy’s started brainstorming over a year ago about how to best “evolve” the men’s store to be part of the “mini-revolution” occurring in retailing today. Customers are seeking an ever-changing assortment of product that is new and different. Macy’s is answering that demand with Park, which will rotate every eight to 12 weeks.

“The idea is that every time the consumer comes in, he’ll see something new,” Stocker said. “And if he doesn’t buy it now, it may not exist eight to 12 weeks from now.”

Around 75 percent of the department is open now and the remainder will be completed by the middle of October. It will include the addition of a bar where shoppers will be able to hang out.

“Our intent is to create an experience for customers, and a gathering space,” he said.

Although the space is new, Stocker said that he’s already seen men spending more time in the department than they had in the past when they would either just pick up a tie or dress shirt and go back to work, or merely walk through to get to another department. “We’re seeing a lot more ‘dwell’ time in the space,” he said.

“The sense of discovery was not happening on this floor,” added Durand Guion, group vice president of the fashion office for Macy’s.

For the launch, Park and its adjacencies offer an assortment to address almost every need, from updated tailored clothing and ath-leisurewear to high-end sneakers and tech products.

“We are showcasing trends and brought in new brands as well as elevated product from brands that already existed in the store that lent themselves to this environment,” Stocker said.

That includes Coach apparel and accessories as well as Scotch & Soda. “We had Coach in women’s, but it’s new for us in men’s,” he said. “And with Scotch & Soda, we’re going after a younger, more trend-right assortment.”

There are classic brands such as Barbour’s Steve McQueen collaboration along with faster fashion labels such as Desigual and AR21, the vintage skewed offering from American Rag.

New to the department are J Brand, 7 for All Mankind, Fidelity, Naked & Famous, Goorin Bros. and Brooklyn Brigade. Other brands include Avirex, Michael Kors Tech, Perry Ellis America and an elevated Levi’s assortment that Stocker said “doesn’t exist anywhere else.”

In addition, the shop offers the Tommy x Lewis collaboration collection from Tommy Hilfiger and Lewis Hamilton, as well as Cavalli, Moschino and Paisley & Gray Gold. Macy’s also created an elevated assortment of its INC private label for the space under the INC Onyx label. Stocker described it as offering “more fashion fabrics and higher AURs [average unit retails].”

B8ta, a technology start-up that Macy’s bought a stake in last year, has been relocated next to Park since the retailer believes this customer is the same one who will pick up one of the tech gadgets in the shop. “It’s a logical adjacency,” Stocker said.

Ditto for the sneaker outpost on the other side of the Park area. Although Macy’s partners with Finish Line to provide its athletic shoes, the footwear here is more designer-focused and includes offerings from Armani, Versace, Coach, Kors, Ralph Lauren, Karl Lagerfeld and Roberto Cavalli. “We look at this as an opportunity to learn,” Stocker said. “We’ve never had AURs north of $500 before so we’re playing around with it.” This assortment will also be changed every few weeks, he said.

In terms of aesthetics, Macy’s has created a distinct look for the Park space including updated floors, light wood, bronze fixtures and marble tables that can be adjusted depending upon the brand and the product offering. No specific shops have been built.

“All the spaces are intended to evolve, and the fixtures are agnostic,” Stocker said, adding, “We created an environment that is suitable to this concept.”

Stocker said Macy’s has had “success over the last couple of years” attracting a young customer and is expecting Park to continue to support that effort “from a main floor perspective.” The hope is that by luring them in on the first floor, the shopper will then visit one of the other six floors devoted to men’s wear in Herald Square.

“We were working on this for one and a half years and it was long overdue,” Stocker said. He said the learnings they will accumulate at Park will also be extended to other businesses in the future.

As far as bringing Park to other Macy’s units, Stocker said: “Our intent is to replicate a component in the flagships as we move through 2020.”

Like most other retailers, Macy’s has been making bold moves to remain relevant in a rapidly changing retail environment. Last May, the retailer bought Story, the 2,000-square-foot store on Manhattan’s West Side that changes its merchandise theme every four to eight weeks, and installed it on its mezzanine level. Rachel Shechtman, Story’s founder, was brought into Macy’s management as chief brand experience officer.

Stocker said that men’s wear has been doing well for Macy’s of late. “We’re happy with where we are from a men’s perspective,” he said. Men’s, together with kids, accounted for $5.7 billion of Macy’s Inc.’s $25 billion in sales in 2018.

In August, when releasing its second-quarter results, Jeff Gennette, chairman and chief executive officer, said men’s has been one of the strongest performing businesses so far this year and increasing as a percentage of total apparel sales.