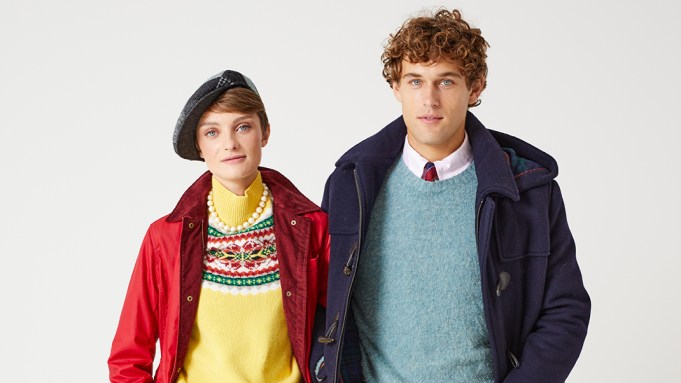 NEW YORK — Brooks Brothers changed hands about a year ago, and over the past 12 months, there have been a number of large-scale changes. In addition to the new owner, there’s a new chief executive officer and a new creative director.

Under the ownership of SPARC, a partnership between Authentic Brands Group and Simon Property Group, and the sharp eye of CEO Ken Ohashi, the 203-year-old business aims to return to a position of prominence after a shaky few years that ended with the company in bankruptcy court.

Key to its rebound hopes is product, which falls under the purvue of Michael Bastian, who was named to the top creative post following the completion of SPARC’s $325 million acquisition of Brooks Brothers last September. The designer, who started his career in retail at Abraham & Straus and served as men’s fashion director of Bergdorf Goodman before starting his own label, had a small impact on the spring collection, but it’s the fall line where his full influence is evident in both the men’s and women’s collections.

During an exclusive preview with WWD, Ohashi said he was “thrilled” with how the expansive collection came out, “and we just want to get it out there. He’s [Bastian] creating things that we all want to wear. He’s a very commercial designer and doesn’t overthink things. He won’t be the first to try something, but what he designs is very easy and fashionable.”

Ohashi and Bastian have a long history, one that dates back to when the designer was working on a special men’s collection with Gant around 2010. When Brooks Brothers joined the SPARC family, Ohashi knew just who to call.

“Even before we bought the brand, I knew Michael was the guy,” he said. “And once the acquisition was completed, we were off and running.”

Early on, the new Brooks Brothers team knew that its “north star” was to mine the company’s rich history but make it relevant for today. “We knew who we wanted to be and we rolled into it very quickly,” he said.

When it comes to the “creative process,” Bastian and the team “spent a lot of time looking back.” The fabrics, the silhouettes and the key pieces were all inspired by the brand’s archives. “You have to understand the foundation before you can reimagine a business.”

So it’s no surprise that the fall collection is chock-full of nods to Brooks Brothers’ heritage, including reinterpretations of the brand’s classic button-down oxfords, rugby shirts, trenchcoats and corduroy blazers. The original “fun shirt,” a color-blocked version of the oxford, is also making an appearance, along with an ascot shirt.

Rather than a focus on tailored clothing and dress shirts, however, the bulk of the assortment is centered around sportswear, a key push for the company going forward. Sportswear was 27 percent of sales at the time of the acquisition and will be close to 40 percent next year.

The fall collection is broken down into several stories, all of which work together. There’s a nostalgic take on back-to-school called Chestnut Hill with a focus on preppie classics such as the button-down shirt, cardigans and corduroy blazers, as well as a twin set with an archival print and a wrap dress with an equestrian print for women.

Horses are a common theme in the collection, inspired by Eadweard Muybridge’s photography of horses in motion. Among the pieces with an equestrian bent are sweaters with embroidered horse motifs, and camo horse prints on shirts and puffer coats.

For women, there are gaucho-style jeans, cropped bombers, an ultrasuede wrap dress, a polo coat, slouchy trousers and cardigans and silk dresses.

This season marks the first time the same designer has created both the men’s and women’s collections and they complement each other.

“I’m very happy with how it came together,” Bastian said. He pointed to a few of his favorite pieces including the “icons we brought back,” such as the classic oxford and Bengal-stripe shirts and the novelty sweaters.

While most of his experience has been in men’s, Bastian embraced the opportunity to “create a new identify” for the women’s line. “It has had a few different personalities over the years so we were happy to align it more with the men’s by using the same color cards and inspiration. They’re not married but they’re at least friends and going to the same party,” he said with a chuckle.

Women’s still represents under 20 percent of Brooks Brothers’ reported $700 million in sales, and Ohashi believes there’s a lot of runway to grow that category.

The fall collection also marks the absorption of the former Red Fleece younger-skewed collection into one “seamless” collection under the Brooks Brothers name.

Ohashi said new customer acquisition, with a target for a 30- to 45-year-old, is a goal for the business. “He’s shopping with us for a suit and shirt but not his sportswear.” Instead, he’s heading to Vineyard Vines, J. Crew and Vince, but Ohashi hopes to change that by highlighting the wide range of product offered at Brooks Brothers.

“We don’t think there’s one place for this guy to shop for his work, after-work and weekend life, so the key thing for us is to bang him over the head with sportswear and accelerate that.”

Brooks Brothers also hopes to catch the eye of potential customers with a romantic new marketing campaign, focused around digital, intended to evoke an emotional reaction and shine a spotlight on the rich sportswear offering. “We have such depth of character, but it was just a branding exercise.” In the past, the company had invested a lot in the back end, but under SPARC, this has been “flipped on its head,” Ohashi said.

While fall is the primary focus, Ohashi said the few spring and summer pieces that Bastian designed sold exceptionally well and also served to “lift the floors and bring excitement back into the business.” Among the bestsellers for the season have been knitwear and shorts, he said, which also reflect the new “sportswear-centric” bent of the business.

“Historically, we’ve been known as a dress shirt and suit business, but now we’re more of a lifestyle player,” the CEO said. That speaks to the new normal in wardrobing today when the “lines are blurred” between work and leisure attire. “Even if you’re wearing a suit three days a week, you’re casual Thursday and Friday.”

Overall, Ohashi said the business is doing well, especially in the past few months. “It was challenging in the beginning of the year,” he said, “but we’ve seen significant acceleration between April and now.”

The biggest challenge, he said, is the supply chain, which is being disrupted by both manufacturing and shipping delays and could impact the second half. But because inventories will be lean, most merchandise will sell at full price. “We don’t have the inventory to be promotional,” he said.

In addition to Brooks’ 70 full-price and 100 outlet stores, the company is going back into wholesale in a small way for fall with Nordstrom as the key partner in the department store channel, Ohashi said. “We think wholesale is an opportunity, but we’re being careful with it,” he said.

Summing it up, Ohashi believes the future is bright for Brooks Brothers. “The culture is really good and we have a great team. We’re a 200-year-old brand, but we’re a start-up again.”