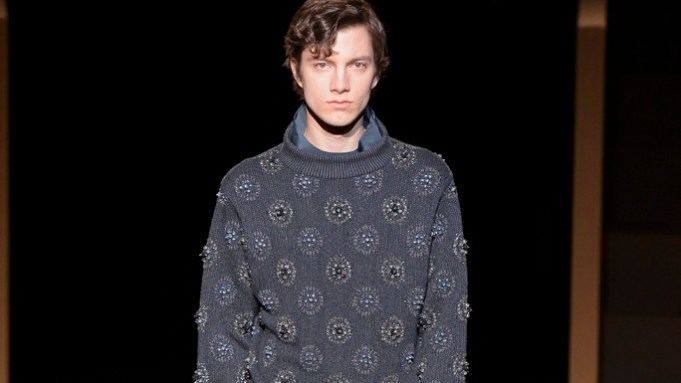 MILAN — References to the Seventies continued to dominate the men’s wear runways in Milan, with two contrasting trends standing out: romantic and military. Embellishments, whether embroideries or jewel details; astrological and space references; relaxed tailoring; checks and rich textures as well as strong outerwear, accented by fur, were all over the city. Retailers praised the ornate and luxurious collections, also channeling their budgets into the ever-growing accessories category.

The ongoing influence of Alessandro Michele at Gucci and his gender-blending “cannot be denied,” said Ken Downing, senior vice president and fashion director at Neiman Marcus, “with all of the sequins and beading, and his English gentleman with a rock-’n’-roll feel.” Downing said he was “loving the whole Seventies attitude — the Mick Jagger swagger.” Besides Gucci, Downing cited Brioni, Brunello Cucinelli and Etro as favorite collections.

Downing said his team “loved seeing all the English gentleman fabrics in Milan,” including check, tweed and herringbone patterns, in addition to pinstripes and chalk stripes.

Tom Kalenderian, executive vice president and general merchandise manager of men’s for Barneys New York, said Milan “had a strong comeback in the face of what has been a succession of powerful collections coming out of Paris. Dial back five, 10, 15 years, and Milan held the position as the capital of men’s designer fashion. Clearly the French collections have soared in acclaim as well as sales and profitability, but the Milan collections delivered highly creative collections packed with great iconic pieces.” He pointed to Prada, Gucci, Fendi, Brioni, Isaia, Ermenegildo Zegna and Tod’s as his favorites this season and said the strength of the collections would warrant an increase in his spending. “Great product is what drives energy and commerce, especially in times such as these.

“Davide Marello, the recently appointed creative director of Boglioli, delivered a beautiful and sophisticated collection in his first runway show,” he added. From the venue, a “chic Milanese private men’s club, surrounded by a blend of 19th- and 20th-century decorations, every detail perfectly mirrored the careful balance of this modern brand.” He also said Alessandro Michele’s Gucci “continues to deliver a surprising and rare view of this venerable luxury brand, with wit and enthusiasm that is driving clients into the stores.”

Tiziana Cardini, fashion director of Italian department store La Rinascente, said seeing men’s and women’s wear together on several runways in Milan triggered “a moment of reflection, which could have interesting and positive developments.” Cardini cited Prada and Gucci as standouts in a positive week. “Miuccia Prada was well-inspired. [She] pushed on the accelerator, adding a real injection of fashion, bringing forward a strong, innovative, original, even complex message, daring to address big issues, yet offering a desirable, appealing and artistic collection.”

Gucci is not merely transgender, but rather transseasonal, Cardini added, as the brand shows “a continuum of items that are beautiful and strong, each by itself, too, and this is a very modern way to dress.”

Cardini also highlighted Gucci’s and Michele’s Italian essence and style as he reinterprets Italian history. “It’s not vintage, it’s a stratification of the past that he reinterprets.” She also found Lucio Vanotti’s first collection “very interesting, he is already mature and in control,” and praised Tod’s, Fendi and Jil Sander.

Bruce Pask, men’s fashion director for Bergdorf Goodman, defined this as “a very satisfying season overall.” Pask gave a thumbs-up to “softer, graphic tweeds like herringbones and glen plaids [that] gave great surface interest and a rich feel to outerwear, suiting and tailored separates from collections like Prada, Etro and Brunello Cucinelli, who had a standout showing.” He pointed to Gucci and Ermenegildo Zegna for “opulent embroidery, beading and incredible surface interest.” Prada was deemed a “particularly terrific show,” for its take on naval attire, and he said he was “consistently intrigued by Gucci” and Michele’s “romantic, masterful mix of nostalgia and modernity.”

Outerwear was “especially strong with terrific belted coats” from Bottega Veneta, Brioni and Boglioli, he said. “Shorter shearlings and jackets with shearling collars and trim were strong pieces at Neil Barrett, Prada, and Brunello Cucinelli.”

“After seeing the collections in Milan, we are optimistic about what we will be able to offer our customers,” said David Witman, executive vice president and general merchandise manager of men’s wear at Nordstrom. “Brown and gray will be important in every category and the fusion of tailoring and sportswear continues to evolve. What stood out to us the most was the beautiful tailoring at Canali, the excitement in and around Gucci and Neil Barrett’s modernized vision of the Seventies.”

Damien Paul, head of men’s wear at Matchesfashion.com, said his favorite collections included Bottega Veneta, Gucci and Damir Doma. “It felt like a week of two halves — on one side, we saw a military-influenced, utilitarian aesthetic from the likes of Jil Sander and Versace, which produced some especially great outerwear. But there was also a softer, slightly off-kilter feeling in the air. I thought it looked most modern at Bottega and Gucci.” Paul, underscoring that men’s wear “continues to perform brilliantly” at the online store, where it’s one of its fastest-growing categories, added that “it’s always a strong Milan when we see the brands here zeroing in on what they do best — luxurious, grown-up fashion and killer accessories. I thought it was an energizing week.”

Monica Pascarella, senior men’s buyer at Luisa Via Roma, cited Gucci and Neil Barrett as her favorite collections, noting influences from the late Nineties into the Seventies trend.

“We are investing more and more in men’s wear, which is growing a lot. We are looking for high-quality, luxurious pieces,” she said, noting that accessories are growing faster than ready-to-wear.

Luke Mountain, buying manager at Selfridges, said “men continue to evolve in how they are dressing by combining multiple references including tailoring, street and military details.” Standouts were “great coats,” and, in terms of shows, Gucci, Canali and Boglioli.

“Suiting has a new form, with a far more relaxed approach. The silhouette is softer and looser, but new layering and pairings have emerged. This was prominent at Ermenegildo Zegna, who swapped tailored shirts for embellished sweaters, while Cucinelli maintained its luxury casual tailoring aesthetic, where the lines between formal and casual dressing are blurred,” said Jo Harris, general merchandising manager of men’s wear at Harrods.

She praised Gucci’s “continued creativity and eclecticism of the collection, which was full of ‘wow’ pieces rich in detail and a unique sense of color,” as well as Prada’s naval influence, which “created a handsome, moody yet incredibly desirable and wearable collection. With multiple layers, tailored suiting, oversize outerwear and multitextures, it was one of the best shows we have seen from Prada in recent seasons.” Harris also appreciated Ermenegildo Zegna “for presenting the unexpected with statement embellished, embroidered and jacquard layers. The collection moved away from typical suiting and explored a more relaxed, unique and experimental approach.”

Ichiro Matsui, general manager of Takashimaya, cited the “styling mix of relaxed and sporty” trends and voluminous outerwear. Matsui’s top collections were Fendi, Prada and Marni. Budgets for Milan were down for ready-to-wear but up for bags and sneakers, he said.

Hirofumi Kurino, cofounder and creative director of United Arrows, judged this Milan season a good one, because there was no single trend that stood out. “Each designer tried to make their own [collection] original, so it became diverse in a positive way,” he noted. Kurino named Prada as his favorite show and lauded Lucio Vanotti among the younger, less established designers. He said he would stock up on check coats, viewing them as the item with the most commercial appeal.

He named Gucci, Neil Barrett, Missoni, Etro and Ermenegildo Zegna among his top picks. He said budgets were “fairly consistent with last year.”

“There were no major surprises,” said Eric Jennings, vice president and men’s fashion director at Saks Fifth Avenue. “The Seventies were particularly big this season as seen in the palette, high waists, flared bottoms and long trenches. The most salable category for fall remains outerwear. It will have to be a statement piece, though, because nobody’s looking for just the keep-me-warm coat.”

Jennings cited the oversize bomber, shearlings and dramatic, voluminous numbers with embellishments among his preferred options. Top collections were Prada, Zegna, Fendi and Neil Barrett, while Cavalli and Isaia stood out for their original and fun-loving show concepts, he noted.

Steven Cook, senior vice president of buying and merchandising at Holt Renfrew, listed Prada, Gucci, Neil Barrett, Corneliani and Fendi as his favorites, as well as Lucio Vanotti as one to watch. Cook saw Milan as a “strong season with some new innovation, particularly in outerwear, shearlings, knitwear, lounge daywear and the continuing evolution of the pants silhouette to a more relaxed viewpoint.”

He said he was “confident” going into the buying season in Europe. “We are coming off a very strong, record-setting year at Holt Renfrew, particularly with our European vendors.” In terms of buying strategy this season, Cook noted that “the exchange rate is certainly top-of-mind,” as the retailer was “working through this with our vendor partners.”

Ahmet Ocal, buying director of the men’s merchandise group at Beymen, said, “The new androgynous aesthetic is still dominant in men’s fashion today. The new man is expected and eager to dress in a strong identity and statement. Designers are spending their effort to combine the top luxury, creativity and workmanship in a best possible way. The use of fur, exotic leathers, cashmere, silk and embellishments has reached a maximum [unprecedented] level.”

Ocal said the “percentage of allocated budget for designer brands has increased compared to last season, as Milan started to become more creative on the designer level. We see even sartorial brands seeking to act like designers.” Addressing the current situation in Beymen’s Turkey, Ocal said “frankly speaking, even though it’s been an unfortunate year for us in many ways, we still keep our hopes up for upcoming seasons. People are scared and pessimistic about the future. Our aim is to serve our customers with the best products and brands that may make them happy and satisfied.” Favorite collections include Bottega Veneta, Neil Barrett, Versace and Fendi. “Boglioli was the discovery of the season for us. Their first show was a totally new approach to sartorial wear.”