Nordstrom Brings Beams to the States

The retailer’s Concept 007 shop will feature merchandise curated by the Japanese company.

The Beams shop at the Nordstrom men's store.

Nordstrom is bringing Beams, the buzzy Tokyo store, to the States for the first time in a retail space this fall.

The Japanese company is the latest collaborator at the Nordstrom men’s store’s Concept pop-up project. Concept: 007 Beams will open to the public today and remain through the holiday season.

Sam Lobban, vice president of men’s fashion for Nordstrom, said the company is “always scouring the market for interesting and innovative ideas across the scope of men’s.”

Over the course of his career, which included a stint at Mr Porter, he visited Japan eight or nine times, he said, nearly always Tokyo, and had “developed a relationship with the team at Beams.”

So when brainstorming about what the newest iteration of the Concept project could be, Lobban immediately thought of Beams.

Lobban said he’s long been a fan of “the product they sell and the way they present their brand” as well as their distinctly Japanese take on Americana, which is wildly popular in that country.

“We wanted to give them the opportunity to show Americana through a Japanese lens and bring it back to America,” he said.

As a result, the shop will showcase an eclectic assortment of gifts, ranging from knitwear to sake sets. The shop will also carry all four of Beams’ private labels — Beams, Beams Japan, Beams+ and Beams T — along with a series of exclusive collaborations from Japanese and American brands.

And the shop will also include Beams’ distinct take on some well-known American brands including Polo Ralph Lauren, New Balance, New Era and Brooks Brothers.

That was executed in the reinterpretation of oversize looks from Polo first popular in the Nineties, as well as Los Angeles Dodgers and New York Yankees-branded sweatshirts from New Era, and Kurt Cobain-inspired pajamas from Brooks Brothers.

“As New Concepts evolves, each iteration has become decidedly different from the last,” Lobban said. “Beams is both innovative and evergreen, embodying trends while remaining classic. The breadth of that offering is something American customers have not experienced in-store. Bringing Beams to life for Nordstrom while collaborating with quintessentially American brands distinguishes Concept 007: Beams from everything that’s come before.” 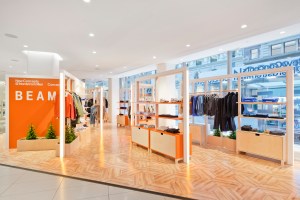 This is the first retail presence in the U.S. for the Japanese company.

Makoto Toda, Beams’ creative supervisor, said his company had been “looking for an opportunity to present Beams in the U.S.” for a while. “We knew Sam Lobban from his days at Mr Porter where he stocked Beams+ and greatly contributed to introducing our brand to the international audience. We were thrilled when we were tapped by Sam to be featured in the Concepts program, which gives us a rare chance to be in eight cities across North America, most of which are locations that our brands have never landed before. Because this is a special stage within Nordstrom, we are able to present Beams in a fuller capacity, in the true sense of who we are — a multibrand, multicategory retail curation.”

Toda said the products were selected “to offer a glimpse of the fashion interests of the modern Japanese man. Most are exclusive to our pop-up at Nordstrom if not shared exclusively with our Tokyo flagship. Private label categories selected for this project include Beams+, our Americana-inspired men’s label; Beams, the namesake men’s casual label offered outside of Asia for the first time; Beams T, the art T-shirt label and Beams Japan, that celebrates Japanese craft and design.”
On top of that, he said that because the company is known for its collaborations, it chose four U.S. brands to release on a limited-edition basis, “to achieve an appealing balance of familiarity and uniqueness.”
He added that “North America is a significant fashion market that is very different from our native market. Given a prime location during the holiday season, we look forward to see how shoppers react to our curation. In the cities where Beams has had no stockist in the past, we are very curious to know how the audience will react to Japanese brands and styles.”

Toda said this partnership is not necessarily intended to test the waters in the U.S. in hopes of one day opening a Beams store here, but it could open a conversation. “We are still only taking our first steps here, but we are hopeful that these steps will lead to bigger, longer-lasting opportunities,” he said.

In fact, Fred Segal Sunset in Los Angeles is opening a pop-up for the brand on Thursday, Nov. 14. That shop, which will feature a full window display of lanterns intended to mimic the aesthetic of the Beams flagship in Tokyo, will offer the Beams+, Beams Boy, Beams Couture and Mature private brands.

At Nordstrom, the Beams merchandise will be sold at the company’s men’s store on New York’s West Side as well as seven other units in the U.S. and Canada. It will remain in place through Jan. 5.

Lobban wouldn’t reveal what the next Concept shop will be, saying only, “There is definitely something coming next.”

He said the idea of offering limited-edition pop-ups has been successful for the company. “We’re really pleased with the Concepts’ performance,” he said. “This is just our first year so we’re learning a lot and still setting the tone of taking ideas across the whole breadth of men’s. But it’s resonating with our existing customer and attracting new ones.”