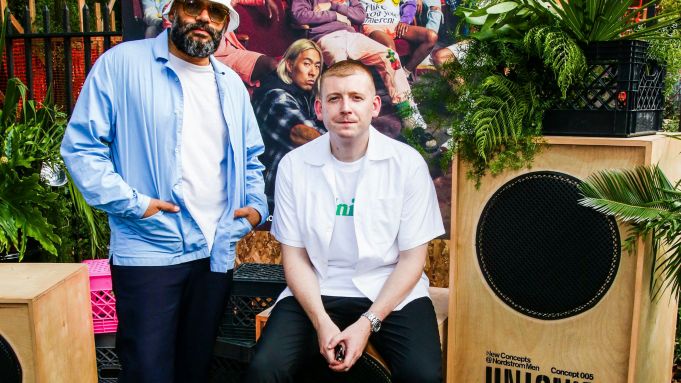 Sam Lobban wasn’t about to host just another in-store event for the launch of Nordstrom’s latest pop-up men’s concept shop. Instead, the retailer’s vice president of men’s fashion threw a high-energy block party at the Hester Street Market on the Lower East Side to introduce Concept 005: Union & Company, complete with food, drinks, live music and fun takeaways.

“We’ve been to enough boring cocktail parties,” said Chris Gibbs, owner of Union, the buzzy Los Angeles-based specialty store. “We wanted to create something we would actually go to.”

The event was properly named a block party. The vibe was a neighborhood cookout, with food provided by Jamaican restaurant Miss Lily’s. The only thing missing was an open fire hydrant for children to run around, but the young attendees found fun and games at a ping-pong table instead.

A newsstand near the entrance carried fashion magazines, gave out free candy, and scratch-off tickets for a chance to win a free T-shirt. Games such as dominoes and chess were stationed on picnic tables and wooden speakers were in the rear where Stretch and Bobbito provided tunes for the party.

“Doing outdoor parties in New York, there’s such a rich history of that from the park jams in the Seventies, which I think for most people that aren’t old enough to have been there is something that exists in lore,” said Stretch, whose real name is Adrian Bartos.

Bobbito, real name Robert Garcia, added, “I lived in the Lower East Side for 14 years and Stretch and I were actually roommates in our heyday in the Nineties. For both of us, this neighborhood has a lot of charm. To be outdoors and see our people, we have family out here, old-timers, skaters, playground legends out here, the whole fashion crowd, it’s a nice mix.”

Lobban said the unconventional location was also an “extension of what the concept is and our way of celebrating what we’re trying to do.”

“It’s a merge of Union and a merge of Rhude,” said designer Rhuigi Villaseñor about his offering for the collection. “Nordstrom has always had a strong community — probably one of the best in the world, so it’s a merging of our creativity and our commercial power.”

The Concept 005 selection is also being offered in eight stores with this edition. When Lobban, a former buying manager for Mr Porter, joined Nordstrom last June, he instituted a rotating pop-up shop program for the retailer’s first stand-alone men’s store in Columbus Circle in New York City. Concept 001, which centered around cold-weather merchandise, was carried in only that store and the Seattle flagship. But the success of the concept has prompted the store to expand its reach.

Concept 005 will be carried in New York, the Seattle flagship, The Grove in Los Angeles, Pacific Centre in Vancouver, Michigan Avenue in Chicago, NorthPark Center in Dallas and Aventura Mall in Miami and South Coast Plaza in Costa Mesa, Calif.

He said Nordstrom’s other stores have “petitioned” him to get in on the action. Even so, Lobban said there are “no plans to expand the number beyond eight” at this point, although the merchandise is also available online.

From his perspective, Gibbs said that as a “tried and true independent store,” this is the first time he’s worked with “a big corporate company” like Nordstrom on a collaboration. “But it’s been pretty smooth.” The only thing that threw him, he said, were the “shipping logistics. What’s freight on board?” he asked with a laugh.

He said all of the brands chosen for the collaboration are also carried at Union except for Cactus Plant Flea Market, and were selected to “build a well-rounded offering of our view of men’s wear.”

Lobban said he is especially proud of the fact that the price points are democratic, ranging from $42 to $1,295. “This shows the importance of independent retailers,” he said. “Their viewpoint and ability to edit and convey the message to the customer is so special,” he said. “If it’s done really well, the store becomes its own brand.”

The men said that if sales are as successful as they’re expecting, their relationship may expand beyond this one temporary concept. “There’s no reason for us not to work together again,” Lobban said. “It’s been a really good experience,” Gibbs added, “and we’re not expecting it to go south from here.”