The company is actively looking to open additional units for the more affordable, made-to-measure concept.

For the first time in its history, Paul Stuart is opening a second store in its hometown of New York City.

As reported last year, Paul Stuart introduced CustomLab as a weapon against the proliferation of low-cost, made-to-measure men’s wear from Indochino, Suitsupply, Knot Standard and others. It also allows the company to tap into the large fleet of on-site tailors at its Madison Avenue flagship.

Paulette Garafalo, chief executive officer of Paul Stuart, said that before the pandemic hit, CustomLab offerings at the company’s Madison Avenue flagship on 45th Street had been “on fire.”

She said the move to open a dedicated shop for CustomLab had started before the lockdown and although the opening was pushed from early spring to Sept. 1, Garafalo said there was never a thought not to move ahead with it.

“I’ve heard the same story for years,” she said about the demise of the men’s suit business. “But I believe there’s pent-up demand. There are a lot of people who still want to celebrate and have weddings and bar mitzvahs. It’s our natural instinct to gather together and enjoy.”

And while business continues to be challenging, there are signs of hope, she said. “We have to come back to life,” she said. “I’m not so much doom and gloom. We’re moving closer every day to last year’s numbers. Up until March, we were double digits ahead every month and August was good. So we don’t want to put the brakes on our Paul Stuart lives. We believe that it will be slow, but we’ll get there.”

Since CustomLab was introduced at Madison Avenue, it has attracted an older customer who was looking for a more affordable, made-to-measure option with Paul Stuart’s distinct aesthetic. But Garafalo expects to attract a younger customer to the SoHo store.

While many competitors offer made-to-measure suits for $400 or less, CustomLab prices for a suit start at $995 with a three- to four-week turnaround. Also available are sport coats starting at $695 and shirts at $195. 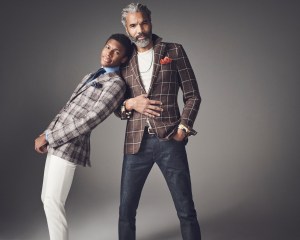 An image from the CustomLab ad campaign.

Garafalo acknowledged that CustomLab is more expensive than its competitors, but stressed that it offers “curated fabrics” from Paul Stuart’s creative director, as well as “our merchandising and a different level of quality.” And it is supported by the team of highly skilled tailors who are on staff.

Although Paul Stuart has operated branch stores in Chicago and Washington, D.C., for many years, this is its first expansion in the New York City area. In July, Paul Stuart opened a 1,900-square-foot pop-up at 50 Main Street in Southampton that carries men’s and women’s apparel and accessories. That store will remain open through Dec. 31.

Garafalo said business there has been “fantastic. We have our loyal customer and we’re also attracting new customers,” she said, noting that Europeans and others who opted to summer in the Hamptons have discovered the brand. Top sellers there include sportswear and footwear, although the store carries a full assortment of Paul Stuart product.

Garafalo said that the new CustomLab store will not be the only new Paul Stuart store to join the fleet. She said she is “actively looking for another location in the New York metropolitan area,” including Brooklyn, Long Island and New Jersey.” And the mix would be similar: 80 percent made-to-measure that would utilize the tailor shop, along with 20 percent ready-to-wear.

The new store opening will be supported by a new digital advertising campaign that will appear on newsstands in New York as well as on social media platforms.