President George W. Bush Named a Father of the Year

The former commander in chief joined Morris Goldfarb of G-III apparel at a luncheon in New York. 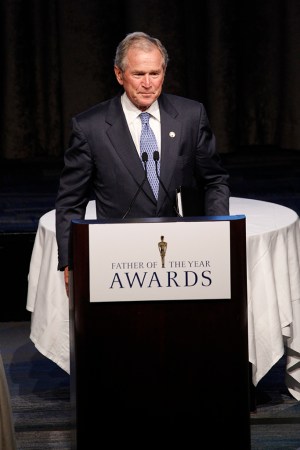 That was the strategy of the National Father’s Day Council when it selected former President George W. Bush as one of its fathers of the year for 2015. But the former president, looking out over the jam-packed ballroom at the New York Hilton, joked that “this place would be empty if Morris weren’t the honoree.”

Bush shared the honor with Morris Goldfarb, chief executive officer of G-III Apparel Group. Whether for Goldfarb or Bush, the luncheon raised a record $1.3 million, with proceeds benefiting Save the Children’s U.S. Programs.

Having a former president in attendance also resulted in some changes this year. Not surprisingly, security was tight, with every attendee having to be vetted before being allowed to enter. A special VIP reception for the dais executives was off-limits to the rest of the crowd. The VIPs were sequestered in a back room where they lined up in advance for the opportunity to have their picture taken with Bush before he addressed the rest of the gathering during the lunch.

According to one retailer, “He was super-personable and friendly.”

He acted the same way on the podium, where he and Save the Children Action Network president Mark Shriver joked and laughed good-heartedly during the lunch.

Shriver thanked the president for a dinner he hosted at the White House for his mother, Eunice, right before she died, adding: “There’s a Bush-Shriver love fest going on here.”

The president’s award was presented by his daughter Barbara, who struggled to hold back tears as she spoke about growing up a Bush. She said he did his best to make sure she and her twin sister had a normal childhood. “I grew up thinking everyone’s grandfather was president,” she said. She recalled nights the three of them would take “adventurous hikes” around an alligator-infested lake in Texas and through the years, no matter the outside pressures, “he was always present, always there. He was the cutest dad and we lovingly called him ‘Popsicle,’” she said.

Bush said becoming a father was a life-changing experience for him and once the girls were born, he stopped drinking and has been sober since 1986. “Fatherhood meant sobriety,” he said.

He then read an excerpt from his book: “41: A Portrait of My Father.” He told the tale of how George H.W. Bush nearly died after being hospitalized with pneumonia, but survived. For his 90th birthday, he wanted to do a parachute jump, although he was in a wheelchair. But considering that his first parachute jump was after being shot down over the Pacific in 1944 — and he’d done the same thing for his 75th, 80th and 85th birthdays — he wasn’t going to be stopped.

Despite his frailty and a brisk wind that resulted in a “face plant” after he landed on the ground, the older president completed the jump.

Bush said his father was also there for him in spring 2013 when his presidential library opened at Southern Methodist University in Dallas. “Great pleasure to be here to honor our son, our oldest son,” he recalled his father saying to the crowd. “This is a very special day for Barbara and me. We’re glad to be here. God bless America, and thank you very much.” Then he turned to his son and asked, “Too long?” Bush responded: “Perfect, Dad.”

Goldfarb’s children, Laura and Jeff, were also in attendance to present the award to their father. In his acceptance speech, Goldfarb joked that he’d been asked to be a father of the year five years earlier, but his kids were so dumbfounded by him being singled out that he declined. He said he spent the next five years trying to up the ante as a father and grandfather and gave his wife an “obscene” amount of money to spend on his kids and grandkids.

He then felt worthy of the honor.

The lunch also honored David Gonzalez, the Ashok Sani “All-Star Dad.” He was chosen after his daughter Marissa was selected by GQ magazine as the winner of an essay contest. Marissa read her essay to the crowd, saying that she’d met her father at the age of three when he started dating her mother. “He took and accepted me as his own,” she said, adding that he taught her “unconditional love” despite the fact that she wasn’t his biological daughter. “He never made me feel like I didn’t fit in,” she said, and instead made her feel like a “blessing instead of a burden.”

“I didn’t remember I wasn’t your biological dad until I read this essay,” Gonzalez said. He added that although he plays many roles in his life, “being a father and a husband is the most meaningful.”