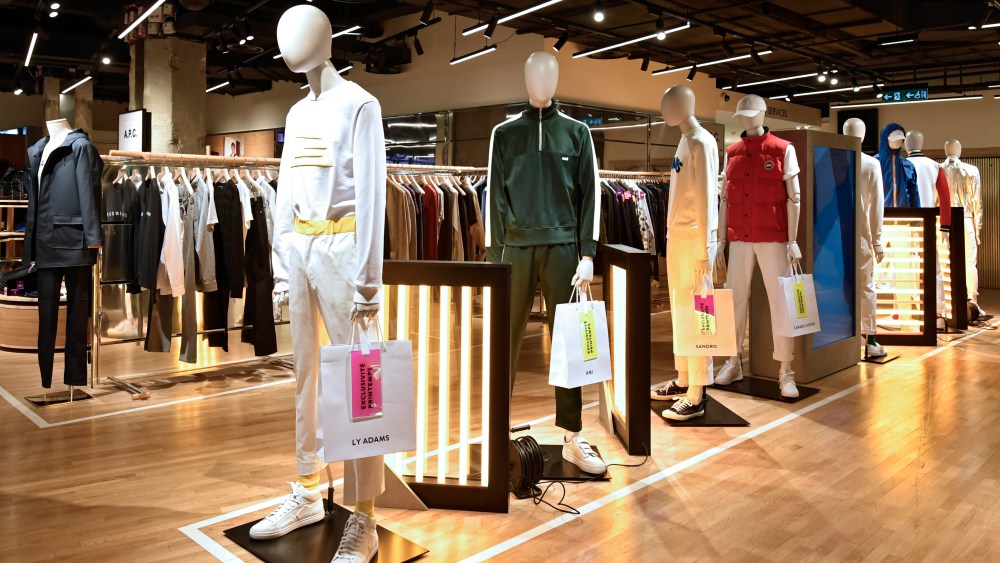 PARIS — Printemps on Monday unveiled a radical makeover of its flagship here with the opening of a five-floor men’s department at its historic building at 64 Boulevard Haussmann.

The redesigned Printemps de l’Homme store marks the first phase in the renovation of around half the store’s surface, or 237,000 square feet, over the space of six months, with the planned transfer of the homewares and beauty departments in May and July, respectively.

In addition, the retailer plans to enter the food category with the opening in 2018 of a three-floor department atop the new men’s store, in addition to a rooftop terrace affording 360-degree views of Paris, Printemps chief executive officer Paolo de Cesare said in an exclusive interview.

Printemps spent around 300 million euros, or $410 million at average exchange, on store upgrades between 2008 and 2013 and expects to invest a similar amount in the five years through 2019.

That includes 60 million euros, or $64 million, for the men’s store, which has gained 40 percent more space in the move.

It’s part of a plan set in motion following the acquisition of the store in 2013 by Divine Investments SA, a Luxembourg-based investment fund backed by Sheikh Hamad bin Khalifa Al Thani, the former emir of Qatar, whose other properties include London department store Harrods and Italian fashion label Valentino.

“We really started brainstorming on how we could make Printemps one of the most iconic department stores in the world. We said we needed to bring a level of innovation that has never been done before,” de Cesare said. “What you see today is the first major step toward this renovation.”

This weekend, some 250,000 men’s products were transferred from the annex Printemps building on Rue de Provence that had been home to men’s since 1922.

The new men’s store will occupy around 118,400 square feet once it is completed, with the addition in March 2018 of an accessories space on the ground floor, which still houses the main beauty hall.

“We really felt confident that it was time to create a new offer for men and move from a very kind of passive, old-fashioned, almost apologetic way of selling men’s to something that was more positive, more in-front, more energetic,” de Cesare said.

Printemps is slowly returning to growth after a year marked by the aftermath of the series of terrorist attacks in France and elsewhere in Europe. Its sales grew 1 percent to around 1.7 billion euros, or $1.88 billion, in the fiscal year ending March 31, 2016. It had projected growth of 8 to 9 percent before a series of coordinated attacks hit Paris on Nov. 13, 2015.

Between April and November 2016, sales were down between 10 and 15 percent a month, but business has picked up since November and the retailer posted record sales during the holiday period, de Cesare reported. Nonetheless, he expects Printemps to post a sales drop for the 2016-17 fiscal year.

“We will be very probably losing a few points, but we have been able to significantly readdress the business in these last months, which gives us hope for 2017,” he said. “We have seen so much volatility in this last year that it makes it very, very unpredictable where the business is going.”

Ready-to-wear accounts for 30 percent of sales, with women’s representing 55 percent of that total and men’s 45 percent. De Cesare expects the men’s business to grow by at least 30 percent in the two years following the completion of the new Printemps de l’Homme.

The store boasts some 250 brands, of which a third are exclusive and a third are new to the store. Novelties include a men’s personal shopping salon, a denim made-to-measure and customization bar by Levi’s, and the first physical store of lifestyle magazine The Good Life.

With today’s male shopper seeking clear layouts, service and efficiency, the priority was to create distinct “style destinations” for each floor, said Karen Vernet, Printemps’ general merchandise manager of men’s apparel, homewares and private label, during a preview of the new building.

“The men’s category is extremely dynamic. We wanted to make a real statement and capture a new fashion energy,” she said.

Printemps moved 12 escalators from the side of the building to the center to make the space easier to navigate. It recruited three architecture firms to oversee the building’s redesign, though a harmonious zen-contemporary mood unites the floors that are airy and intimate.

Wood and polished concrete figure among the principal materials, with light coming from a mix of natural daylight from the windows giving onto the street, overhead white LED panels and white neon accents, a symbol of energy. Digital screens throughout the store project moving and static images.

French architect Jean-Michel Wilmotte designed the first floor, dedicated to designer and luxury rtw, and created the concept of the accessories floor. London’s Universal Design Studio is behind the second and fourth floors, which carry urban and formalwear and casual fashion, respectively.

The third and fifth floors, covering advanced contemporary, denim and footwear, were designed by the Parisian collective Cigüe, which has developed stores for brands including Aesop and Isabel Marant.

American-Canadian architects Yabu Pushelberg designed the connecting feature in the store’s central atrium, “The Sail,” a contemporary nod to Printemps’ famous stained-glass cupola. The curved white aluminum panels are dotted with abstract petal-shaped windows in dichroic filters that change color with the light.

All of the floors share the same layout structure, with corners lining the peripheries and multibrand spaces in the center. New corners at the store include Canada Goose and Diesel Black Gold.

The floors also each boast special concepts. The designer and luxury rtw space hosts L’Endroit, an area grouping avant-garde players, the majority of which are exclusive to the store, including Damir Doma, Hood by Air, Jil Sander, Christopher Raeburn and Kolor.

The first floor is also home to Le Salon, a sprawling by-appointment personal-shopper lounge with warm wood flooring. “Men in general like to be accompanied when it comes to pulling looks together,” said Vernet, adding that the retailer plans to hold wine tastings and other events in the space.

Lanvin is the first brand to present a pop-up concept in Le Salon, geared to its “grande mesure” service, where customers can order hand-finished bespoke suits by the house. The space also boasts spacious changing rooms and a private entrance leading to the back of the store.

The urban and formalwear floor aims to present a new vision of businesswear, with clothing organized by categories, such as Trouser and Shirt sections, and a corner by Parisian made-to-measure suit specialist Rives due to open in July. Brands present include Z Zegna, Calvin Klein and Hugo Boss, as well as Printemps’ private-label brand, Brummell.

The advanced contemporary floor boasts a denim bar stocked with premium brands including Acne Studios, as well as a handful of niche Japanese denim labels like Momotaro Jeans and Japan Blue Jeans. Next to it is a made-to-measure Levi’s space, marking a worldwide department store exclusive, as well as an adjacent Levi’s Tailor Shop where clients can have their jeans customized.

The floor also boasts The Good Concept Store, the physical incarnation of The Good Life’s e-commerce site, offering everything from books to bikes to fridges. It marks one of several online-to-off-line initiatives in the new men’s building, which also include a pop-up shop by French blog Bonne Gueule.

Shoppers arriving on the fourth floor are greeted by a seasonal zone dubbed The Big Chill and dedicated to outerwear, which will switch to swimwear for summer. The floor also features an underwear section and a multibrand space dedicated to emerging brands dubbed La Sélection 64.

The footwear space on the fifth floor boasts a curved wooden track inspired by a velodrome, offset by minimalist merchandising units in black steel, raw aluminum and solid oak, as well a shoe repair space.

To mark the opening, Printemps has dedicated 11 store windows to men’s wear. Partner brands including Dior Homme, Balenciaga, Prada and Gucci have created about 140 exclusive designs based around the theme of a white base with accents in one of four primary colors: blue, red, yellow and green.

The project marks the latest effort by Paris department stores to grow the bubbling category. Le Bon Marché opened a new men’s floor in its basement in 2014, while BHV Marais — part of Galeries Lafayette Group — has revamped its men’s building while developing a constellation of men’s wear boutiques in the surrounding Marais district.

“Paris is way ahead of the other countries, because when I travel to Milan, to Berlin, to London, to New York, I really don’t see the same level of attention to men,” said de Cesare, though he insisted none of the other projects were comparable in scale. “Paris and Printemps set the trend in the market and retail, so I’m sure this will be noticed and interpreted by other retailers.”