By Jean E. Palmieri and Obi Anyanwu and Luis Campuzano on January 23, 2020

A beefy cardigan from Johnstons of Elgin.

It’s no secret that department stores are having a tough time of it as online retailers continue to chisel away at their business. In 2019, sales in that channel dropped 5.5 percent, according to the Census Bureau, on top of a 1.2 percent decline in 2018.

The climate for independent specialty stores is not much better, but those who have managed to survive up to this point have figured out a formula for success. It revolves around offering personal service and innovative product to update and modernize men’s wardrobes. Because most specialty merchants also count tailored clothing as the traditional strength of their business, the shift away from streetwear and back to a more dressed-up aesthetic is also lifting their spirits — and their sales.

As a result, stores shopping the New York men’s market this week were buying suits, sport coats and outerwear with technical properties such as stretch and stain-resistance as well as sweaters and shirts that provided comfort but still looked professional.

“The only thing we have to compete with is service and the personal touch,” said Ted Silver, owner of Weiss & Goldring in Alexandria, La. That translates into a “mixture of dress with casual” looks, he said. He especially liked Zanella’s new active pants and Scott Barber’s quarter-zip performance sweater as well as the lightweight, high-tech outerwear options he found for fall.

Ditto for Ken Giddon, president of Rothmans in New York City. Although January sales have been challenging and promotional — nothing new there — he said the cold weather has boosted sales of outerwear and accessories and the early spring deliveries that have already arrived are also garnering attention.

Kent Gushner, president of Boyds in Philadelphia, said sales in January are running up 3 percent overall with women’s wear, which the store is spotlighting more now, up 16 percent. In men’s, sportswear is the bright spot and he was walking the shows to find items from current and new vendors to update the assortment for both dress and casual options.

Here, brands that retailers discovered at the Project and MAN shows.

Backstory: Since its founding in 1968, the Milan-based brand has built a reputation for its under-the-radar manufacturing of high-quality tailored garments for some of the industry’s biggest names. “We’re the most famous hidden brand from Milan,” said sales director Luciano Moresco of the company, whose parent is Saintandrews SpA. Since 2006 it has been owned by Trabaldo Togna Group, a mill famous for its fine stretch fabrics. While private label manufacturing remains the bulk of the business, the brand has recently begun selling its own range under the Sant’Andrea name. 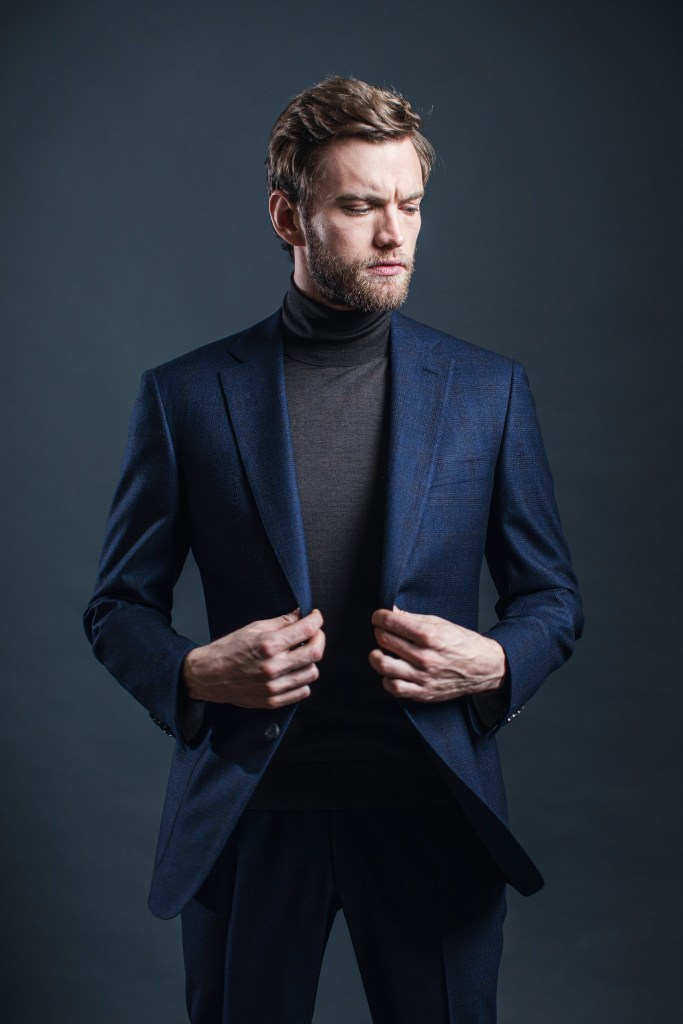 Sant’Andrea has created luxury suits for over 50 years.

Key styles: While tailored clothing remains the core of its business, Sant’Andrea also offers outerwear, knitwear and shirts in a variety of options. For the fall season, the collection is centered around pieces that blend business and leisurewear in a palette that includes winter beige and deep brown as well as sapphire to midnight blue, ultraviolet, green and bronze. Fabrics in the suits and sport coats are offered in Trabaldo Togna’s proprietary Estrato stretch wool and cashmere cloths, as well as wool-silk blends. Bold prints and colorful jacquards abound in the tailored offering and the outerwear includes field jackets, parkas and traditional overcoats. Standout styles include a five-ply, split-collar cashmere sweater and an unlined, seamless double-faced wool peacoat.

Backstory: In 2014, two friends from the U.K., Robin Bennett and Robin Winch, were frustrated by the lack of quality, style and functionality they saw in the bag market. So they set out to do something about it. The result is Bennett Winch, a collection of upscale leather and canvas bags that are handcrafted in England. The company, which uses an illustration of two robins as its logo, got its start creating what Bennett described as “the ultimate holdall,” a Weekender whose design they initially scribbled on a napkin. It was offered in 24-ounce canvas, was waterproof with leather handles and base, multiple interior pockets and compartments, brass hardware and cotton webbing. The success of that bag spawned a variety of complementary products including totes, briefcases and a range of small leather goods. 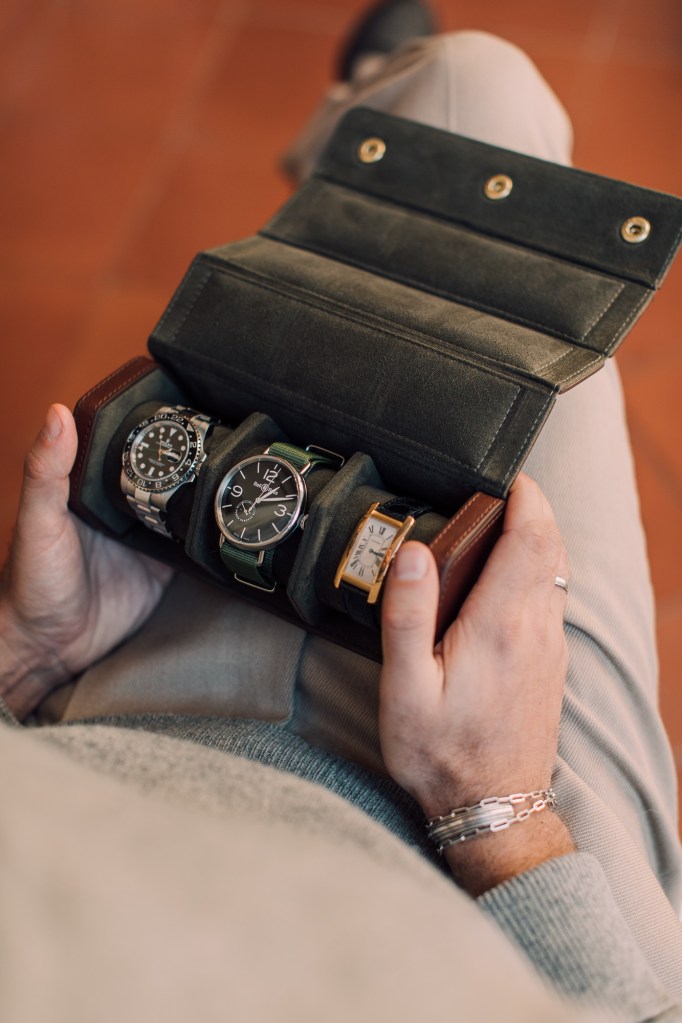 The watch roll from Bennett Winch.

Key styles: In addition to the Weekender, which is also available in leather now, its best-selling bag is the S.C. Holdall, a two-piece design that features a bag and a suit carrier in one. The clothing is placed in a garment bag that then wraps around the cylindrical bag and is secured with magnets and straps. Additions for the season-less collection include a watch roll, a circular piece that can hold three watches in its padded interior. It’s waterproof, features a Kevlar lining and has brass poppers. Other new items include a leather dopp kit with a wide-mouth opening and separate removable razor or beard clipper bag, and a folio lined in suede with a space for a laptop and a reverse popper fastening.

Backstory: The Scottish heritage brand can trace its history to 1797 and is the second oldest family-owned business in the country. Remarkably, members of the founding family are still involved in the business, which was started as a mill by Alexander Johnston on the banks of the River Lossie. Within a few years, the company became known for its estate tweeds, which were popularized by Queen Victoria and Prince Albert, and are still being produced today at the company’s mills in Elgin. Exotic fibers such as cashmere were added to the business in the 1850s and still represent a significant percentage of sales today. 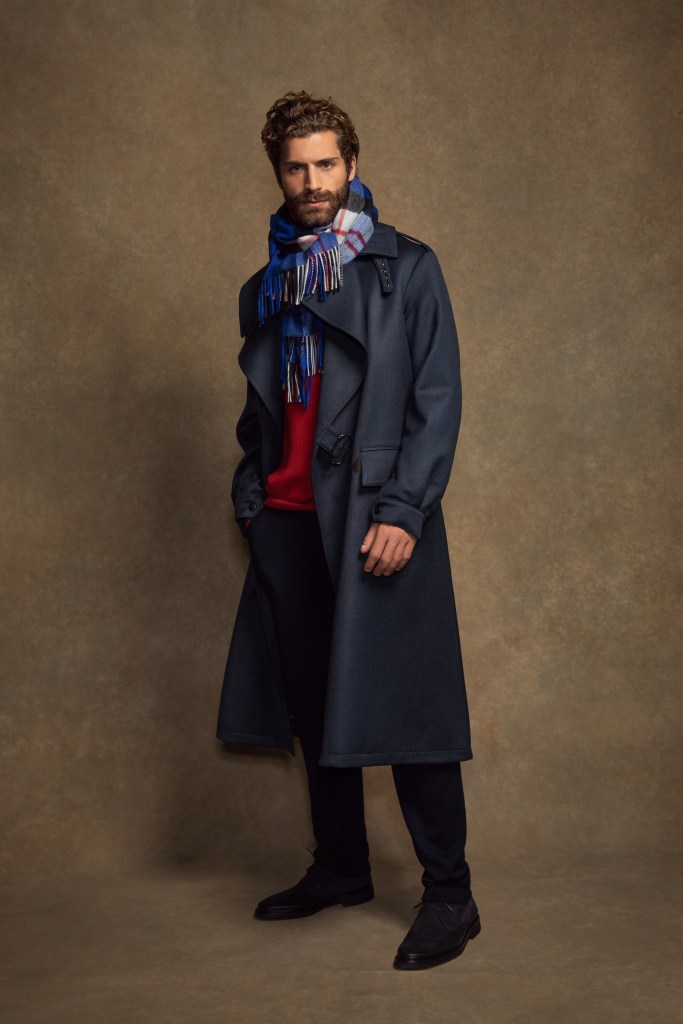 A look from Johnstons of Elgin.

Key styles: Under the tutelage of creative director Alan Scott, Johnstons of Elgin has created an assortment of outerwear and knitwear including a double-face, deconstructed cashmere coat that it pairs with a colorful scarf, as well as a close-to-the-body cashmere bomber. The fall collection, which was inspired by Mongolia and Peru in addition to Scotland, also features tailored pieces in merino wool and cashmere including a classic Chesterfield coat in a bold plaid and a military-inspired, belted wool trench coat. Other items in the assortment are reversible cashmere sweaters, beefy cardigans, lightweight merino sweaters, a range of cashmere loungewear and a fleece sweatshirt. 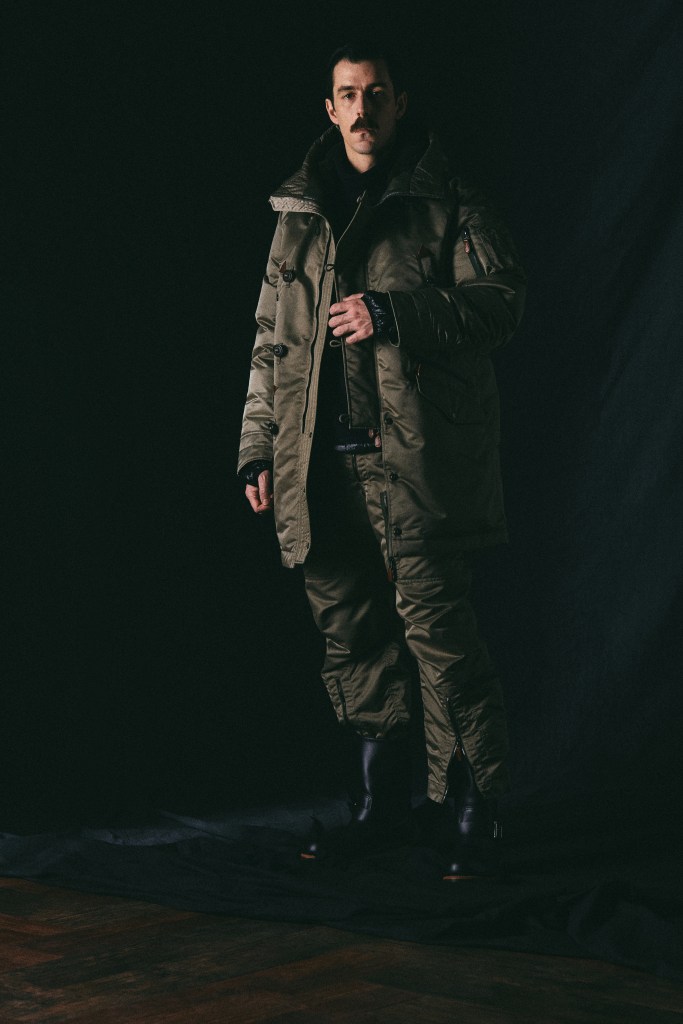 Backstory: Eastlogue, the Seoul, South Korea-based label founded by Dongki Lee, draws inspiration from traditional sports such as fishing and climbing, and reinterprets and updates vintage pieces, workwear and military uniforms. In its close to 10 years in business, Eastlogue delivered collaborations with New Balance twice in South Korea and is partnering with Reebok in March. The label is available in 50 global stores, including Beaker and Sculp in Seoul; Extra Butter and Hatchet Outdoor Supply Co. in New York City; Alpha Shadows in London, and Meadow in Malmö, Sweden.

Key styles: The label’s 19th collection is a continuation of vintage, workwear and sportswear reinterpretations, consisting of long-sleeve Henleys and goose down-filled parkas with leather sleeves and closure details, a signature for the brand. Accessories such as lamb’s wool hats and gloves sit at the low end of the brand’s offering, and pair with an assortment of down parkas, including a white style with military-inspired chest pockets, a navy nylon bomber with similar pockets, fleece and nylon jacket with olive and violet tie-dye techniques, nylon pants reminiscent of traditional MA-1 bomber jackets, plaid shirts, suits with multiple pockets and hoodies with two front pockets. Lee also developed a range of basic hoodies, button-down shirts and slim cargo pants for the Eastlogue Permanent line that was first introduced in spring 2020.

Backstory: Italian designer Maurizio Tedeschi founded Corelate in 2016 after stints in fashion sales and production and working for another label, which increased his desire to express his ideas through his own brand. The name derives from the combination of different fabrics and aesthetics, especially simple Scandinavian style with sartorial, Italian references. Tedeschi is also a champion of Italian production, working with factories across the country for categories such as knitwear. The Bologna-based brand is available in a number of stores in Italy, including Oluxury in Parma and Gisa in Ancona, as well as Blu in Lugano, Switzerland, The Parliament in the Los Angeles and Urban Outfitters in Canada. 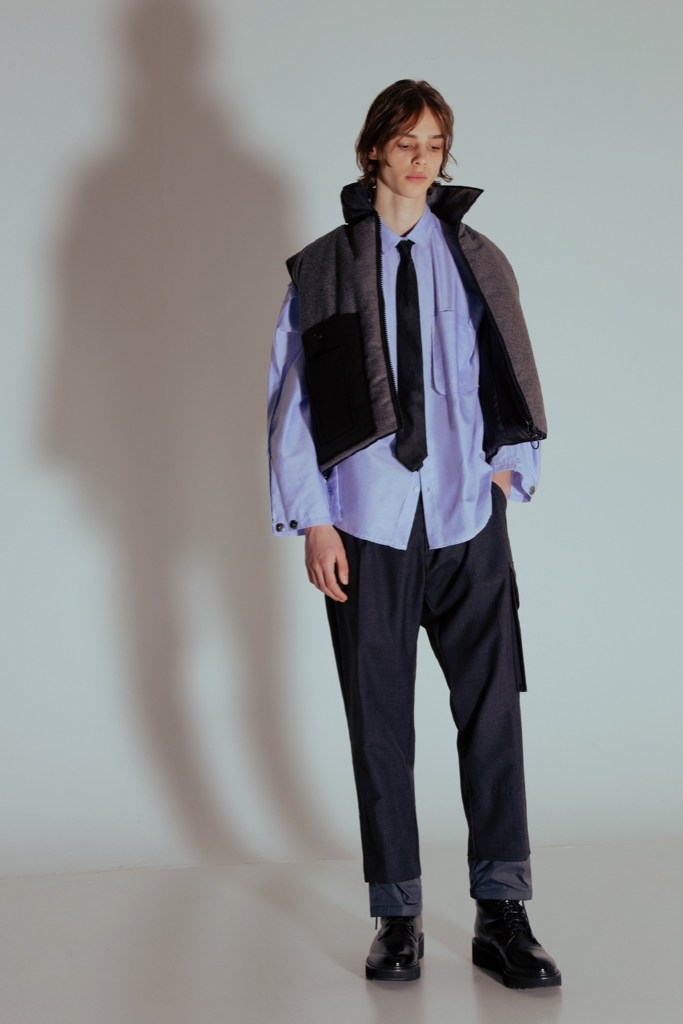 Backstory: The New York City-based label by Parsons School of Design graduate and Michael Kors alum Jimin Kim and cofounder Simon Lee is made for the on-the-go traveler who wants to commute seamlessly from a flight to a meeting without having to change. The name Dear Miler is a reference to the “million miler,” or someone who is always traveling. Kim produces the collection in South Korea and also sources the fabrics, which include Supima cotton that she uses for T-shirts, in that country as well. The brand’s headquarters is located in TriBeCa, and they are currently developing a 5,000-square-foot physical location that will serve as a retail store and office.

Key styles: The label’s third collection is centered around elevated comfort for the weekend, which is evident in fleece outerwear pieces in navy and cream and lightweight outerwear such as a peacoat crafted with Japanese fabric with a padded interior. Additional pieces include lightweight flannel shirts, button-down shirts with color-blocked flannel chest detail, T-shirts with reinforced shoulders and pocket detail, a tan shirt jacket and a wrinkle-free suit in polyester, rayon and polyurethane fabrics. In addition, most pieces feature multiple hidden pockets for stashing wallets, passports and plane tickets. 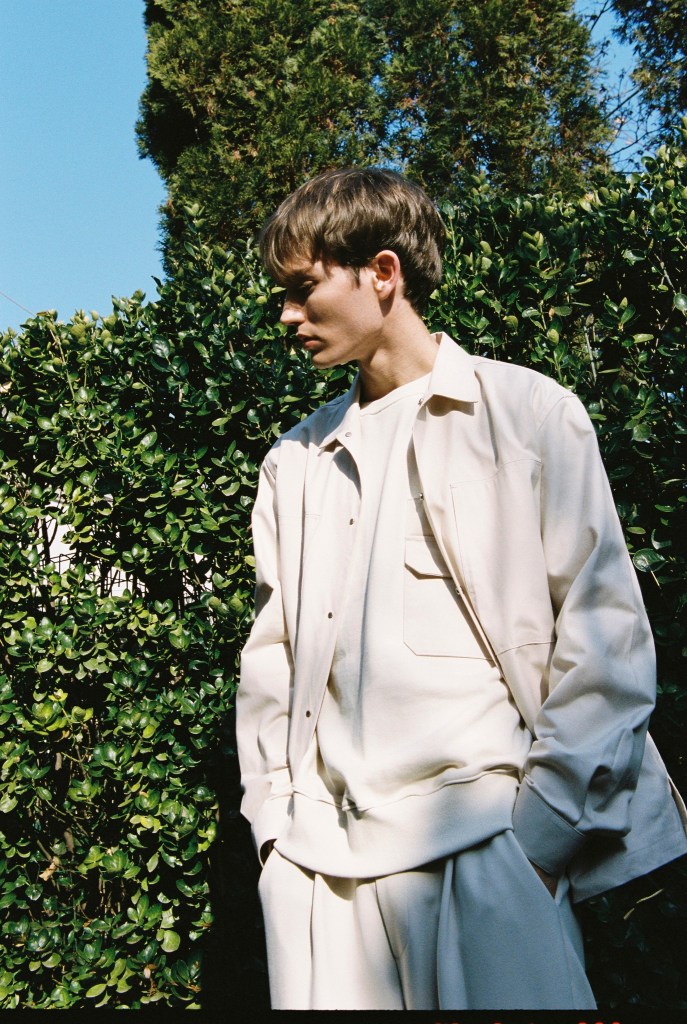