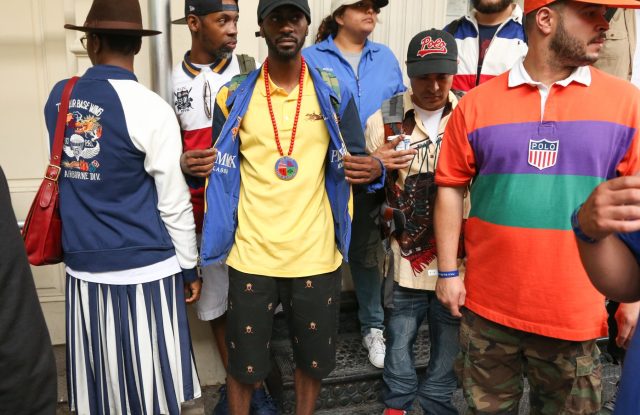 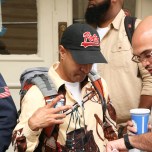 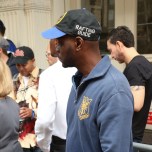 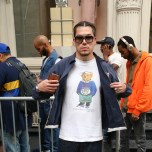 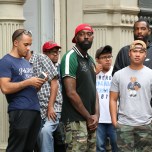 The scene outside Ralph Lauren’s Prince Street store in Manhattan’s SoHo last Thursday was reminiscent of the crowds that routinely occupy particular blocks in New York awaiting the release of a sneaker or a hyped streetwear collection. But there were some differences. These customers were decidedly older and camera-shy — one evaded WWD’s photographer stating, “I’m supposed to be at work.” They were also wholly devoted to Ralph Lauren and many of them wore full looks from the designer, which they’ve been purchasing since they were teens.

After months of rumors surrounding the re-release of the Polo Stadium collection, one of Lauren’s most admired lines, the company finally confirmed on its Instagram account that it would be reissuing a limited-edition capsule of old and new styles to commemorate the 25th anniversary of the assortment. The line was first launched in 1992 and drew from the Olympic Summer Games. The capsule featured 12 styles including a popover, which retails for $195; a marsh coat, which retails for $495; a fitted cap, $50, and a polo that sells for $125.

Customers were instructed to show up at select Ralph Lauren locations on Sept. 19 to get a numbered wrist band that would allow them to purchase one piece from the collection — by Thursday the brand felt more generous and let shoppers select two items. The company declined to comment.

“I was very surprised,” said Leonard Singamenggala, who was standing in line, when asked about the re-release. “But I’m actually really happy. I’m fairly new to the game compared to these other people who have been here since the Eighties. I only started collecting 15 years ago.”

A little further behind Singamenggala was Prince Perez, another Polo enthusiast who got very passionate when questioned about whether he would be reselling what he purchased.

Polo 1992 Stadium Collection will be releasing at SERIES by Bodega on Thursday, September 21st.  The release will be available through in-store raffle only, raffle entries will be accepted until end of day tomorrow Tuesday (9/19). For more looks and information – bdgastore.com @poloralphlauren #pololtd #polo #bdgastore #seriesbybodega

These sorts of gatherings took place all over the U.S. Ralph Lauren released the collection within its key doors but also distributed it to a Jimmy Jazz location in Harlem, Bodega in Boston, Fred Segal in Los Angeles and Selfridges in London.

“This is the biggest apparel release we’ve seen in our revenue as a business,” said Oliver Mak, a founding partner at Bodega, which sold the collection via a raffle. “Ralph pleases a cross-section of the streetwear and the fashion community with one brand and one collection. It’s a special thing that can cross all of the barriers.”

To celebrate the release, Bodega, which last sold Ralph Lauren’s RRL merchandise in 2009, set up a mini retrospective of the Polo Stadium line within its Series by Bodega space, a rotating venue around the block from its store. On the Wednesday night before the release it held an event, which Mak said drew East Coast members of the Lo-Lifes, a gang-turned-fraternity of sorts that used to steal, sell and wear Ralph Lauren, along with the younger customers who frequent Bodega.

“It’s just set up as a tool for explaining and teaching this younger generation about the brand. They know Polo, but they don’t know how much it impacts what they wear today,” said Mak.

While Ralph Lauren has re-released older styles — oftentimes new renditions of classic pieces that simply show up in a department store — this move marks a shift within the company. Not only is it distributing the line differently, but it’s speaking directly to a certain customer it hasn’t marketed to before.

“I’m sure we had something to do with that. I’m sure we inspired it,” said Thirstin Howl 3rd, who founded the Lo-Lifes and has his own Lo-Life line he designs with Willie Esco. The first collection, which was released in 2015, referenced the Stadium collection. “Ralph Lauren is always aware of what is going on in the streets. He is watching our whole culture and how much it’s grown. I think this is him acknowledging the culture.”

Bury me with the Lo on Second Edition with added archival and new imagery. Limited numbers. Pre order @burymewiththeLoOn.com

Last year Howl partnered with Tom Gould, a photographer from New Zealand, to release “Bury Me With the Lo On,” a book documenting the group’s impact — a second edition was recently released. According to Gould, Lauren caught wind of the book, requested a copy, loved it and enlisted Gould to shoot the campaign for the Polo Stadium re-release. Bruce Weber shot the last campaign.

“The company talked about the book on its web site the other day, which is the first time they’ve mentioned that culture,” said Gould. “It was very important for me to keep the campaign elegant but bring in a more personal touch and shoot it more through a portraiture lens.”

The Polo Stadium re-release hasn’t come without its criticism. There’s an image of a tombstone that reads, “Vintage Polo Game Died Sept 2017 r.i.p.” floating around the Internet. And although Will Wagner, a Polo collector who owns DeepCover, a vintage shop in New York City’s Lower East Side, believes the re-release will help his business by familiarizing more people with the merchandise, he wasn’t pleased with the roll out.

“This just created unnecessary hype for something that’s already huge,” said Wagner. “My main problem is I don’t want people getting into Polo for the wrong reasons and just liking it because it’s cool to like it. There’s an education that needs to happen.”

Esco has no problem with the re-issue, but he does want more retailers to show Howl’s line support.

“We’ve approached these retailers and I feel a certain way about being slighted,” said Esco. “Thirstin is a big piece of driving this culture, so it’s cool to support Ralph Lauren, but they should support Thirstin too when he puts out his second collection.”

Howl believes it’s good decision all around and it’s an opportunity for collectors who didn’t live during that era to get the pieces, which he actually wasn’t able to purchase, steal or sell in 1992.

“The crazy s–t is that I was in jail in 1992. I was watching TV and saw Biggie wearing it and I was mad I didn’t get any,” said Howl. “But I actually just got a package from Ralph. It’s all still in the box, but I know it’s all the pieces I would have wanted.”