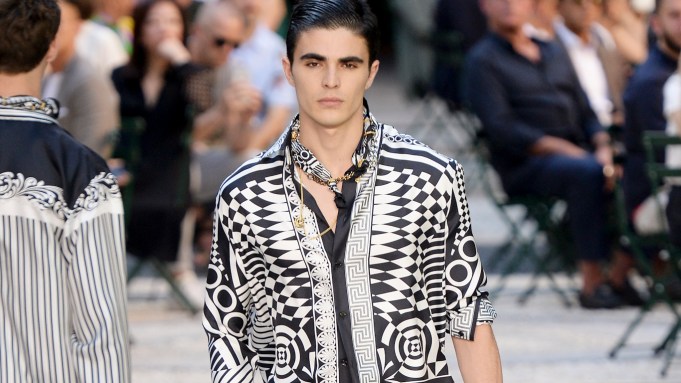 MILAN — Retailers were divided about the shorter fashion week in Milan, but they agreed that creativity was strong and that designers generally delivered.

Bruce Pask, men’s fashion director at Bergdorf Goodman, said “despite the fact there are fewer shows here, it is still a schedule packed with appointments, showroom walk-throughs and certainly runway shows. Milan Fashion Week is incredibly important and fruitful for us at Goodman’s, always.”

Maud Tarena, director of men’s fashion at Le Bon Marché, said brands are “mixing up lighter and warmer outerwear together” in a seasonless way. “Thom Browne, for example, offered down jackets and swimwear in the same show [Moncler Gamme Bleu]. Even the weight of fabrics is very versatile,” said Tarena, whose favorite show was Prada. It was “energetic and exciting,” she said. Tarena, however, was frustrated by the limited number of shows in Milan and said there were “no strong discoveries, no surprises.” The store’s budget remained stable compared to last year, she said.

Tom Kalenderian, executive vice president, general merchandise manager of men’s and Chelsea Passage at Barneys New York, singled out Ermenegildo Zegna’s show as “a standout. I loved the way Alessandro Sartori deftly balanced the elegance of this historic brand with modern luxury. Cleary the core of Zegna is the tailoring, and it was well-represented but in moderation and always in a new way. The sportswear was the star of the collection; mixing in all the current trends of safari and joggers in superluxe cloths.”

He also pointed to Kiton, “with a clear focus on how to attract the next generation to their extreme luxury. The mix of colors, such as classic tan jackets with a soft rose gilet and a playful brown bandanna print shirt with white jeans.” Cifonelli’s creative director, John Vizzone, “told a romantic story with his take on La Dolce Vita,” said Kalenderian.

Reece Crisp, men’s wear buying manager for Farfetch.com said Milan was about “the emerging talent offering up strong alternatives to the power houses.” Standout shows included Prada, Sunnei and Sulvam. “Prada as always delivered a super strong and directional show. The production was amazing, and the short-shorts eye-catching. Sunnei really shifted up a gear. The collection has a strong DNA that is fun and playful, yet this season offered more refinement and maturity. Sulvam’s debut in Milan didn’t disappoint. The soft tailoring was styled beautifully, and the denim was a nice juxtaposition.”

Crisp said sportswear continued to dominate, but he noted “it was nice to see more tailored references, particularly the double-breasted blazer.”  The Damir Doma x Lotto collaboration also was one of his favorites.

Karen Vernet, general merchandise manager of men’s apparel, homewares and private label at Printemps, said she found the mood “surprisingly somber, with lots of black and mixes of black and white, with touches of color. The exceptions were Ermenegildo Zegna, Salvatore Ferragamo, Marni and Fendi, which focused on soft tones in keeping with their DNA.” She also pointed to “an ever-festive mood at Dolce & Gabbana, with a fun fortune-telling theme that was eye-catching.”

Vernet said there were “not enough new brands.” The store’s budget was up, though, “reflecting the positive growth of the new Printemps de l’Homme building in Paris.”

Bergdorf Goodman’s Pask said he was “really liking the overall focus on proportion, with a return to a wider-leg, often pleated pant for a fashion customer, seen at Brunello Cucinelli, Giorgio Armani and Versace. Also, a new attention to slightly oversized wovens as a focus, as well as athletic jersey-inspired drop-shouldered tops were great companions in this proportion play, seen at Dolce & Gabbana, Off-White, Versace and elsewhere. We have been in a slim, trim world in men’s wear for quite a long time, and we are seeing traction in the shift toward a fuller proportion building momentum.”

Nick Wooster, fashion director for Forty Five Ten in Dallas, said Milan offered up some “new ways of looking at old things,” and that his standout shows were Ferragamo and the Japanese label Sulvam, which were on opposite ends of the style spectrum, reflecting how diverse the offer is today in Milan. He also described the Prada show as an “amazing event.”

As for the future of Milan and its shorter, slimmed-down schedule, Wooster said there will probably be a period of rebalance although he doesn’t fear for the city’s future as a fashion capital. “This is the cradle of fashion civilization. It’s a period – that’s all. Men’s wear has too much invested in this country – there’s just too much that happens here. It takes a village to make men’s wear – from the people who do the buttons, linings, shoulder pads, all of the artisans are based here. Perhaps Milan’s men’s week will contract, but I’m not worried about the longevity of Milan at all.”

Ken Downing, fashion director at Neiman Marcus, said  “The week felt meager in many ways because there were fewer shows, and I really miss the energy and vitality that Gucci brought. I appreciate what Gucci is doing, melding the women’s collection with the men’s, but they really raised the bar in Milan and it goes to show you what the absence of one power brand can do.”

Downing said he loved Prada and the Fifties retro/punk/New Wave attitude the show telegraphed, and how it dovetailed with the collections from Dsquared2 and Fendi. “I loved the styling at Prada and thought it had a fresh point of view. They delivered on the dream that the runway promises, giving us ideas about how to move forward.”

Downing also said that the Milan collections delivered lots of pink and blush “making neutrals look new” and said he was happy to see all of the leopard print, especially at Tom Ford. “All of the color and pattern in that show will put a smile on the customer’s face.”

He nodded to Giuseppe Zanotti’s “glove sock sneakers,” raved about Marcelo Burlon’s “big, powerful statement show” and said he was excited to see Palm Angels showing men’s and women’s together on the runway. Asked about the lack of big names on the calendar, he said it’s not only Milan that’s undergoing a “reawakening.” Downing believes it’s up to all fashion cities now to create a new show week model that’s compelling and energetic at a time when the traditional fashion show model is disappearing. “We’re at a point of reinvention, but fashion is all about moving forward and all cities have to think about what they are going to do.”

Holt Renfrew president Mario Grauso pointed to Versace and Prada as his favorite collections. “Versace was an amazing show as it represented the DNA and history of the house without feeling like a greatest hits collection from the archive. It felt modern and relevant without disregarding the heritage and having the show in the beautiful garden of via Gesù was a special treat.  We also loved Prada. In particular, the cartoon graphics as well as the proportions, especially the short-shorts, oversized coats, knee-socks and coveralls.”

Tortato had one strong complaint, though: “This season I had the feeling to be in a blender. We had to run from one place to the other like crazy. I think the organization was the worst ever and I honestly think that companies should stop showing at 9 and 10 p.m. It is insulting for those who have to actually work. At the same time, I liked that some brands, including Versace and Dolce & Gabbana with the evening event, organized smaller and cozier shows.”