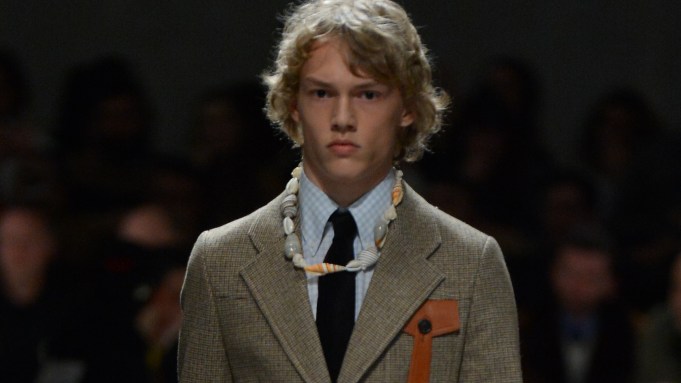 MILAN — In uncertain times, stick to what you do best.

A lackluster economy, sociopolitical issues and a general sense of instability prompted fashion brands showing their men’s fall collections in Milan to go back to their roots — accenting their expertise and responding to the ever-demanding customers faced with a plethora of offers at all price points, with focused collections.

That’s not to say that the designs were safe, as brands experimented with innovative fabric treatments and textures, lots of velvet and corduroy, bigger silhouettes, quilting details, strong outerwear and statement pieces as well as touches of primary colors to jazz up those gray winter days. Mountaineering, with rustic shearling, checks and down-filled puffers was also a strong trend.

Retailers responded positively. “Milan always builds a strong foundation for the season from both a fashion and a tailoring point of view,” said Bruce Pask, men’s fashion director at Bergdorf Goodman. “Kiton showed a terrific collection with lots of developments, including an incredibly luxurious vicuña collection of unconstructed sport jackets and evening jackets.”

Pask echoed several of his peers, who praised the debut of Alessandro Sartori at the Ermenegildo Zegna brand. “His runway show that married artisanal craftsmanship and a young, guy-on-the-go mood was terrific and timely.” Prada was also up high on his list of top shows, along with Fendi. The bigger volumes and the drop-shouldered coats were back and well- represented in the show “of the originator of that look, Giorgio Armani, as well as Neil Barrett.”

Nelson Mui, men’s fashion director of Hudson’s Bay, said, “Both politics and retail are being disrupted and everyone’s looking to regroup and figure out what the direction will be.” Mui said he was “loving all the fun outerwear on offer, from fuzzy furry textures, to Michelin-man parkas.” Prada, Marni, Cédric Charlier and Moschino were favorites along with Sunnei. He said Francesco Risso’s debut at Marni after Consuelo Castiglioni’s exit was “amazing,” and that it “really amped up” the label “with a zany, creative vision.”

David Witman, executive vice president of men’s wear for Nordstrom, said: “Milan offered a wide range of ideas that we think our customers will respond well to. Prada’s use of simple materials like corduroy, leather and wool created an accessible, vintage-inspired collection. Neil Barrett delivered a sophisticated blend of tailoring and streetwear that was inspired and wearable. Fendi stood out for its sense of fun and optimism, and we loved all the unexpected pops of color.”

Jay Bell, senior vice president of men’s designer and developing designer collections for Barneys New York, pointed to the “familiar, comfortable sensibilities” in Milan and singled out Neil Barrett, “who presented a standout collection, revisited his British heyday of the Eighties into meaningful, forward-looking clothes for today’s man. Removable skirts attached to tailored jackets, in timeless wool gaberdine, create iconic looks for the young at heart.”

He also liked Silvia Venturini Fendi’s “look back to the Eighties and Nineties for inspiration when creating looks for the new Millennial,” and singled out her “deft juxtapositions of a high-low concept.” And Miuccia Prada’s glance back to the Seventies worked best in “the corduroy trenchcoats and two-piece suits with leather appliqués,” he said, that “will prove to be very desirable for those looking to challenge the status quo today.”

John Totolis, Barneys’ vice president and divisional merchandise manager of tailored clothing and furnishings, liked how the suit “has become a bit looser fitting and is paired with sportswear underpinnings and a chunky dress shoe or clean sneaker which portrays a feeling of relaxed elegance. Alessandro Sartori’s return to Ermenegildo Zegna and Neil Barrett exemplified this best.” He also praised Cifonelli.

Tiziana Cardini, fashion director at La Rinascente, characterized the week as “positive and vivacious,” as it allowed “new injections” of creativity from brands such as Palm Angels, Malibu, with its “elevated streetwear,” Marcelo Burlon, Federico Curradi, Sunnei and Damir Doma. Cardini also thought Prada was “very beautiful, as a message and as a collection,” praised Fendi and cited “the promising debut” of Risso at Marni and Guillaume Meilland at Salvatore Ferragamo. She also liked the “more mature” MSGM, Versace and No. 21 and the performance of Antonio Marras. “I find these hybrid formulas, including the coed format, very interesting. It’s a scenario that is evolving, not static.” In the formal segment, she said Boglioli was “very sophisticated.”

Ken Downing, vice president and men’s fashion director at Neiman Marcus, addressed the fact that Gucci and Bottega Veneta skipped the season to show in February with their men’s and women’s collections together on the runway. “Although I understand and certainly respect” these decisions, said Downing, he “greatly missed the energy and anticipation that Alessandro Michele’s collection for Gucci has brought to Milan Fashion Week, as well of the sophisticated attitude that Tomas Maier’s collection for Bottega Veneta adds to the week.” That said, his favorite collections included Ermenegildo Zegna, Brunello Cucinelli, Tom Ford, Marcelo Burlon and Prada. He also liked footwear brand Giuseppe Zanotti and Santoni.

“Even missing some of the important brands, it was much more interesting than last season,” said Hirofumi Kurino, cofounder and creative director of United Arrows. “The geek/nerd mood was strong. It’s about developing a new type of character: sexy is out, geeky is in.” Kurino praised the Prada and Missoni collections.

Eric Jennings, vice president and men’s fashion director of Saks, admitted that Gucci’s exit from the calendar left a “bit of a void,” which Prada filled with energy and excitement. He called Prada, Fendi and Ermenegildo Zegna “impactful” shows and said statement outerwear — and the puffer in particular — was a big trend. “It’s so interesting that it’s continuing — from the business side, the puffer is already a bestseller. There are novelty ones, statement ones, all comforting and comfortable.” Other trends he cited were mountaineering, the “sneaker suit” or the suit with jogger-style bottoms designed to be worn with a sneaker.

Maud Tarena, men’s wear director at Le Bon Marché, said “the focus was on an easy, wearable wardrobe,” and she cited workwear and sportswear designs and the strong range of colors. Her favorite collections were Ermenegildo Zegna, Marni, Moncler Gamme Bleu and Prada.

“I think it was a good season. Luckily, many brands have evolved in their design,” said Riccardo Tortato, men’s fashion director for Tsum Moscow & DLT St Petersburg. “For example, Neil Barrett which in the last few seasons seemed a bit stuck, this time delivered a beautiful collection with many new elements. We are buying more and more every season. This season our budgets are 30 percent higher.” Other favorites included Ermenegildo Zegna, Fendi and Dolce & Gabbana. “This season there was less sportswear and more tailoring. This showed in soft constructions and relaxed silhouettes crafted from soft fabrics. There was a big use of cashmere and super soft fabrics. The so-called “Pitti Look” with fitted jackets and cropped, tight pants doesn’t exist in real life. Men don’t dress like that.”

Sam Lobban, senior buying manager for Mr Porter, said, “We saw Seventies classic Prada; rich colors, geek chic, lots of cord (which is definitely an overarching trend for the season), and incredible knitwear.” Lobban also said “Neil Barrett felt like a strong move on, with a kind of futuristic take on early Eighties post-punk. Missoni also felt like it had moved on in an interesting way.”

Overall, Myhr said, “sportswear has upheld its position as one of the main trends overall. The transition from catwalk to gym is made ever so easy.”