The store will join the other active brands in the neighborhood including Nike and Lululemon.

Rhone is jumping into the activewear fray in the Flatiron District.

The men’s brand has inked a deal for a 1,500-square-foot flagship at 133 Fifth Avenue, on the corner of 20th Street. Rhone will join Nike, Lululemon, Sweaty Betty, Bandier, Athleta and other active brands in the neighborhood, a stone’s throw from the iconic Flatiron building.

The store is Rhone’s third permanent location in Manhattan, joining what started as a pop-up in Times Square at 1585 Broadway, as well as a unit in Hudson Yards. The brand also has a shop at Chelsea Piers in Stamford, Conn., and a small location in Brookfield Place that will soon be closed.

The Flatiron store will be the largest in the fleet and is being viewed as the brand’s flagship, according to Nate Checketts, cofounder and chief executive officer.

“New York is our home and that’s where we wanted to put our flagship. We’ve always been in love with the Flatiron District and active row is still very much there,” he said, pointing to other activewear brands in the area. And although the pandemic has taken its toll on foot traffic, Checketts believes it’s temporary. “People will be walking on Fifth Avenue again soon,” he said.

Ditto for Times Square, where Rhone’s “little pop-up that could” has managed to hold its own over the past few months. “All of physical retail has been challenged, but we think of it as a blip in our long-terms plans,” Checketts said. “The data shows that in a post-vaccinated world, people will return to gyms and fitness classes, but some of the changes are going to be permanent and there will be less time spent in physical office spaces and more time at home, outside and, I believe, shopping. I think we’ll all be waking up from our digital sleep and want to experience the world a little more.” 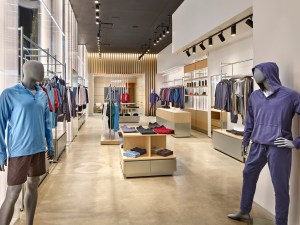 The store was designed to evoke movement.

The Flatiron store was designed in collaboration with Retail Design Collaborative’s Virginia Maggiore to be modern and evoke movement. It uses metal and light woods and features furniture from Herman Miller and Design Within Reach. It will carry Rhone’s full assortment of activewear as well as its Commuter Collection and technical products featuring the proprietary GoldFusion technology, an eco-friendly fabric treatment.

The store will feature Rhone’s partner, Tonal, a home gym-meets-personal trainer that allows shoppers to test product while doing full-body-workouts in the store. It will also offer a monthly run club that will meet at the unit, and when it’s safe to do so, classes, events and celebrity appearances are planned, Checketts said.

The store will have its grand opening on March 16 and for the launch, Rhone has created a special limited-edition T-shirt that will be sold only at that location.

Later this spring, Rhone will open a store on Newbury Street in Boston, its first in that city. That store, which will be smaller than the Flatiron unit at 1,100 square feet, will offer similar amenities, events and engagements when safe to do so, Checketts said, along with a work-from-home space from Herman Miller where customers can take a break from shopping to log on.

The planned opening of the two stores indicates Rhone’s belief that despite all the buzz around online shopping, “being in person still matters.”

Currently, 80 percent of Rhone’s business is direct-to-consumer and Checketts said the brand is still seeking to grow its wholesale penetration. The brand is carried at Nordstrom, Peloton, JackRabbit and other specialty stores and gyms around the U.S. It also has a presence internationally.

Rhone was founded in 2014 and in 2017, L Catterton made a significant investment into the brand, which is believed to have annual sales around $50 million. That followed the $6.2 million raised from a group that included former NFL Network and ESPN executive Steve Bornstein; David Stern, NBA commissioner emeritus; sports personality Ryen Russillo; Shane Battier, former NBA player, and M3 Ventures, an investment fund managed by former CAA executive Martin Dolfi.