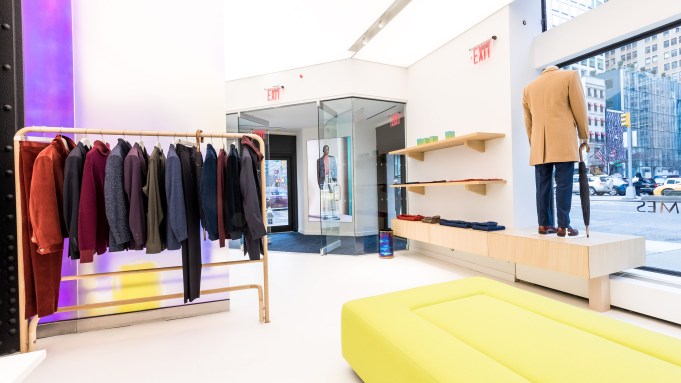 NEW YORK — It took over a quarter century — and a new majority owner from America — but Savile Row tailor Richard James has finally opened his first store in the U.S.

The 2,260-square-foot boutique on the corner of 57th Street and Park Avenue is only the third store for the London-based brand, which was founded by James and Sean Dixon 26 years ago. In March 2017, Dixon inked a deal to sell a majority stake in the business to one of its longtime customers, Charles S. Cohen, a billionaire real estate mogul based in New York. Dixon, who retains a minority interest in the company, had been searching for an investor to take the business to the next level and help it expand internationally. James no longer has any financial stake in the brand.

“This is our first American store,” said Dixon, whose title is managing director. “Our plan has always been to open in the States, and New York is the obvious choice.” He added that the company had been searching for a long time for the “right opportunity and time,” and Cohen’s investment — and the fact that he owns the retail component of the pre-war building — was the catalyst that led to the brand’s entry into the market.

Richard James has almost no presence in the States. It is offered at Mr Porter, a British online retailer that sells in the U.S., and in the past had been carried at Barneys New York.

The plan, now that the store is open, is to expand its wholesale business in the States as well, Dixon said. The company has opened a showroom nearby, at 750 Lexington Avenue, and Dixon said the brand will now start to have conversations with retailers about carrying the line.

“The wholesale business is tricky,” he said. “So we were waiting until we got the store open before we started talking to people. We need a base.”

The store was designed by Andy Martin Architecture, which also created the company’s original London flagship on Savile Row. It is divided into two distinct areas: one for ready-to-wear and one for bespoke. These are separated by a translucent screen treated with a dichroic film that changes color. The ceiling conceals an adjustable ambient lighting system and there is a stainless steel parquet floor.

“This store really has the design DNA of Richard James,” Cohen said. “So much about this space and location is perfect for this brand. It’s on a key corner of Park and 57th and the area is going through a whole revival. Park Avenue is becoming more of a retail street now. Before it was all about banks.”

The area has recently seen the addition of Chanel and other high-end brands including Richard Mille, as well as smaller boutique hotels and a bevy of art galleries. “And we’re in the shadows of the Four Seasons,” Cohen said.

He said the “whole area is like a mall — but in a good way — with Bloomingdale’s as the anchor” and a number of other popular retailers calling 57th Street home. Nordstrom, David Yurman and Ermenegildo Zegna are opening stores on the street next year and Louis Vuitton, Saint Laurent, Turnbull & Asser, Burberry, Miu Miu, Fendi and Coach have long called the street home.

Now Richard James can be added to the mix.

Dixon said this store is the first to carry both off-the-rack and bespoke collections in the same location. In London, there is one store at 19 Clifford Street devoted to bespoke — and the corporate headquarters — and another at 29 Savile Row that carries the rtw.

Dixon said although measurements for custom clothing will be taken in the New York store, the garments will be created in London. He added that he has already seen “quite a lot of interest” from New Yorkers and travelers to the bespoke offering in the store.

Overall, Richard James is 80 percent tailored clothing. But it also offers luxury sportswear such as velvet bomber jackets and knitwear, furnishings and accessories. Dixon said the deliveries will be frequent in order to keep the mix fresh and there are plans to create some exclusive items just for the New York store — “something people can’t find anywhere else,” he said.

Toby Lamb is the brand’s design director and works closely with Dixon. Richard James himself serves “more as a figurehead.”

Dixon said that with the demand for traditional suits on the wane, he’s expecting the sport coats and trousers to be more important in the New York store. The models are softly constructed, although he’s seeing the beginning of a trend toward more structured silhouettes. “And we’re seeing a lot more interest in color and knitwear,” he added, both of which have long been a Richard James signature.

The store was actually expected to open a year ago, but it was hit with construction delays, meaning that it is debuting “when everybody else is on markdown,” Dixon said. Even so, he’s hopeful the store will find its footing and be successful.

Cohen said Richard James is “doing great” and he’s happy with its performance since the investment nearly two years ago. “Sean is working on a sportswear line that will launch in September and a fragrance that will be out in March,” he revealed. “And he also wrote a book memorializing the first 25 years of Richard James.” The book is available in the store as well.

He said the company is searching for a location in a trendier part of London to open a separate sportswear store next year.

“This is just a wonderful brand,” Cohen added. “It was the first one to get me excited about this initiative.”

After purchasing the majority interest in Richard James, Cohen bought Harrys of London, the footwear and accessories brand, and opened a retail store right next door to the Richard James space. His most recent addition was T. Anthony, the luxury leather goods and luggage brand, that he acquired in May. Together, the three brands are part of Cohen’s Curated Lifestyle Collection company, an umbrella company that covers all of Cohen’s interests including high-end film exhibition, hotel ownership and management, wine production and fashion.

Dixon said the British company is “actively in discussions to globalize the brand” and is seeking franchise partners in other countries. “That gives us more control,” Cohen said. Richard James has a strong licensee in Japan, where the brand is popular, Dixon said.

He said going forward there will be a “big emphasis on growing the business in the States,” which could include opening another store. But that’s for down the line.