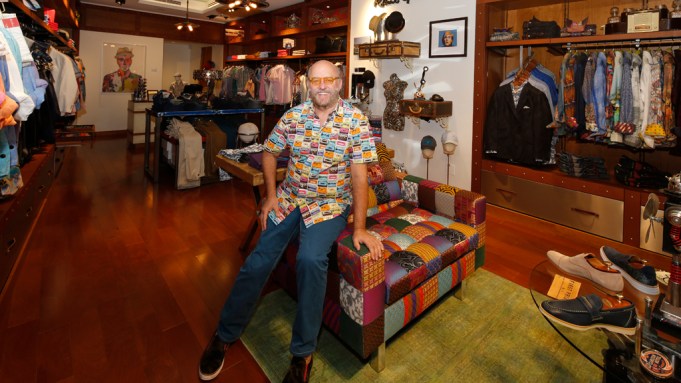 The brand, which started life as a men’s woven shirt label 15 years ago, will open its latest store here on Wednesday: an 800-square-foot boutique at the Time Warner Center.

The unit, which is located on the main floor of the indoor mall, marks the 23rd boutique for the brand, which has moved beyond its roots to become a full lifestyle label.

“New York is becoming a mecca for international tourists and the Time Warner Center is like the Taj Mahal,” said founder and designer Robert Stock during a walkthrough with WWD.

He said the company actually contracted for the site 18 months ago, but had to wait until a jewelry store vacated the location.

The store offers an edited collection of the brand’s varied offerings. In addition to its boldly patterned shirts, the store carries a smattering of tailored clothing, dress shirts, jeans, polo shirts, shoes, accessories and a small assortment of women’s shirts and dresses. The X collection of more formfitting shirts targeted to a younger customer is also featured.

“It’s a little like a treasure hunt,” Stock said. “Because of its size, everything is curated.”

The design has been updated with “more face-outs so the garments are easier to read,” Stock said. The overall aesthetic is “like an old-fashioned trunk” with lots of unique trinkets and paisley leather trim on the fixtures.

The props throughout the store were all chosen by Stock and include such unique items as a vintage McDonnell Douglas rudder controller, display tables fashioned from old car hoods, rugby balls that double as seats for stools, a lamp created from sunglasses, and a Charles Eames antique coat rack in the fitting room.

Artwork includes a portrait of Andy Warhol created entirely of beads as well as a Danskin bust made from more than 100,000 individually selected buttons.

The store features a “shirt chair” that was created using 150 differently patterned shirts, a patchwork-covered easy chair, fitting room curtains in silk neckwear fabrics and a custom-designed ceiling that features all of the brand’s signature graphics, including sketches of a bulldog, the Robert Graham man and others. The ceiling was patterned after the one in Grand Central Terminal, Stock said.

“Everything’s very tongue-in-cheek,” he said. “Our customer is big into travel: cars, boats, antiques. So a curated look is what the company is all about.”

Stock said that in addition to the brand’s cash cow — its embellished shirts, some of which are limited in number and signed — Robert Graham does well with jeans and the newly launched tailored clothing.

On the wish list for the future are home furnishings and the expansion of its women’s label, he said. A Robert Graham men’s fragrance will launch in July.

Stock said the label has “international plans” and is looking for locations in Europe, the Far East and South America. “We’re in around 1,000 specialty stores right now and our business is pretty good,” he said. “We have a cult following.”

In June 2011, Robert Graham received a cash infusion from Tengram Capital Partners LLC and since that time has doubled its volume to more than $300 million.

William Sweedler, cofounder and managing partner of the Westport, Conn.-based Tengram, said: “The entire Robert Graham team, led by [chief executive officer] Michael Buckley, has executed superbly on the playbook Tengram initiated upon its investment almost five years ago. Each specific chapter identified has grown substantially in revenues and profitability. Product has been expanded into a full luxury collection ranging from sportswear, accessories and tailored [clothing] to footwear, fragrance and leather goods. Tengram continues to be bullish on continued growth.”