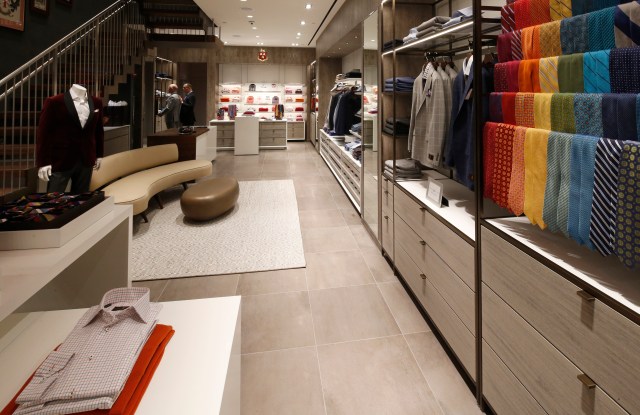 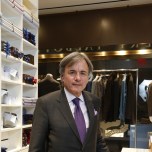 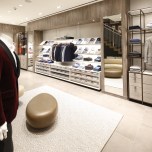 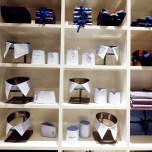 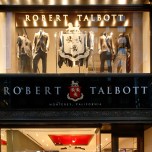 NEW YORK — Robert Talbott has brought a slice of Monterey to Madison Avenue.

The Northern California-based men’s wear brand has opened an 1,800-square-foot shop at 501 Madison Avenue, between 52nd and 53rd Streets, its first store in New York in many years.

“There are so many eyeballs here,” said Robert Corliss, who has been the company’s chief executive officer for the past five years. “Many years ago, we had a tiny shop here that sold only shirts and ties. But we do a lot of business in New York, people here know the brand and we have a fairly loyal contingent, and you really can’t buy it here.”

Talbott, a 66-year-old label that is known mainly for its high-end shirts and neckwear, focuses most of its wholesale efforts on independent retailers.

“We took the deliberate path to work closely with specialty stores,” Corliss said. “That industry is beleaguered, but I think it’s reached its low point. So we’re hoping we can help reinvigorate a good path in front of them.”

Instead of wooing large retailers, Corliss, whose extensive retail background includes ceo of Herman’s Sporting Goods and The Athlete’s Foot, has been focused on opening shops-in-shops at specialty stores around the country. There currently are about 10, including the most recent that opened at Hubert White in Minneapolis this week. Others are at Carroll & Co. in Beverly Hills, the Ascot Shop in La Jolla, Calif., and M. Dumas in Charleston, S.C.

“That’s going pretty well and is slated to grow,” he said. “They range from a couple hundred feet to 800 square feet. This is our first taste to see how our brand extension is working.”

Since taking the helm in 2011, Corliss has worked to expand beyond furnishings. The brand now offers a full men’s wear collection, including suits, sport coats, knitwear, dress and casual pants and accessories. Made-to-measure clothing and suits are also offered.

“We wanted to test the elasticity of the brand and create a collection,” he said.

He said shirts now represent around 25 percent of sales, with the other categories making up the remainder. He declined to provide a volume figure for the privately held company but said, “It’s not big enough.”

The apparel and furnishings are all manufactured by Talbott in the U.S. and Europe, Corliss said, but there are licenses for categories such as socks. “And we’re looking for more.”

Corliss is now the sole owner of Robert Talbott, which was founded by Robert and Audrey Talbott, who left the East Coast in 1950 and moved to Carmel, Calif., where they started a business based on Audrey’s skill making handcrafted silk neckwear. Robert died in 1986 and his wife ran the business until her death in 2004, when it was passed on to their son Robb Talbott.

Robb Talbott was primarily a winemaker and focused on that business, which was sold to E&J Gallo Winery last year. He is now retired, according to Corliss.

Although the bulk of the business comes from specialty stores, Robert Talbott does operate five of its own stores in the U.S., in Dallas, Atlanta, Pebble Beach and Carmel — and now New York. Corliss said the company will add a unit in Newport Beach, Calif., at the Fashion Show Mall in April.

“We see adding some more, but not a whole contingent,” he said. “But we would like to go international.” He cited Tokyo, Seoul, Singapore, Hong Kong, Paris, London and other “major metro markets” as tops on his list.

“We’re also trying to figure out our next generation of customers,” Corliss added, saying that most of the current base centers around older men who are accustomed to dressing up for work and are struggling with the new order of casualization. “That’s a huge opportunity for specialty stores.” And then there’s the younger guy “who never had to dress up. Those are our two big buckets of opportunity.”

The New York store seeks to appeal to both types. The two-level location offers the ready-to-wear and furnishings on the lower level and made-to-measure on the second floor. The design is modern but with hints to the brand’s heritage including redwood cabinetry and fixtures as well as a large assortment of photos on the brand’s history that cover the walls on the stairway.

Even so, Corliss believes Robert Talbott will find its place in the competitive New York market. “There’s really no bad product at this level of the market,” he said. “This is a small business in a tough industry, but there’s a high quotient of satisfaction and a really deep emotional connection to this brand.”