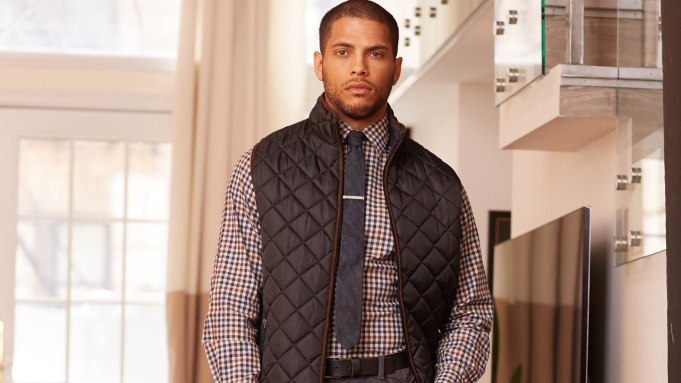 Argyleculture is a lot like a cat with nine lives.

The preppie-inspired urban brand created by hip-hop mogul Russell Simmons in 2004 has exited Macy’s after eight years and is launching at J.C. Penney Co. Inc. for fall.

Penney’s, which has a long history of appealing to the young men’s customer, is aggressively targeting the Millennial male this season by adding a number of new labels. Argyleculture will join jeans by Buffalo and Decree as new additions and complement MSX by Michael Strahan, Ecko Unltd. and JF J. Ferrar.

“Young men, ages 25 to 35, are driving big growth at J.C. Penney and represent a very important customer segment,” said John Tighe, chief merchant for the Plano, Texas-based retailer. “This demographic has a lot of spending power and is very opinionated about the style and fit of his clothes. As we continue to elevate the perception of J.C. Penney with this target customer, it’s critical that we bring him trend‐right brands at an incredible value to stay at the top of his consideration set.”

Tighe added that, “Argyleculture is reflective of Russell’s sharp style and will help to differentiate The Men’s Store at J.C. Penney. As an on-trend, quality brand that appeals to both the Millennial man and the mature professional, Argyleculture has broad appeal that will elevate the perception of J.C. Penney among style-driven men.”

He said the brand will sit near sportswear brands including U.S. Polo Assn. and Claiborne within the store. Out-the-door prices will include polos for $24.99, twill pants for $31.99 and blazers for $69.99.

Simmons said the price points were brought down as a result of Penney’s more moderate approach, but “we have better-than-competitive fashion and fabrications for the price.”

He added that making the jump from Macy’s to Penney’s was a no-brainer. “This company [Penney’s] stepped in and bought more than 10 times the amount of merchandise,” he said. “They’ve been nothing but the best partners.”

He said that at Macy’s, the label was languishing as the urban business struggled and as a result, the small order size handcuffed the brand. “The minimums weren’t enough for us to be creative,” he said. But he believes Argyleculture’s new home will allow the line to “flourish. Penney’s is putting it in a significant number of stores and giving it a lot of floor space.”

Simmons said he created the brand “to help cultivate passion, drive and professionalism through fashion.”

And while prior iterations zeroed in on the urban shopper’s propensity for more baggy clothes, their sensibility has changed and Argyleculture has shifted its focus as well.

Simmons said the line, which he referred to as “a classic American-inspired collection,” offers a “slimmer” cut than competitors Tommy Hilfiger or Ralph Lauren and many of the styles will have stretch properties. “Every jacket will have tons of Lycra and the pants will also have 10 percent Lycra in them,” he said. Shirts will also be “more tailored.

“That’s the white space for the young Millennial urban population and that’s where we’ll be really unique,” he said.

The collection was created in collaboration with New York-based Bernette Textile USA. “The goal for this fall’s collection was to be able to offer affordable and versatile attire to a fashionably conscious audience without losing the quality in the pieces,” said Jeffrey Siskind, president of Bernette Textile.

Simmons said Argyleculture is targeted to the “urban graduate” and has a “swagger to it.” He came up with the concept for Argyleculture when he was with Kellwood Corp., which purchased Simmons’ Phat Farm business for $140 million in January 2004. When Simmons split with Kellwood in 2007, he took the Argyleculture label with him.

Simmons said he remains committed to the brand and believes it will ultimately find its niche. “It took me six years to make a penny on Phat Farm,” he said. “But hard work, dedication, faith and resilience are key.”

Outside of Argyleculture, Simmons is committed to his daily yoga practice and is turning that into a business as well. He is building a Tantris Yoga Center in West Hollywood and will also create a complementary apparel collection that will appeal to yogis seeking “premium, sophisticated” merchandise to wear to and from their practice.