The Ermengildo Zegna/Fear of God collaboration and Reese Cooper are both being showcased in the store.

A look from the Zegna/Fear of God collection.

With more of its competitors struggling or closing their doors, Saks Fifth Avenue is aggressively keeping its foot on the accelerator to further build its men’s business.

For more than two years, the retailer has experienced an increase in men’s sales as a result of strong consumer reaction to footwear, advanced designer and contemporary brands. The category is today believed to represent some 30 percent of the company’s overall business, according to sources.

The retailer is adding some buzzy brands to its mix for fall to continue the momentum. They include the Fear of God collection for Ermenegildo Zegna, as well as a Reese Cooper pop-up shop.

Louis DiGiacomo, senior vice president and general merchandise manager of men’s for Saks, said: “Our men’s business continues to thrive as we focus on elevating our merchandise assortments with exclusive collaborations like Fear of God for Ermenegildo Zegna and introducing more fashion-forward designers like Reese Cooper. We have seen double-digit growth in men’s and plan to invest even more heavily in the category to take it to the next level.”

To promote the launch of the Zegna/Fear of God collaboration, the retailer hosted a virtual conversation between Roopal Patel, fashion director, and Alessandro Sartori, artistic director of Zegna, and Jerry Lorenzo, founder of Fear of God, on Zoom Thursday afternoon.

DiGiacomo said the Fear of God Exclusively for Ermenegildo Zegna collection “gives our advanced designer customer a fresh perspective on how to wear tailoring in a fun way without feeling so formal. We were honored to have the opportunity to celebrate the collaboration with an exclusive discussion between the two designers as our latest virtual event experience for clients and SaksFirst Limitless members.”

The 30-minute webinar focused on the “unexpected union” between the sartorial Italian luxury brand and the Los Angeles-based streetwear label, which Patel said created a new “grammar about men’s wear.”

The two designers met around two years ago, they said, and had no plans to work together at first. But after realizing they had more in common than they originally thought, the idea was hatched to create a co-branded collection that spoke to the “evolution of the modern man.”

Sartori said they found they had a “common vision for a modern approach,” one that focused on familiar pieces updated to represent a “freer, more honest” offering. That includes suit jackets that could also work as outerwear or button-down shirts that could be worn as jackets. “It’s modern because it lasts forever but at the same time, it doesn’t follow classic roots,” he said.

Lorenzo added that the collection is intended to speak to the wardrobe needs of today’s man, which are “more fluid” and blend comfort with sophistication. “For me, one of the huge things with tailoring and why there’s such a huge gap between what was happening culturally within fashion and tailoring is that there’s this intimidation and a formality about tailoring,” he said. With this collection, he said the goal was to remove some of those elements to make it a little less off-putting by taking a lapel off a coat or blazer or tweaking other pieces. By updating items that generally speak to traditional tailoring that would be worn by a businessman or a Wall Street guy, the collection “removes some of those small nuances but still presents the craft in the same way by proposing these pieces in a new and fresh way that speak to today,” but still “chase timelessness,” he explained.

One thing the collection didn’t do, however, was offer gender-neutral pieces. Lorenzo said it’s a “scary place to land when you create [something] with a genderless shape, because you can land in the middle” and not create something that works well for either a man or a woman. So while both designers “love the way a woman looks in a man’s proportion,” Lorenzo said, the collection was designed on a man’s frame.

Meanwhile, on Friday, the retailer will unveil a pop-up installation from Los Angeles-based designer Reese Cooper in its Atrium on 7 men’s department at the flagship. The Atrium is a rotating space that showcases men’s launches, collaborations and exclusives. 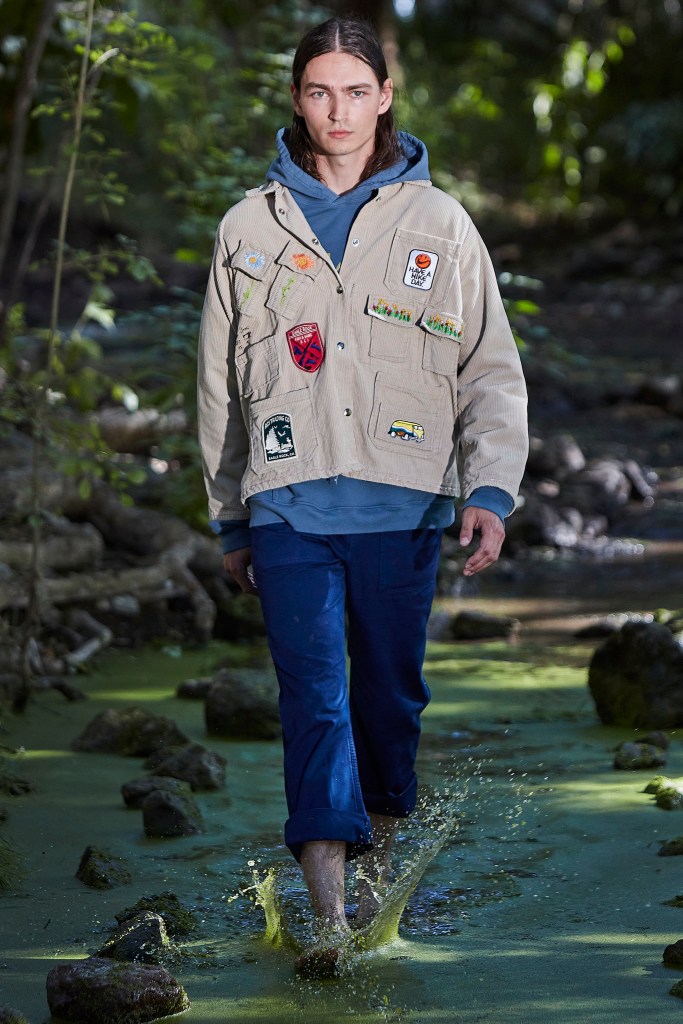 The 12-foot-by-12-foot Reese Cooper shop plays off the designer’s “If a Tree Falls” fall 2020 collection inspired by the great outdoors and featuring natural elements such as real moss and trees as well as a depiction of a mountain scape.

This is the first time Saks has carried the collection, said Cooper, who added that it will also be offered at the company’s store in Beverly Hills as well as online.

Among the exclusives that will be featured are a camo hunting jacket, cargo pants, hoodie and T-shirt. The jacket and cargos are made from deadstock camouflage fabrics that were offered only to Saks, while the hoodie and tee were created in exclusive colors and graphics for the store.

DiGiacomo said: “Reese provides a unique perspective and his clothing feels very directional and on trend with what we’re seeing in men’s wear.”

Cooper has started to generate some buzz and his collection is now being carried at such directional retailers as Harrods, Mr Porter and Selfridges. And Ssense in Canada is adding the designer’s women’s collection for fall. “I’m really excited about that because I’ve been sampling women’s for a while now and it finally hit,” Cooper said.

Cooper, whose signature product is outerwear along with technical bottoms, launched his collection four years ago when he was 18 years old. He is known for his upscale, utilitarian-flavored streetwear with elements of vintage sportswear that is heavy on outdoor elements.

The stop will remain open through Oct. 15.