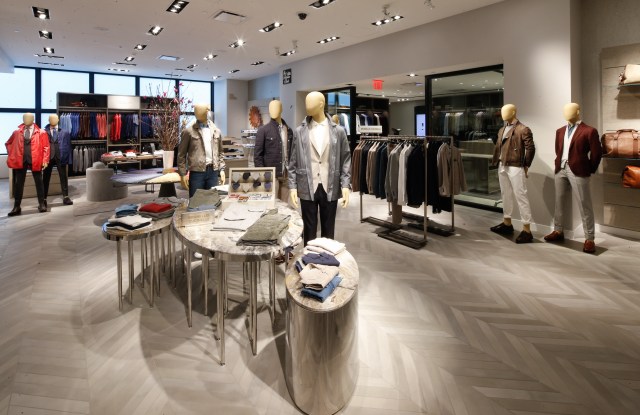 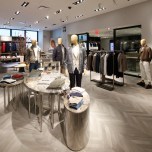 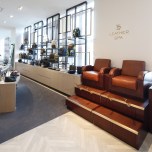 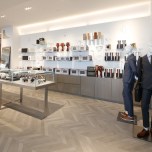 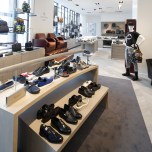 NEW YORK — Saks Fifth Avenue is doubling down on lower Manhattan with the opening of a men’s store in Brookfield Place.

The 16,750-square-foot one-level store joins an 85,000-square-foot women’s store that opened over the summer in the former World Financial Center and is the latest major retail move in the area in the wake of completion of the new World Trade Center.

Although the retailer operates other men’s-only stores in Chevy Chase, Md., and Beverly Hills, Metrick said these were “actually built for women. We needed to pull men’s out to make the women’s more productive.”

While this is the case at Brookfield as well, the company took particular pains to ensure that the men’s store has a distinct aesthetic. It was designed in collaboration with Casco and features chevron-patterned porcelain flooring, hand-crafted woven wall coverings and a bank of windows that face the Statue of Liberty.

In a walk-through prior to the opening, Eric Jennings, vice president and men’s fashion director, said the store is “prime to service the young, urban professional who is working downtown.” The location at 250 Vesey Street is home to Merrill Lynch and other financial firms.

Although a fraction of the size of the men’s presence at the Midtown flagship, the Downtown Men’s store offers an edited assortment designed to appeal to a wide spectrum of customers. “We believe there’s a new customer not interested in runway trends but who doesn’t want to wear his father’s brands either,” Jennings said. “He’s somewhere in between and we curated the matrix to address this guy.”

Metrick said he believes “small is the new big — people like to have an edit. It makes them feel more comfortable and provides a sense of discovery.”

He pointed to the recently opened 10022-Shoe and The Collective contemporary women’s concepts in Greenwich, Conn., as examples. The Vault for fine jewelry is expected to open later this year. He said it’s “not in the plans” right now to open category-specific men’s stores.

But for now, the focus is on Brookfield Place, which Metrick characterized as being located at “the crossroads of the world’s financial district. It’s the perfect place for men to go shopping.”

Although Brookfield — and the adjacent Westfield World Trade Center — has managed to attract a large number of brands, the performance of the stores has been mixed.

Wendy Liebmann, chief executive officer and chief shopper for WSL Strategic Retail, said: “The only place I’ve ever seen traffic is on the food side where they’ve created a really compelling offer. But when you walk out into the main stores….nothing. Half is perfect and the other half feels like a museum.”

Even so, the centers continue to attract high-end tenants.

Asked about sales within the women’s store, Metrick said it’s still “too early to call,” adding, “but overall we’re pleased.” And he’s even more hopeful about the new store since men’s continues to be among the best-performing categories for Saks. “This is our opportunity to stick a flag in the ground.”

Tracy Margolies, Saks’ chief merchant, said the men’s store was “created as more of a boutique” and will offer expanded assortments of key categories such as athleisure, apothecary, fragrance, designer footwear, and an “intensified designer sneaker” assortment.

“And there will also be a lot of experiences,” Margolies said, including a Fika Coffee Shop and a Sharps barber shop scheduled to open in April. A Leather Spa location, offering shoe shines and repairs, will also be included.

“And we’re going to have a different pop-up every month,” she said.

The first, Saks’ World of Sneakers, will offer more than 200 styles from brands including Fendi, Givenchy, McQueen, Maison Margiela and others. About 40 of the styles are exclusive to Saks.

Across from the pop-up is a technology department with headphones, cell phone cases, fitness bands and even a charging station. “We’ve never traded in this zone before,” Jennings said.

Additionally, there’s a large assortment of shoes, ranging from classic to contemporary. “We’ve discovered shoes are the entryway for guys wanting to get into designer apparel,” Jennings said, noting that several of the brands are not carried in the flagship uptown including Saint Laurent, Thom Browne and Stella McCartney.

Nearby are over 500 belts and 400 sunglasses as well as an assortment of small leather goods and accessories.

Next up is the advanced designer department with Moncler, Dries Van Noten and Off-White, which Jennings said is “the hot brand of the moment.” Lanvin is here but not uptown, as are Saint Laurent and Margiela.

The contemporary area is being anchored by Officine Generale and Ami and also includes Paul Smith, Vince and Theory. The ath-leisure offering includes EFM, North Sails, MPG, Orlebar Brown, Canada Goose and Vilebrequin. The Anthony Davis collaboration will also be carried here, he said, along with a curated denim assortment.

The apothecary department will be “a big statement,” Jennings said, adding “we don’t have room for it uptown.”

The Saks Fifth Avenue Men’s Collection is used as a bridge into the classic department where brands such as Cucinelli, Isaia and Boglioli are joined by Charvet and Eton shirts and Incotex trousers.

In the rear of the store is a made-to-measure department. Here, customers will be able to choose from eight models and hundreds of fabrics to design their own suit that will be projected onto a full-size video screen. The merchandise will be available in around six weeks and will retail for $900 to $2,200, Jennings said.

There’s an area for a catered “Power Lunch” and shopping, a Mercedes-Benz Sprinter that will travel to homes or offices for special appointments and Saks Save Me, a special hotline customers can call if they have a “fashion emergency” that needs to be addressed, Jennings said.