A rendering of the new men's footwear floor.

Later this week, the store will take the wraps off a new men’s footwear department that it boasts will be one of the largest luxury shoe destinations in the country.

The 8,000-square-foot space unites shoes in one central location on the sixth floor in an area that has 60 percent more selling space. It will offer 2,000 stock-keeping units  from 60 brands — 15 of which are new to the store — and 160 exclusives, as well as other amenities such as shoe repair stations, extended sizes and personalization stations.

“We know how to build a category-dominant business,” said Marc Metrick, president of Saks. Metrick had been head of planning for Saks and chief merchant Tracy Margolies was vice president of women’s footwear more than a decade ago when they worked together to create Saks’ successful 10022-Shoe women’s floor.

“Twelve years ago, we built an amazing destination,” Margolies said of the women’s floor, one that offers up a “fun and social experience. There’s no reason not to re-create the same thing for men.”

She said when the management team sat down and talked about redeveloping the New York store, they “thought long and hard” about how to reimagine the men’s footwear offering.

“Men’s footwear is a priority for us,” Metrick said. He said the entire men’s department will be getting a facelift next year, but the decision was made to start the project with shoes. “If you’re doing a multiyear remodel of the men’s store, it makes sense to start with the area that’ll have the biggest impact.”

Over the past four years, the retailer has been reimagining and re-creating much of its Fifth Avenue flagship. In February, it unveiled a new main floor focused on luxury leather goods and accessories and an impressive Rem Koolhaas-designed multicolored escalator to lead up to an expanded beauty floor on two.

The 646,000-square-foot flagship accounts for about 20 percent of Saks’ total volume and four years ago was appraised at $3.7 billion.

Men’s is housed on the sixth and seventh floors of the store with powerhouse classic brands such as Kiton, Isaia, Loro Piana and Brunello Cucinelli surrounding the new men’s footwear space on six. More contemporary lines are housed on seven.

Prior to the renovation, shoes were carried on both floors and customers had to take the elevator or main escalators to move between floors. But now, a metal and stone staircase with dichroic glass has been added in the center of the shoe department that allows customers to easily travel between the two. 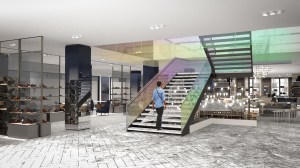 A new staircase will lead shoppers between the two men’s floors.

Calling shoes “a gateway drug to fashion for men,” Metrick said the staircase is also expected to “spur on purchases of apparel” as it draws customers with its popular product offering and updated aesthetic. The old shoe departments were dark and had wood displays that “just screamed old,” Metrick said. “This is airy, wide open and bright and is much more social and inviting.

“Men are where women were a half decade ago,” he continued. “They’re finding their way. For a guy to get comfortable with French and Italian [apparel] designer brands, we need to bring them in, and footwear and sunglasses are the way: They’re comfortable with those right away.”

He said if you were to ask most men what pieces of Gucci or Prada they own, they’d usually say it’s either sunglasses or “in the last few years, sneakers. That’s where we’ve had unbelievable growth with men. Shoes are now the foundation for fashion.”

Margolies said the number of men choosing to shop at Saks has grown in the double digits of late “and footwear is outpacing our men’s growth. Men’s footwear is really the entry point for luxury fashion.”

She said sneakers are “a very important category” and Saks will service that shopper with “the newest and hottest” models.

Metrick acknowledged that there is intense competition for the latest and greatest sneaker models, but he’s unconcerned. “From a category dominance standpoint, this puts Saks right at the center. There’s no reason to go anywhere else for designer footwear in New York. It will be a very powerful presentation and what we have you can’t get anywhere else.”

Among the amenities that will be offered is an Aglit Italy Lace Bar that will allow customers to personalize their shoelaces. There will be made-to-order programs from Pierre Corthay, Ermenegildo Zegna, Salvatore Ferragamo, Santoni, John Lobb, Bally, Artioli and others. There will be a Leather Spa shoe shine and repair station, 30 multilingual style advisers on the floor and brand-specific associates in each vendor shop.

Margolies said the department will be merchandised by brand and there will be a drop spot in the center where new product will be offered on a weekly basis. Every day this month, exclusive products will be touted on Instagram. “People want what’s hot and new and next,” Margolies said. 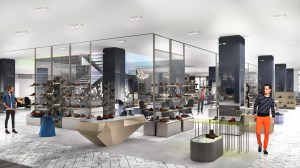 The new men’s footwear floor will offer some 2,000 stockkeeping units.

“What I love about men is that 70 percent of our male customers still shop in our stores,” Metrick said. So the goal was to build a department that would be easy to shop and educational. Saks plans to hold a number of events in the space, including a panel discussion with restaurateur and fitness influencer Brian Mazza on July 25 and a Puma sneaker launch by Alexander John and an appearance by Upscale Vandal on Aug. 8.

The expanded footwear assortment will be specific to the flagship, although other key stores such as Beverly Hills and Brickell in Miami will also get some of the new product. “The flagship is the beacon for us and sets the example,” Margolies said.

Metrick said that although Saks made a bold move by relocating its beauty department off the main floor and turning that space over to handbags and accessories, it has paid off. “When we opened our handbag floor, we saw that having differentiated and unique product works.”

The flagship renovation includes the opening of L’Avenue at Saks, the only American outpost of the famed Parisian restaurant that was designed by Philippe Starck; a new jewelry department on the second floor; revamped women’s designer and contemporary floors, and the addition of some new shops to the 10022-Shoe department. The Vault, an upscale jewelry presentation, is expected to be unveiled in September.

Saks has been a bright spot for its parent company, Hudson’s Bay Co., which is seeking to go private. In June, the company reported that overall earnings for the corporation in the first quarter totaled 275 million Canadian dollars, up from a loss of 398 Canadian dollars a year ago. This included a boost of 817 million Canadian dollars from the sale of the Lord & Taylor Fifth Avenue flagship. In the period, comparable-store sales for Saks rose 2.4 percent, making for a two-year stacked comp of 8.4 percent.

Helena Foulkes, chief executive officer of Hudson’s Bay, attributed the strong showing to the renovation of the Fifth Avenue flagship. “Our New York City clients have embraced the flagship’s new main floor, which redefines the luxury shopping experience with a one-of-a-kind handbag assortment featuring exclusive products and brands only available through Saks,” she said.