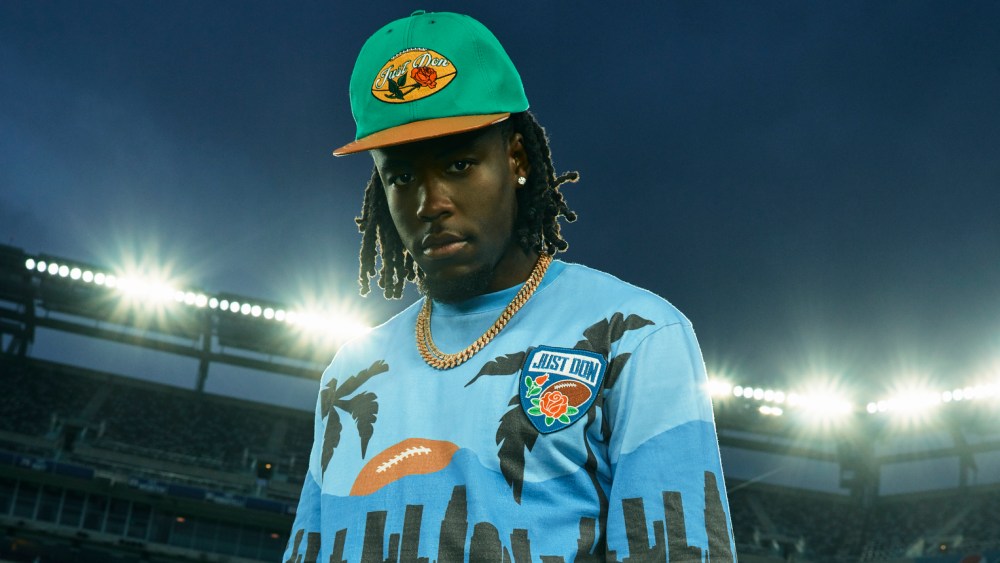 Saks Fifth Avenue is preparing to celebrate the Super Bowl in an even bigger way this year.

Starting in 2019, the retailer has worked with designers to create special collections tied to the big game. It started out small, with 26 brands participating in Atlanta two years ago, and in 2020, when the game was in Miami, it was expanded to 25 designers and more than 100 products.

The response to both of those initiatives prompted the company to scale it even further for this year’s match-up, which is slated to be played on Sunday, Feb. 13, at SoFi Stadium in Inglewood, Calif. Saks has worked with 28 of its top brands to create 275 limited-edition ready-to-wear, footwear and accessories products that will include women’s- and children’s-specific merchandise for the first time. It launches today.

The initiative is being tagged Game Day Capsules and among the brands that are participating are Alyx, Balmain, Christian Louboutin, Dolce & Gabbana, Givenchy, Just Don, Purple Brand, Rhude, Theory and Versace.

Other changes this year include a partnership with Denver Broncos wide receiver Jerry Jeudy, who is featured in the digital campaign, as well as activations in several stores outside of the host city.

Louis DiGiacomo, senior vice president of men’s for Saks, said the 2022 initiative is “major,” with its 360-degree approach that encompasses both extensive merchandise and marketing.

“New this year is women’s and kids, so we can now dress the entire family for game day,” he said. In addition, the products offer more of a “sports vibe” as well as a Los Angeles-inspired sensibility because of the location of the game.

The partnership with Jeudy also marks the first time Saks has used an athlete for its Super Bowl initiative. DiGiacomo said when Saks was looking for a player to team with for the campaign — which is going to be shoppable — it thought Jeudy would easily connect with its customers.

“We wanted to cast somebody who was up-and-coming,” he said. “Jerry has a strong personality and a fashion sensibility that shines through in the digital campaign. He’s an energetic and passionate young man.”

DiGiacomo said that the most popular category in the past has been footwear, driven by sneakers, along with designer rtw and accessories from Givenchy, Amiri, Off-White and Moncler.

“We expect that to continue this year and we think denim will become more important,” he said of the category, which has been gaining in importance for the company of late.

He also anticipates that some of the new brand additions will garner interest including Casablanca, Ksubi, Polo Ralph Lauren and Reese Cooper.

Once again, Saks is not working directly with the National Football League, which trademarked the term Super Bowl in 1969 and charges a fee to use the words. DiGiacomo said the store believes that by staying independent it has more flexibility in how it can work with fashion brands to execute product.

The Game Day Capsules will be promoted in Saks Beverly Hills, which will host designer appearances with Purple Brand and Just Don, a denim customization with Ksubi and a football arcade game activation with Bossi Sportswear. Additionally, Saks will hold activations at other locations across the country in stores with strong men’s businesses, including Atlanta, Chicago and Houston where “sports infused with fashion” has historically been strong.

“This is the first time we’re doing activations outside the host city,” DiGiacomo said. “We see Game Day weekend being successful across the country.”

He added: “Men’s continues to be an important part of Saks’ business and continues to grow year-over-year.” He also revealed that starting this week, a major renovation of the men’s apparel department at the New York flagship will begin. The project will start on the seventh floor and is slated to be completed in the fall. In 2019, the company reimagined its footwear department on the sixth floor at the flagship, creating an 8,000-square-foot home that boasted 60 percent more selling space. Both renovations are part of a $250 million upgrade at the store that started around six years ago.

DiGiacomo declined to provide details on what will be changed during the renovation at this point, saying only: “It is going to be dramatic and I believe it will position us as the number-one destination for men’s wear in North America.”