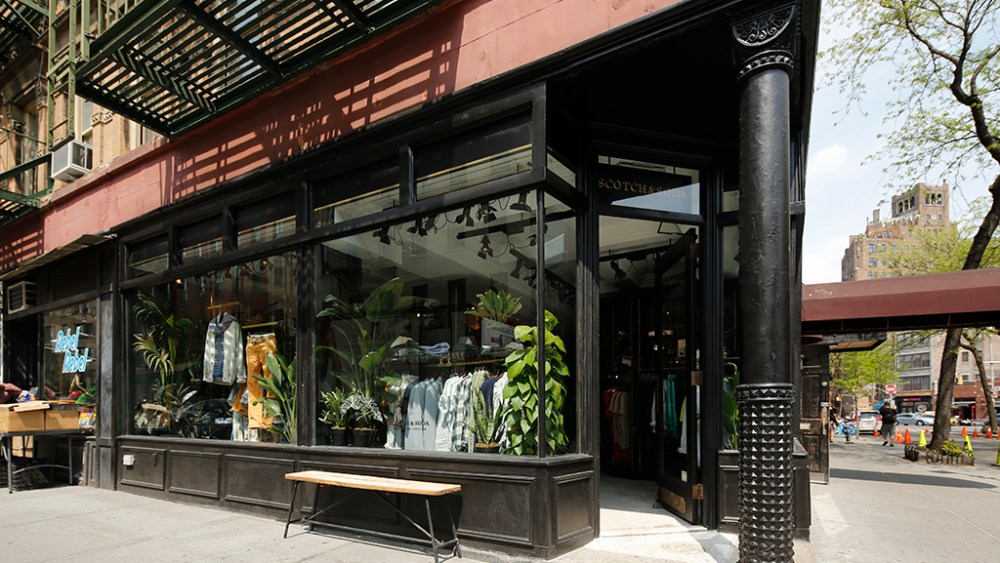 The Amsterdam-based casual sportswear brand has opened its third unit in the city, an 1,100-square-foot boutique on the corner of Bleecker and Grove Streets in Greenwich Village.

The store is in the heart of the neighborhood’s historical district, so much of the original architecture was retained, including a cast-iron pillar outside the front door, mosaic tile floors, vaulted ceilings and a painted white brick wall in the rear. It has more than 30 feet of frontage on Bleecker, as well as a second entrance on Grove Street.

The shop offers both men’s and women’s apparel and accessories and the mix ranges from colorful patterned chinos and washed cotton shirts to the brand’s signature Blauw jeans. Scotch & Soda’s slogan is “Amsterdam Couture,” reflecting the company’s heritage.

Scotch & Soda was acquired by Sun Capital Partners Inc. in 2011, and it was originally planned to operate under the company’s Kellwood Co. division. But Sun Capital rethought that decision and today, it is a stand-alone business headquartered in the Dutch city.

The brand is more than 60 percent men’s wear with women’s and a small children’s collection making up the remainder. It operates 160 stores around the world, including 21 in the U.S. It is known for its fit, detailing and lively prints and patterns. All chinos are sold with belts and sport coats come with complementary pocket squares. Some women’s blouses have necklaces attached to them. Prices are moderate with pants retailing for $115 to $150 and jeans for $145 to $250.

In New York, the company’s retail strategy is a “cluster approach,” according to a company executive who declined to be quoted. Its other two units are in SoHo and Union Square and the brand is looking for additional space in Manhattan and Brooklyn. There are also three stores in Miami.
Scotch & Soda generally chooses major cities for its stores — other units are in Boston, Chicago, Dallas, Seattle, San Francisco and Los Angeles. Because the U.S. represents only around 10 percent of the brand’s overall business, the company believes there is plenty of opportunity for expansion.

In September, the brand named apparel industry veteran Ari Hoffman, whose background includes Gant and Benetton, to serve as chief executive officer of Scotch & Soda USA. He is expected to oversee a significant rollout of the label in the American market.
The Bleecker Street store is the first to open here since Hoffman’s appointment. It had a soft opening at the end of April and its official grand opening will be Thursday.