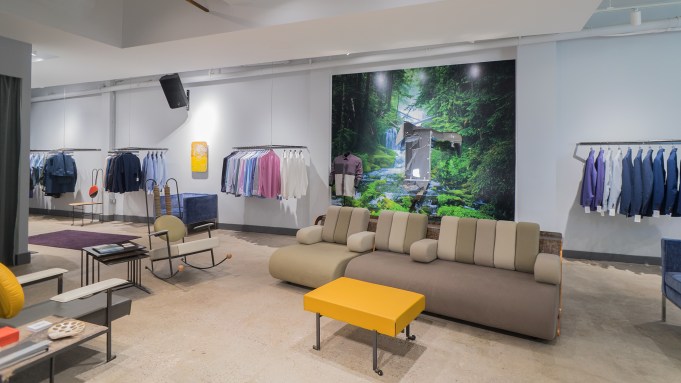 NEW YORK — James and Gwendolyn Jurney have always avoided the beaten path. From the hard-to-pronounce name of their retail store — Seize sur Vingt — to their art installations and insider-y parties, the couple has found a formula that has worked for nearly two decades.

Now they’ve come up with a novel operating model intended to push the store into the next stage of its life.

After their landlord sought to significantly raise the rent of their longtime home on Greene Street, the Jurneys jumped to a new spot at 198 Bowery here.

But rather than relocating Seize sur Vingt, they created a new concept under the name of Groupe they’re promoting as “the first genuine and sustainable platform that connects independent, emerging and aspiring designers to a community of early adopters who are looking for more meaning in the things they wear.”

What that means is that the couple is bankrolling a couple of emerging designers to create capsule collections that are distinct yet complementary to Seize sur Vingt men’s bespoke tailored clothing and furnishings. Initially these designers — who include Jon-Paul Rodriguez, Isabella Spataro, Adi Mucktar-Barnes, Luke McCann and Katya Guseva — are creating two brands developed by the Jurneys that are being sold in the store. The plan is to expand into other categories in the future.

The first two labels are Troglodyte Homunculus, a sportswear brand targeted to the country boy in the city, and United Boroughs, which has a utilitarian bent.

James Jurney explained that from 2005 to 2008, they had operated a similar incubator project at their original Seize sur Vingt store in NoLIta. “It was a fun experiment,” he said.

Over the years, the Jurneys themselves had dabbled in creating other categories such as sneakers, but nothing really stuck. “We’re better producers than designers,” James admitted, “and we believe young people deserve a break and a voice. So we recruited full-time and freelance designers who had incredible fresh ideas.”

Since Seize sur Vingt has been in business since 1998, they have longstanding relationships with factories and fabric mills that they’re tapping to produce the labels. “We’re just increasing our orders,” he said.

But rather than expand under the Seize sur Vingt name, which they believe is “sacrosanct,” they opted to launch brands “and create a new vision.” As for the designers, one is a recent Parsons The New School graduate who they found at the last Project show while another is fresh out of the Fashion Institute of Technology.

If customers are attracted to their brands, James said the labels will be expanded and the designers will gain equity in them. “That’s appealing to everyone,” he said.

The Jurneys have created a web site in addition to the store, which sports the Groupe name on the outside along with its three labels: Seize sur Vingt, Troglodyte Homunculus and United Boroughs.

Inside, they have worked to create an “immersive, engaging experience,” James said, which includes a design lab, conference room, fabric library and rotating art gallery.

The Jurneys said in the future, they’d like to expand this incubator concept to other categories including accessories, women’s wear and shoes, as well as to other cities. If Groupe were to open in Los Angeles or London, the Jurneys said they would work to find local designers to create brands that reflect those cities.

“We hope we can keep building this,” he said.