The Hall of Fame NBA player and J.C. Penney big and tall style ambassador also unveiled the winners of a model search.

NEW YORK — Shaquille O’Neal is a champion of the big guy.

The retired NBA star, who played for the Magic, Lakers, Celtics, Heat, Suns and Cavaliers during his 19-year Hall of Fame career, is now a sports analyst for “Inside the NBA” on TNT, an actor, real estate developer and businessman.

But it was in his role as the big and tall style ambassador for J.C. Penney that brought O’Neal to New York Monday night. He’s had a collection of big and tall men’s wear with the retailer, called Shaquille O’Neal XLG, for just under a year, and this spring, partnered with the store and Wilhelmina modeling agency to host a model search. The three winners — Chukwukere “A.K.” Ekeh, Ricardo “Ricky” Vichot and Jordan Alexander “Alex” Cochran — are featured in the Penney’s fall campaign for the collection and have been signed to Wilhelmina’s Titan division of big and tall models.

Prior to a panel discussion, O’Neal sat down with WWD to discuss what it’s like finding clothes when you’re 7-feet, 1-inch, 325 pounds, how he thinks the Reebok brand has been diluted since being owned by Adidas, and his distaste for NBA “super teams.”

Shaquille O’Neal: I wear them all the time. It’s actually all I wear. It feels good because I had to break out of the box and say, “I’m not going to wear what the stores offer us big guys.” I always had to get a professional tailor, but with J.C. Penney, we sell funky blazers and slacks and nice shirts and sportswear — things the big guys can be proud of.

WWD: Right now, it’s just suits and furnishings, how do you see the line expanding?

S.O.: More sportswear, underwear, tank tops, children’s — and eventually ladies’ shoes because I have three daughters who are very upset with me. They say I don’t make “girl Shaq” shoes. But everything has to be done right. There’s definitely a market for big and tall guys who want to feel and dress sexy. I know that for a fact. Every DXL or Rochester store I went to had nothing. And when they did, it was $600. I wanted to do something that the average man can afford. There are more real workers than there are spoiled brats like me.

WWD: You don’t like that big guys have a hard time finding clothes.

S.O.: Nobody should have to pay $1,000 for a suit, even though I did because I could. For the draft, my suit cost $10,000 from Rochester Big & Tall. I was also picking one up for my dad and he said, “I don’t want that, I’ll just wear my military uniform.” That kind of hurt me. So when I started working with J.C. Penney, I said I only want to give people great stuff at an affordable price. I’m a big guy, but I don’t want to look like a big guy. I want to look like a sexy Tom Cruise-looking guy.

WWD: Why did you want to host a modeling contest?

S.O.: We decided to give big guys an opportunity to be models, represent the line and showcase their talents. We picked three guys. I wish there could have been more. When I first started this, I thought the big guys were going to be shy. But when I did [the open casting call] in Atlanta, I was scheduled to be there from 6 to 8 and I ended up being there until midnight. There were 1,000 guys. There were a lot of beautiful big men out there and I think we broke them out of their shell. 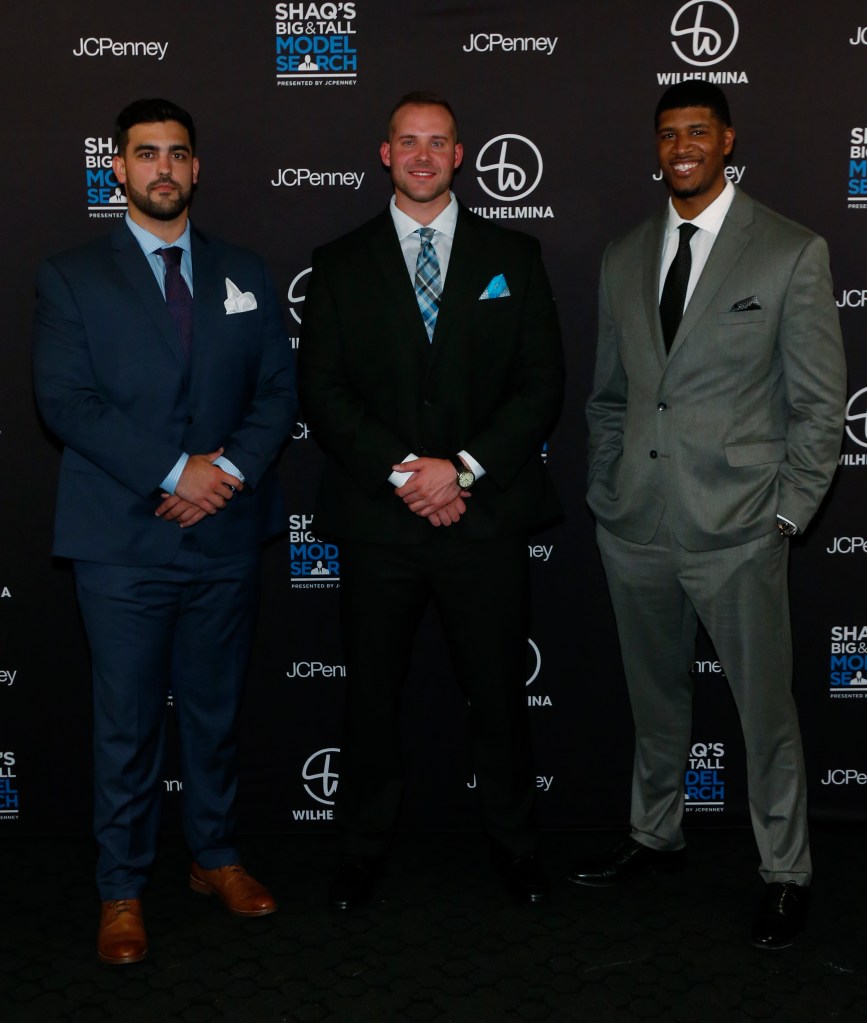 WWD: You’ve made a few controversial statements lately, including your desire to buy Reebok back from Adidas since you don’t think they’re managing it properly.

S.O.: I’m very serious and he’s the guy. I’m his partner, so if he goes with it, I definitely want to do it. That’s what Jamie does, he buys brands and revitalizes them. I made the statement because I remember when Reebok was really close to Nike. My thing is, if you don’t want it, Mr. Adidas, sell it to Jamie Salter so we can do something with it. I know Reebok still has a big fan base and they’re very successful in the women’s department and the athletic department. I went to Reebok a couple of months ago and they told me they were selling their building. It broke my heart because the Reebok campus is really sentimental to me. I remember when I went up there and they showed me around and said, “We want to give you your own shoe.” Reebok has done a lot for me, so if I can be the guy to bring them back, it would be a hell of a success story. But I can’t do it without the Salter clan.

WWD: You’ve also talked about your dislike of the “super teams” in the NBA where superstar players are all stacked together on one team.

S.O.: Growing up, what made sports interesting were the highs and the lows. Larry Bird [who played 13 seasons for the Celtics] and them just beat the Lakers. Me being a Lakers fan and my parents being Celtics fans, that put a little [dent] in our relationship, but it went back and forth. Imagine if Bird had said, “OK, every time the Lakers beat us, I’ll go play with Magic.” That’s not what competition is all about. There’s so much pressure on these guys, they just want to make it easier. Now if it’s the general managers that create a team, I’m fine with that. But guys teaming up and wanting to play together, that’s not something I would do. I didn’t take the easy route. I could have gone and played with Michael Jordan. I could have played with Patrick Ewing. I’m from San Antonio, I could have played with the Spurs, but I’d rather beat those guys. I won so much money going into the barber shop saying, “Who was the last guy to beat Michael Jordan in the playoff series?” Me, only me. I actually feel good about that. It’s bragging rights, rather than just teaming up with someone. I feel good having earned my Hall of Fame spot.

WWD: How do you think the Lakers will do this year?

S.O.: I think they’ll do OK, but in Laker land, we don’t want to just win games, we want to win championships. I also want the Sacramento Kings to win, I’m a part owner of that team, so I want them to win before I want the Lakers to win.

Adidas Reports Healthy Progress for First Half of 2019

J.C. Penney Reinvents With the Help of Resale