Slightly Alabama Branches Out Into Apparel With Cockpit Collab

The artisan leather goods brands has created a motorcycle vest and hunting jacket for its Bleecker Street store and online.

Like it or not, Dana Glaeser is now a retailer.

On Tuesday night, the founder of the Slightly Alabama artisan leather goods brand celebrated the one-year anniversary of the opening of his retail store at 350 Bleecker Street in Greenwich Village.

The location was initially part of the Love, Bleecker program conceived by Brookfield Property Group last year to help revitalize the street. The real estate developer acquired seven retail spaces and negotiated with several brands to open stores there as a way to position the street as a place to once again find art, commerce and culture.

Slightly Alabama was one of them, taking over a 2,200-square-foot space and filling it with not only its own upscale leather products, but also a selection of similarly minded men’s brands including Cockpit, Freenote Cloth, Krammer & Stoudt and more.

The success of the concept prompted Glaeser to relocate his workshop from Brooklyn and set up shop at the back of the store permanently, even though he has now transitioned to a more-traditional rent structure with Brookfield as his landlord.

During the year anniversary event, Glaeser also showcased his first apparel collaboration, a leather motorcycle vest co-branded with Cockpit. A country gentleman’s jacket is in the works and he hopes to continue to expand the partnership in the future.

“Since we opened the store, we realized we’re a brand, not just a leather goods designer,” he said. Admitting that he “knew nothing about clothing,” he tapped the expertise of Cockpit’s team, led by founder and executive vice president Jacky Clyman, and its head of marketing Rudy Gonzales. “I thought it would be cool to do an outerwear pieces,” he said.

So he worked with the Cockpit team to tweak its vest and give it more of a “motorcycle aesthetic,” complete with a zipper that is shorter so a rider can comfortably bend over, an extra-long iPhone pocket, a slit to hold glasses in that same pocket, a mock collar to accommodate a denim jacket underneath and an interior lining that unzips so the wearer can sew on patches without having to go through the lining as well. The vest retails for $498. 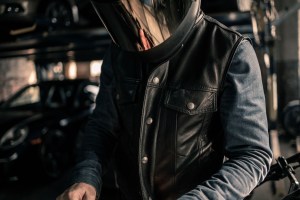 The co-branded vest was specifically tweaked for a motorcycle enthusiast.

As for the country gentleman’s hunting jacket, Glaeser has tweaked the style to give it more of a “worldly Southern gentleman’s” aesthetic. It is available in a wide wale corduroy and has a thicker quilted lining, large pockets and a barnstormer-style collar. There is leather on the undercollar. “It’s not as precious as a sport coat, but more utility,” he said.

The launch is being supported by a social media and in-store campaign featuring Glaeser riding his motorcycle in the city and upstate. It will be available at the shop as well as on both brands’ web sites.

He said the initial run with Cockpit is limited as he determines demand. “But we would like it to be a staple piece that we can add to,”  he said, adding that the store is a “good testing ground.”

The Slightly Alabama store carries around 40 brands, including Cockpit, which has been a consistent bestseller, and includes an eclectic assortment that ranges from jewelry and candles to vintage albums and autographed first-edition books.

Slightly Alabama is one of several men’s — or men’s dominant — boutiques that have found success on a reinvented Bleecker Street. While there are still plenty of empty storefronts, additions include Goodlife, which opened its first store on Tuesday night, as well as Huckberry, Grayers, Naadam, Faherty, Marine Layer and Buck Mason.