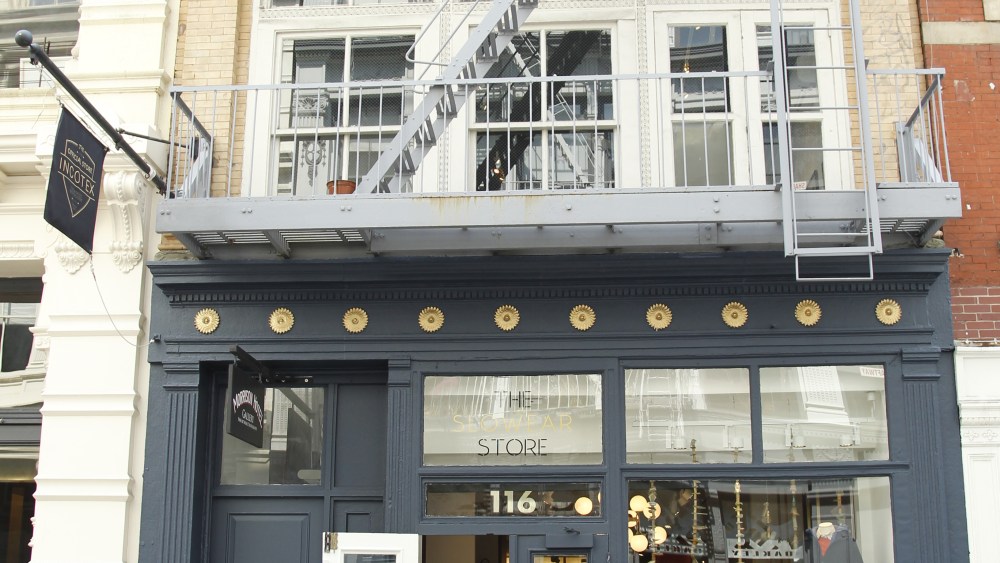 The name of the company may be Slowear, but its approach to expansion is anything but tortoiselike.

The Venice-based luxury men’s wear manufacturer has opened 22 stores around the world over the past eight years in such gateway cities as Paris and Tokyo. Ten are owned by the company and the remainder are franchised.

Even so, directly owned retail represents only around 15 percent of Slowear’s sales, which were 52 million euros, or $58.5 million at current exchange, last year. But the plan over the next five years is to increase that number to 50 percent, according to Roberto Compagno, chief executive officer and son of Carlo Compagno, who founded the company in 1951.

The store, which had a soft opening last week, is one of several that Slowear hopes to open in the U.S. over the next several years.

“We’d like to open more stores if this one is good,” Compagno said. “Another couple in New York first, then we would look at other cities such as Miami or Chicago.”

He said New York is so big, Slowear can easily add another one or two locations uptown without flooding the market. “We like locations where there are residences,” he said. “But we want to see the reaction in the market first. New York is not easy, but we hope to stimulate the consumer.”

The store carries multiple apparel brands, but they’re all owned and operated by Slowear. That includes Incotex trousers, its first and largest label, that still accounts for 40 percent of overall sales and 70 percent of its wholesale business, as well as its sister labels.

Over the past decade, the company branched out into other categories by acquiring Zanone knitwear, Glanshirt shirtmakers and Montedoro outerwear and accessories that it brought together under the Slowear umbrella in 2003. Those brands are all well represented in the SoHo store, along with some small independent items in grooming and cosmetics, cufflinks, headphones and small leather goods. There is also a series of products under the Officina Slowear banner, an initiative the company hosts in the Venice area to support small artisanal producers in shoes, small leather goods and jewelry.

The focus on retail is designed to replace some of the volume lost when Slowear exited the private-label manufacturing business.

“We made this decision about 10 years ago,” he said. “It has been quite a long process. We were born as a manufacturer of pants and for 50 years we were dedicated to this business with factories in Italy and Europe. We kept growing with licensees and we ended up producing one million pairs of pants a year. At a certain point, we realized that this business was changing, the competition coming from the Far East was increasing and the margins were reducing. We started thinking that the future of our business might be in the retail business.”

The decision to move away from producing for brands such as Burberry and Ermenegildo Zegna caused sales to take a hit. “In our most successful years, we used to generate 35 million euros [$39 million] through licensees and between 30 million and 25 million euros [$34 million $28 million] with our own brands,” he said. “We still don’t have the same volume, but we are on the right path. We have to continue pushing the wholesale business and focus on the international markets.”

In 2012, he said, Italy accounted for 70 percent of the business; now it represents about 30 percent, with Japan surpassing it as the largest market for the company. The U.S. represents about 15 percent of total sales and the brands are carried in 180 doors including Neiman Marcus, Barneys New York, Saks Fifth Avenue and Bergdorf Goodman.

“We know America very well,” he said. “We’ve been there for 15 or 18 years, mainly with our trousers. We’ve been developing our business in other parts of the world. But now we will see if America likes us.”

The SoHo store is a personal labor of love for Compagno. The tile floor in the center is from an Italian company that produced it in the Fifties but never sold it. The furniture is also vintage European. “We love American style, but also wanted the show the spirit of our heritage,” he said.

That will be the case in all the stores the company adds going forward — Compagno said the company hopes to open around three stores a year. “We have the right team now, and we know how it works. We have a lot of practice so we can accelerate the process.

“We believe in this project,” he said of the company’s retail rollout, “so we’re investing a lot in it.”