Designer Chris Stamp adhered to his signature black-and-white palette in a minimalist space that blends art and elevated streetwear. 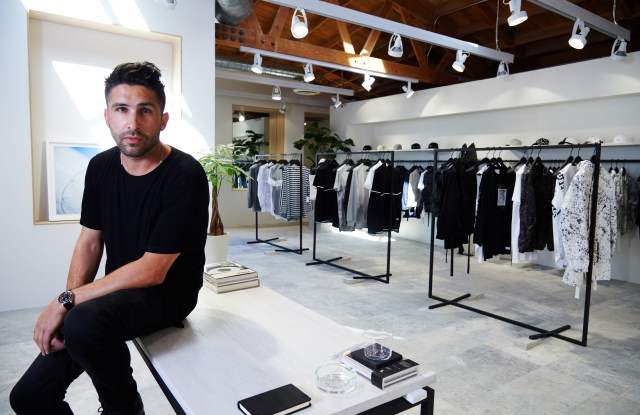 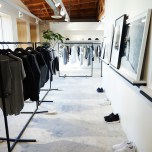 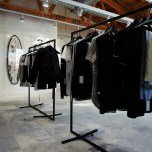 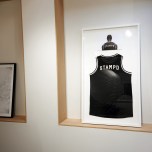 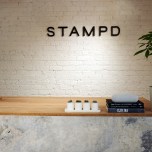 The reputation of La Brea Avenue as an epicenter for men’s fashion in Los Angeles has received one more affirmation with the opening of Stampd’s first store.

On the one-block stretch between First and Second Streets, tucked between Union and American Rag Cie and across the busy thoroughfare from Aether, Stone Island and Bonobos, Stampd’s second-floor shop is a study in black-and-white minimalism that blends art and elevated streetwear. It’s hard to picture that before the official opening on April 9, the space was once an acting studio enshrouded by black walls and floors and darkened by spray-painted skylights so the teachers could better control the environment for their emoting students.

Working with Brooklyn, N.Y.-based design firm Snarkitecture, Stampd founder Chris Stamp adhered to the monochromatic palette that identified his designs from the very first collection back in 2012. Custom surfboards made by Futura for $20,000 a pop stick to the black-and-white color scheme, as do limited-edition photographs by Adri Law, David Grr and artist LA, and a neon sign that reiterates the logo from Stamp’s ongoing Puma collaboration: “made to make it.”

Stamp lightened the ambience of the 1,400-square-foot store with matte floor tiles cut from silver Turkish travertine, tables carved out of washed white oak and crates etched out of Carrera marble. Blackened steel used for the racks and table legs added a dark contrast. In some cases, he combined all three elements: a travertine wedge is jammed under one white oak shelf and similar hinges are found under the bases of steel racks and a large mirror resting on the floor.

“I’d been looking for a space in Los Angeles for a year and a half,” Stamp said in a preview of the space on Friday morning. Obvious candidates he considered were the aspirational enclave of Melrose Place and the hipster haven of Abbot Kinney. “I think the biggest challenge was finding a space that was inspiring.”

For his own inspiration, Stamp referred to the aesthetics of his two favorite cities, Tokyo and Copenhagen. Already thinking of where he’d want to open future stores for his company, which brings in annual sales of less than $20 million, he said it’s not far-fetched to hang a Stampd shingle in the capitals of Japan and Denmark. “I’m open,” he said. “Things are changing.”

The rapid movements in the men’s apparel industry helped him, an Aspen-born graphic designer with no fashion connections except for a mother who designed bags for brands like Guess, to start his company five years ago. The 32-year-old joins the men’s streetwear revival advanced by buzzworthy brands such as Fear of God and Second/Layer that were started by designers with no formal fashion training.

“It’s a different perspective,” Stamp said, adding that he’s friends with many of the other streetwear designers. “Things are changing so much with the Internet. [Consumers] have access to information so quickly and so do we.” Plus, he cherishes his untraditional entry into fashion. “From the get-go, I wanted to do something different. No one has done the same path.”

He’s not excluding women from that equation. Aware that female shoppers have scooped up hats and T-shirts sized XS and S since the brand’s inception, Stamp offered a capsule collection for women last fall on his e-commerce site. While his goal is to eventually produce a women’s line, he wants to ensure that his company has strengthened its backbone first.

Until then, he’s fleshing out the Stampd lifestyle with co-branded paintbrushes by German’s da Vinci, furniture made by Snarkitecture and cookbooks from restaurants such as Noma and Gjelina — all of which will be for sale in the store. He aims to fill roughly 25 percent of the stock in his store with exclusive items, such as a $78 long-sleeved T-shirt that is printed with the address of the business, the geological composition of the rocks under it and a map of the area.

“One of the reasons I wanted to do a store was to connect one on one with a customer,” Stamp said, noting that, for the first 18 months in business before it started wholesaling to United Arrows and Colette, Stampd sold only on its own Web site. “That’s always been the emphasis — what our customer wants and what they’re looking for.”