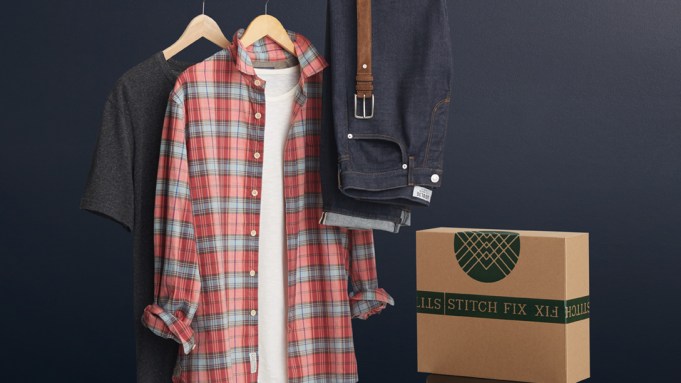 Men can now get their Stitch Fix, too.

The online styling service is expanding into the men’s market today, offering brands such as DL1961 and Scotch and Soda as well as an in-house brand, Hawker Rye, which is expected to be joined by other private brands. (Hawker Rye amounts to Stitch Fix’s take on modern American sportswear, with washed shirts and chinos).

In all, the men’s offering of apparel, footwear and furnishings will include more than 50 brands, from Threads for Thought and Descendants of Thieves to AG and Seven For All Mankind with prices for the men’s offering ranging from $28 to $178.

Since Katrina Lake founded the San Francisco company as a data-powered digital styling service in 2011, it has grown to more than 5,000 employees, including 3,000 stylists across the country and 70 data scientists. The service offers 200 women’s brands, covering petites, accessories, maternity and footwear and has plans to offer plus-sizes early 2017.

The firm’s c-suite has also been growing, with Julie Bornstein, who previously oversaw Nordstrom and Sephora’s moves into the digital realm, joining as chief operating officer.

Bornstein said many of the elements that helped grow and strengthen the women’s side of Stitch Fix’s business are now informing the launch into men’s — an area considerably less saturated than the women’s segment.

“There are fewer players out there,” Bornstein said of the men’s market. “So there is a higher potential value and, I believe, there can be higher penetration.”

She said more than one-third of Stitch Fix’s female clients spend over half of their apparel wallet share with the company. (Although Stitch Fix doesn’t share its revenues or how many customers it has, the company has shipped more than one million “fixes” since it was founded.)

The Stitch Fix men’s service will mirror the women’s side of the business — men sign up online to share size, budget and style preferences. A personal stylist sends five items and the shopper can buy what he wants and send back the rest. The $20 fee for each “fix” goes toward the purchase of any pieces, and shipping is free both ways. The stylists do not make a commission but are paid hourly.

“When Katrina explained the concept, I thought that we could understand the customer like no other retailer,” said Mike Smith, general manager of Stitch Fix Men. Smith came to the company from walmart.com, where, he said, “We thought we had all the data in the world, but we knew very little about the customer — we knew about transactions.”

Stitch Fix spent a year researching the men’s expansion and began a beta test with a few thousand customers in March.

“To men, a brand equals quality, which equals fit,” Smith said. “The men in our beta service said that fit is their number-one apparel concern.”

He added that men liked the discovery aspect and tended to be more interested in understanding the technical aspects of clothing. “We knew that women have fun, and we didn’t know if a guy would have fun the same way,” Smith said. “But he’s having a lot of fun discovering brands and having a stylist.”

“He is very explicit [about his feedback] and funny, in a charming, personal way,” Phillips said.

Sizes Stitch Fix Men will range from XS through XXL, covering waist sizes 28 to 42, and inseams 30, 32 and 34. Rather than target one demographic, by age or style, each “fix” is tailored for individuals, although men in the beta test gravitated toward “modern casual” and were is looking to appear more polished. After beta shoppers were comfortable with the service and sure the fit was dialed in, some wanted a favorite piece in every color.

“Men have said, ‘This is going to replace all my shopping,’” Smith said.