Ceo Fokke de Jong said this model will not replace Suitsupply's plans to continue to add to its store base.

A Suitsupply campaign image for fall.

Suitsupply is partnering with Nordstrom on a multicity strategy that will find the Amsterdam-based company opening shops within several Nordstrom units in North America this fall.

The concession shops will be in the Pacific Centre store in Vancouver, British Columbia; Eaton Centre and Yorkdale Shopping Centre in Toronto; Del Amo Fashion Center in Torrance, Calif., and Oakbrook Center in Oakbrook, Ill. Suitsupply will also be available at Nordstrom online.

Fokke de Jong, founder and chief executive officer, said he had been speaking to Nordstrom for “a long time” to see how the two companies could partner. Now with the remodeling that has been done in the men’s stores, Suitsupply was finally able to find appropriate space to build and open shops. “It was just a matter of finding the right model and space.”

The shops generally measure between 800 and 1,000 square feet and are staffed by Suitsupply employees; there are also tailors on site in each unit to handle alterations. The shops will also offer a full custom-made option.

“From a department store point of view,” de Jong said, “Nordstrom is very customer service-focused and runs their business like we run our freestanding stores. There’s a very mutual approach to the business.”

But what is different is the customer.

“Our vision was missing in their offering,” de Jong said, adding that Suitsupply offers a “younger and more updated version of tailored.” The company offers affordably priced tailored clothing and furnishings in a cheery and colorful environment.

He also stressed that opening shops in Nordstrom doesn’t mean that Suitsupply will stop opening stores of its own. 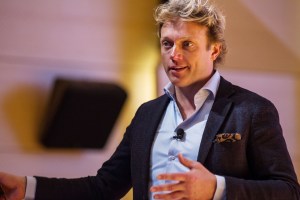 “We’re not chasing a department store concession strategy,” he said. “We can do both. It’s a tide that raises both ships.” He said Suitsupply already operates stores in Toronto and Montreal and just opened a unit in Hudson Yards in New York as well as another in Minneapolis. “One doesn’t exclude the other. The shops actually help our freestanding stores. They’re not a substitute.”

He said that if they are successful, however, he would consider adding other shops in Nordstrom units.

Turning to Hudson Yards, which is Suitsupply’s sixth store in New York, de Jong said sales have been strong since the opening of the 5,900-square-foot store last week. “We were surprised, we thought it would take some time,” he said. “But we hit the ground running and the revenue and audience is there. Like all new centers, we always take a cautious approach and we know we can generate our own traffic, but this is a really good center.”

The privately held Suitsupply now operates 125 stores around the world, in cities including Milan, London, Shanghai and Hong Kong. De Jong founded the company 19 years ago out of a trunk when he was in college and in the beginning it was strictly online, but de Jong soon realized that men preferred to buy suits in a brick-and-mortar location.

De Jong said business today is “pretty good” as Suitsupply benefits from a movement away from streetwear to a more tailored aesthetic. “We’re really feeling that momentum,” he said. “We’re happy campers.”