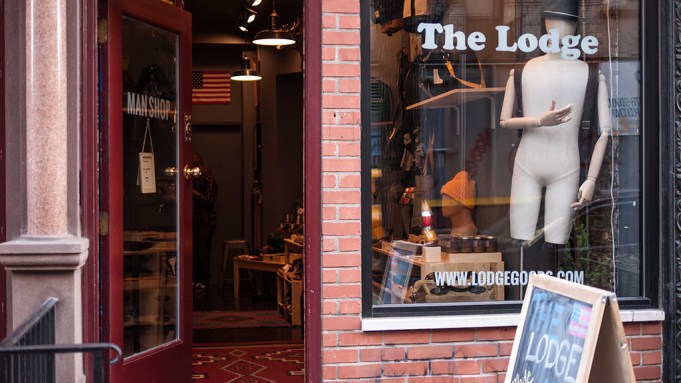 NEW YORK — Browsing through The Lodge is like going on a treasure hunt.

The tiny East Village boutique owned by apparel industry veteran Chad Beightol features a unique and eclectic mix of accessories all manufactured in America. The brands are artisanal, not widely distributed and rank high on the craftsmanship scale. Among the offerings are leather goods from California-based Coronado Leather, pocket knives from Santa Fe Stoneworks and neckwear from General Knot & Co.

The store at 220 East 10th Street between First and Second Avenues, opened quietly around the holidays and joins Odin, Cadet and Fair Folks & a Goat, a women’s wear store, in the bustling neighborhood.

The idea for The Lodge, which Beightol refers to as “a man shop” for its male-oriented aesthetic, got its start as an e-commerce play in the spring of 2013. The Web site, lodgegoods.com, helped Beightol “test, learn and understand the market,” he said.

He dipped his toe into brick and mortar with pop-ups in Brooklyn, Manhattan and Boston before opening the 300-square-foot location at the end of last year. “We saw traction with the pop-ups and saw that the customer likes to discover things,” he said. All of the brands offered have an interesting backstory and an authenticity that today’s shopper appreciates, he added.

“Online it sounded like a one-way conversation,” he said.

Beightol got his start in the retail business as a child, working at his family’s furniture factory. From there, he joined Saks Fifth Avenue, Levi’s and Coach where his background revolved around merchandising and product development.

Those jobs required a lot of travel and it was in other parts of the world that Beightol saw first-hand how interested men were in fashion and accessories, particularly American brands. But he was disappointed to find that many brands that tout their American heritage were actually being made overseas. Couple that with his family’s business having to close in the mid-Nineties amid struggles manufacturing in the U.S., and Beightol was determined to do what he could to support the brands that still chose to make their products here.

“I was in Japan discovering American brands I’d never seen,” he said. “So I saw an opportunity to support American makers.”

General Knot’s ties are manufactured in Bedford, N.Y., from vintage fabrics and are individually numbered. They retail for $88 to $150. There are socks from Philadelphia’s American Trench; backpacks from Kletterwerks in Bozeman, Mont.; watches, both vintage and new, from Throne in Brooklyn, and glasses from Capital Sunglasses in San Francisco that retail for $135 to $145. The Santa Fe Stoneworks knives are “art pieces,” he said, and are made from unique materials including wooly mammoth tooth bones, retailing for $110. There’s also a selection of grooming products from Baxter of California, Fellow Barber and Imperial Barber.

‘These are things we think guys should have,” he said.

So how did Beightol find all of these brands? “Google is a great resource if you’re willing to scroll through 20 pages,” he said with a laugh. “And our customers will also recommend things that they’ve found.”

The Lodge’s most popular brand is San Diego’s Coronado Leather bags. “They’re on par with the luxury brands from Europe, but a briefcase is $450.”

Long term, Beighol said he’d like to open more small shops in cities such as Boston and also increase the editorial content on his Web site to better tell the stories of these American-made brands that have become so popular with shoppers, both here and overseas.

“A quarter of our business is outside the U.S.,” he said, “Japan, South Korea, Singapore, Australia, the U.K., France and Canada.

“It’s like buying organic fruits and vegetables 10 years ago,” he added. “They were hard to find and more expensive then, but not anymore. Consumers today are really asking for American-made.”