Thom Browne is teaming up with the Joyce Group to open a flagship in Hong Kong. 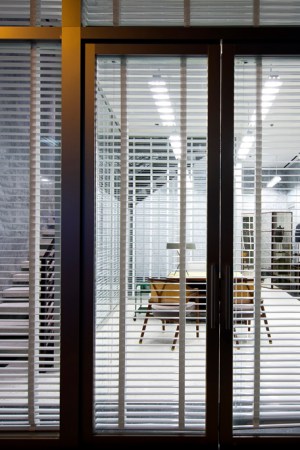 Thom Browne is teaming up with the Joyce Group to open a flagship in Hong Kong.

The 1,700-square-foot store — the designer’s first in China — opens today on On Lan Street, the city’s fashion hub.

The boutique was designed by Browne in collaboration with Studio Mellone and is reminiscent of the designer’s first store in New York City. The Hong Kong unit is three floors and features a glass “box” enclosed staircase covered with white blinds that weave back and forth.

It is designed to look like an office from the late Fifties or early Sixties with poured terrazzo floors, gray marble walls, simple fluorescent lighting and continental midcentury furniture by Paul McCobb, Edward Wormley and Pierre Jeanneret. The ground floor has a lobbylike feel and will have almost no merchandise. Instead, it will house a small lounge with a Gio Ponti-style bar and stools. The full range of Browne’s men’s collection, including shoes and accessories, will be carried on the other floors.

Andrew Keith, president of Joyce Group, said, “We have carried his collections in our Joyce multibrand boutiques since early on in his career, and over the years we have seen the brand growing tremendously, along with its customer base. We see a huge potential for its further growth in Asia and we look forward to a great future together.”

Browne said Joyce “has been very supportive of me and my collection from the very beginning, so it was a natural choice to partner with them to open my boutique in Hong Kong.”

A spokeswoman from Joyce said the company is still in discussions with Browne about opening additional stores in China, but nothing is confirmed. It holds a license to occupy the Lan Street unit, a Thom Browne spokeswoman said.

Thom Browne operates a flagship in TriBeCa as well as a store in Tokyo.