The designer created a sports-inspired collection for the retailer's rotating Concepts pop-up shop.

The Thom Browne locker room at the Nordstrom men’s store.

The Thom Browne locker room has just opened at the Nordstrom men’s store.

This morning, the designer and the retailer took the wraps off Concepts 009, the latest iteration of Nordstrom’s rotating pop-up program. It features more than 30 pieces designed by Browne that are exclusive to the retailer, many of which have a sporty edge. So in addition to the designer’s trademark skinny suits, there are also yoga mats, sneakers and stainless steel water bottles.

“A lot of the Nordstrom customers are new for me, so I wanted to give them the breadth of what I do,” the designer said of the items he designed for the shop. “And I wanted to do things that were not as expected.” So the range includes everything from tailored pieces to sportswear along with more “utilitarian” items.

He said the merchandise mix — as well as the locker room shop he created to house it — are intended to “feel like a real guy’s world.”

Browne, who has been increasing his participation with various sports teams of late, said he’s “always used sports as inspiration” for his collection but some of the references are “more overt” than others.

He said he’s become friendly with some professional athletes and they have proven to “be the most inspirational people for me.” In addition, sports references are “very familiar” to most men and “are a good introductory point” for his brand.

In 2018, Browne inked a three-year deal with FC Barcelona to become the official provider of the team’s off-field tailored and formal wear uniforms. That same year during the NBA Playoffs, Browne spearheaded a big fashion moment by creating matching custom-tailored looks for the entire Cleveland Cavaliers team, including LeBron James. The designer also created a sports capsule last year for Unknwn, a retail shop in Miami co-owned by the hoops star. 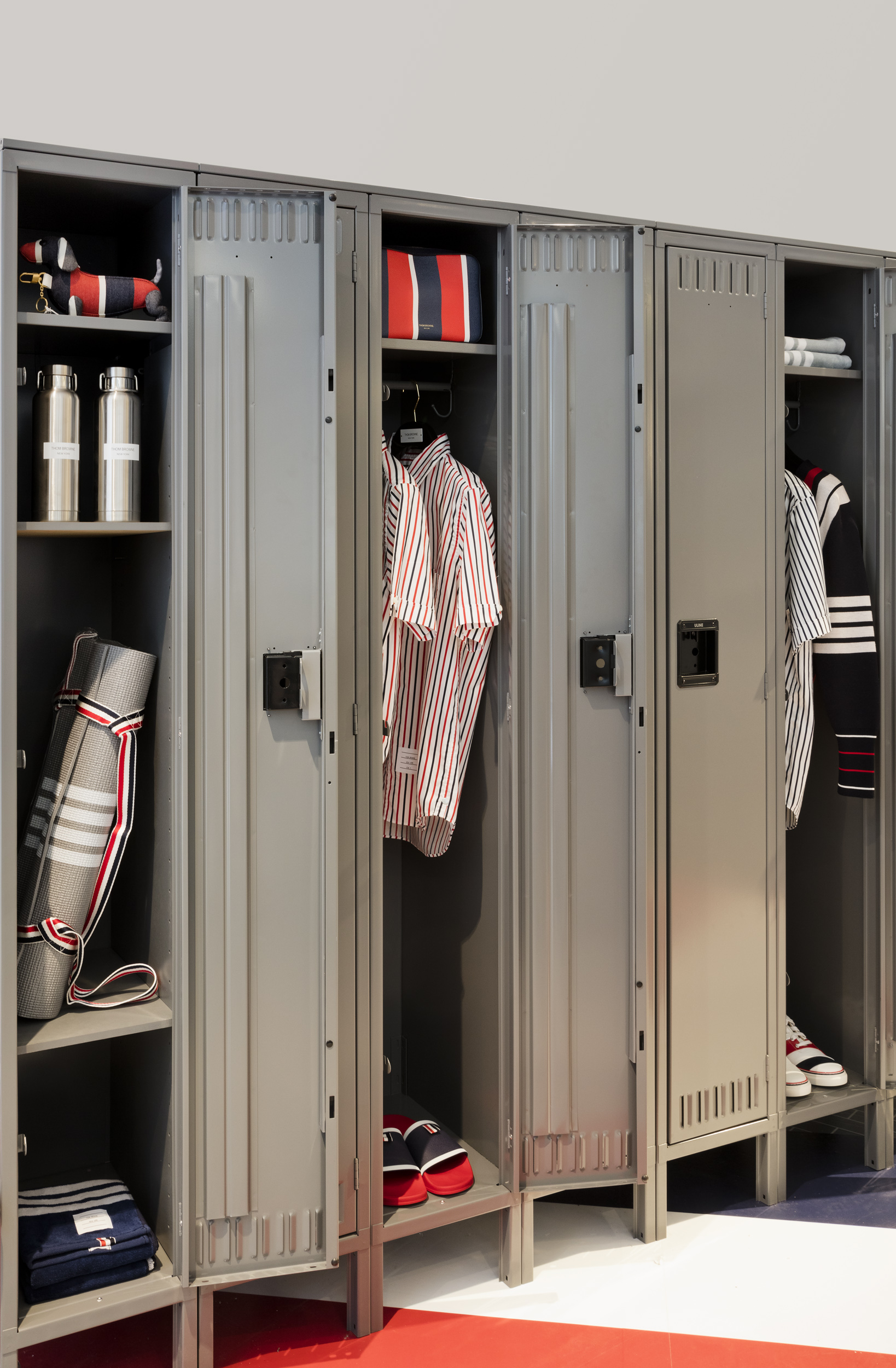 Browne, who swam at Notre Dame and is still a competitive runner, also created a golf capsule for his store in Milan.

“I’ve done a couple of collaborations with retailers in the past that were similar to this,” he said, adding that there could be others in the future. “I’ll do it when the partnership is interesting and I see a real commitment from the other party,” he said. Nordstrom’s other Concepts ideas have included Scott Sternberg’s Entireworld (Concepts 0080), as well as a Union & Co. streetwear pop-up, one with the famed Beams retailer from Tokyo, and a cold-weather shop called Out Cold. “They’re really invested in the idea,” Browne said.

Sam Lobban, vice president of designer ready-to-wear and new concepts for Nordstrom, said he’d been “a massive fan of Thom Browne for a long time.” And when brainstorming on concepts for this year, Lobban sought to engage in a “broader conversation of what happens in a post-streetwear world.” He said men today are interested in historical references and how guys used to dress, “and that plays a lot into what Thom Browne does.”

But to expect them to jump from hoodies and sweats into a tailored suit may be a bit too extreme, he said. So he turned to Browne to offer a fashionable alternative that bridges tailored and sportswear. 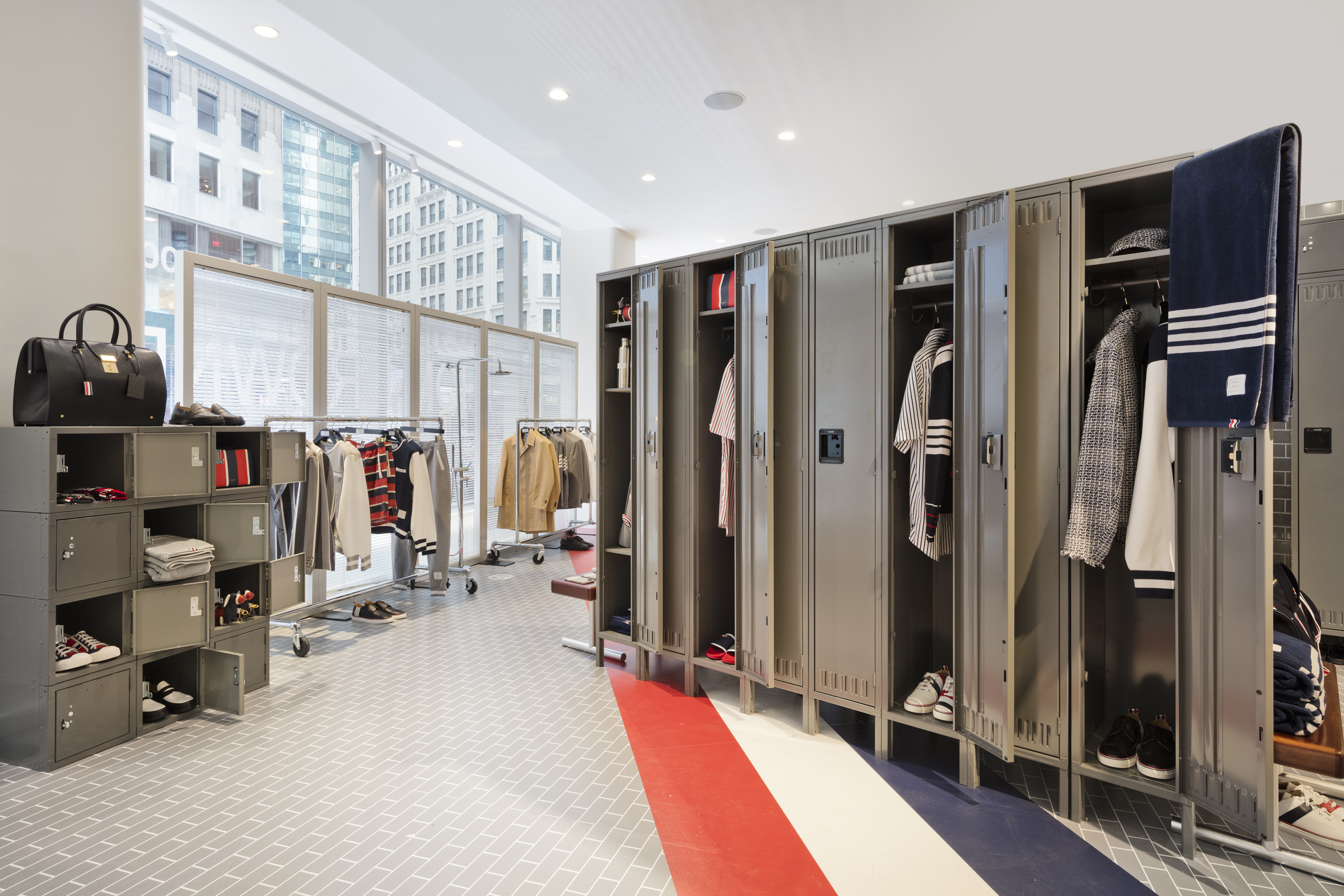 “We took inspiration from Thom’s affection of sports,” Lobban said, but the partners made sure the mix was eclectic and included everything from a “man’s uniform,” the traditional suit, to sneakers, sweatpants, slides and a dopp kit. Prices range from $80 for an iPhone case to $1,790 for a red, white and blue jacket with leather sleeves. The shop offers “locker room references” that include slate gray lockers accented with classic New York City-inspired white subway tiles, Lobban said.

The Concepts 009 shop will also pop up in Seattle, Miami, Los Angeles, Costa Mesa, Calif., Chicago, Dallas and Vancouver for the next eight weeks.

Nordstrom has carried the Thom Browne collection “in a small way,” for the past several years, offering the collection in three doors. But the collection has since been expanded to seven. “We’re scaling up,” Lobban said. “We see a lot of opportunity in the brand.”

In 2018, Ermenegildo Zegna Group bought an 85 percent stake in the Thom Browne business for around $500 million.