The SoHo store carries the line's collection of ready-to-wear in addition to its custom offering. 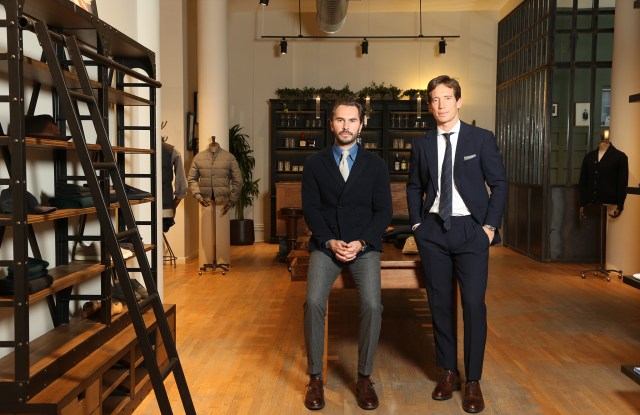 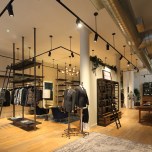 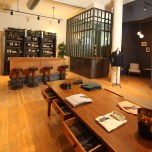 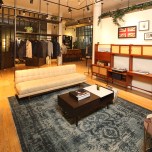 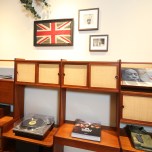 NEW YORK — Thom Sweeney is making a statement with its first U.S. store.

The London-based brand that got its start as a bespoke maker in 2006, today will take the wraps off a 3,000-square-foot store at 362 West Broadway in SoHo — its first unit outside its home country.

The store stocks the brand’s ready-to-wear — which it started producing in 2013 — and has a large room dedicated to fittings for its signature made-to-measure and custom garments. It also features a special cutting room where a U.K.-based cutter will visit once a month to tend to clients along with a bar and lounge areas to encourage customers to stay a while.

“We think it stands out because there’s nothing else in the area like it,” said Thom Whiddett, who founded the brand with Luke Sweeney.

The two men met while they were both working for British tailor Timothy Everest — Whiddett as an apprentice and Sweeney as the head of the made-to-measure department. They decided to team to create the Thom Sweeney label, setting up shop in a small apartment in Mayfair, where they took private orders.

In 2009, they opened a bespoke studio in a former art gallery on Weighhouse Street, followed by a traditional store on Bruton Place in 2014.

Like its name, the Thom Sweeney aesthetic is also a mash-up of classic English and Italian styling that features tighter fits and modern silhouettes with a natural shoulder, generous lapel and higher arm hole that feels comfortable and looks contemporary.

Rather than opening a store elsewhere in Europe, Whiddett and Sweeney decided to take the plunge in New York because they had amassed a large number of clients here. “We were coming here for 10 years doing trunk shows under the radar,” Sweeney said. “So this was a natural progression.”

Upon entering the New York store, the lifestyle collection — everything from dress shirts, neckwear and sweaters to soft sport coats, suede jackets and tuxedos — is front and center. The store added a few third-party brands including Edward Green shoes, CQB sneakers and Globetrotter luggage.

The duo realized a few years ago that there were “plateaus” in tailoring, knowing that customers can only buy so many suits and jackets. “So to grow, we knew we had to dress him from Monday to Sunday, not just Monday to Friday,” Sweeney said.

They launched the rtw with Mr Porter for two seasons to “test the waters,” Whiddett said, and the collection performed so well that it gave the duo the confidence to branch out. The rtw is also carried at Bergdorf Goodman in the U.S. and has grown to account for 50 percent of sales, up from 30 percent two seasons ago.

“We knew we had to have a full collection to open a store in New York,” Whiddett said. “And it’s where we’ve seen real growth,” Sweeney added. “We make 20 to 25 bespoke garments a week, and it’s a nice, healthy business, but it’s very specialized.”

And by starting out with the rtw, Thom Sweeney may eventually get a guy to take the plunge into bespoke once he’s ready to invest more in his wardrobe. While the rtw retails for under $2,000, a bespoke suit averages $4,000, while made-to-measure is around $2,800.

While the rtw may be growing more quickly, it’s the custom work that still defines them.

“When we started, our families told us we were mad, tailoring is dead,” Sweeney said. “But we’re both passionate about it. And there are not a lot of young companies doing what we do. We have our own identity, feel and look.”

Eventually, the duo hopes to add a store in Los Angeles and also move into Asia. But because they’re self-funded, their growth will be slow, at least for now.

“We’re taking things step by step,” Whiddett said. “And we’re fine with that.”

“Bespoke is a cash-rich business,” Sweeney added. “You get deposits upfront so you don’t need much capital. But now that we’re buying stock for the ready-to-wear, we need to manage our cash flow, so in the future, we may need partners.”

They said they couldn’t venture a guess on what sales the store will produce but are hoping it will be strong. “After three to six months, we’ll have an idea,” Sweeney said. And they’re not rattled by the rough retail climate and all the empty storefronts in New York, viewing instead as an “opportunity,” Sweeney said. “We think it’s a good time to open.”

The store had a soft opening earlier this week and has already found a following. In fact, one English gentleman, who Sweeney said was the brand’s first customer — they refer to him only as TS001 — made a point of being the first one to welcome the brand to New York with an order.

But they’re willing to work hard and do what it takes to ensure the store’s success.

Whiddett, who relocated to the U.S. with his wife and two young children, said the brand will “actively work to get people here,” and will also depend on word-of-mouth to draw customers. “It’s all about the experience they have,” he said. “You can’t just open the doors and expect it to take off.”