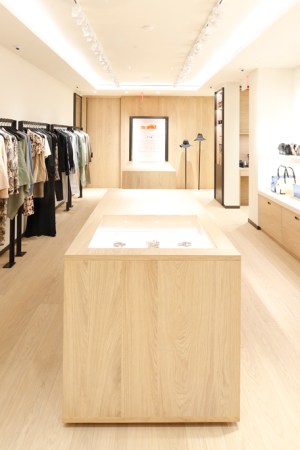 The designer’s all-are-welcome attitude is very much the bedrock of his signature label’s ideology. So it’s fitting that after a two-year search, Maier decided on an 1840s town house at 407 Bleecker Street on the tree-lined block of his choice for his second New York store. The fireplace, exposed brick walls and Borge Mogensen chairs near the store’s entrance furnishings add to the boutique’s warmth and inclusive feel. The boutique’s bird’s-eye view of the little park across the street appealed to the nature-loving designer, who grew up in a town at what he described as “the door to the Black Forest.”

“It’s a luxury to see a little greenery,” he said.

With locations in Palm Beach, East Hampton and Madison Avenue, the West Village shop marks the designer’s fourth store nationwide, with a fifth due to bow at Bal Harbour Shops in June. As has been the case with each of his stores, Maier strives to embrace the setting as it is, rather than how he might envision his brand to be. “It’s important to adapt to the neighborhood. Even with Bottega [Veneta], if we don’t like the facade of the building, then we decide, ‘Let’s not get this store.’ I think that is so wrong and it is such a disgrace to the taste of the town, if you renovate everything. I think, ‘If you want to come here, embrace what this is about,” Maier said.

While his Bottega Veneta collection leans on the ultraluxe, Maier said he approaches his signature label with a different mind-set. “It’s more about the casual side, the necessities that I would like the client to have for her time off or to wear at the end of the day, for weekends, to go away or to pick up the kids at school,” the designer said. “When you shop at the other side [Bottega], it’s all about the extraordinary and the exceptional. That goes along with the price point, too.”

Next year, fans of his brand will find a signature collection of sunglasses that is being developed in-house at his Kering-backed namesake label by the parent company’s new eyewear division manned by many former Safilo workers Maier has worked with for years. And he has his eye on opening a Los Angeles boutique, perhaps as early as 2016.

On another front, Maier is working on a book that will be published by Rizzoli this fall, showcasing various Bottega Veneta ad campaigns and the photographers who shot them over the years, including Nan Goldin, Philip-Lorca diCorcia, Lord Snowdon, Sam Taylor-Johnson, Stephen Shore, Annie Leibovitz and Nobuyoshi Araki. “It’s nice to see that now because when they ran, I never wanted to put ‘shot by’ because all these people have created a body of work that is so recognizable,” he said. “If you like photography, it’s obvious who shot the picture. And then I thought, the people who are curious, will look and dig to find out who shot it because we always have a little something online on our Web site about the photographer, the back story and their career.”

The book project dovetails into his philosophy. “I think it’s nice to see something through someone else’s eyes because maybe they see something completely different than I do. And that’s nice because in the end, it’s all about individualism — everybody makes it their own. The client makes it their own,” Maier said. “I always think you never want to know where the clothes [someone is wearing] come from. You never want to talk to somebody and remember their clothes. You talk to somebody and look at their face, you look at their eyes. The clothes are just there — you need to cover up because it’s raining today.”