The brand expects to add six stores by the end of next year.

The California activewear brand, which operates six stores in its home state, is planning to double its retail footprint by the end of next year. Vuori just opened a unit in Manhattan Beach, Calif., and will add another in the Malibu Country Mart in Malibu on Nov. 20. Beyond that, units are expected to be added on Abbot Kinney in Venice, Calif., in the first quarter of next year, followed by another in Studio City in the second quarter, as well as a unit in San Jose.

Soon after, the brand expects to jump beyond California and seek locations in other key cities. In the past, Kudla has identified such places as Scottsdale, Ariz.; Denver and Boulder, Colo.; Austin, Tex.; Seattle and Portland, Ore.; Chicago, and even New York as being on his wish list.

Founder Joe Kudla, who created Vuori in 2015 to fill a void he saw in the men’s activewear market for shorts that worked in the gym or out to lunch, said he remains “bullish on vertical retail.” Although the bulk of Vuori’s business continues to come from its direct-to-consumer efforts — which represent some 75 percent of the brand’s sales, believed to be in excess of $50 million — physical stores remain at “the heart of our vision. We want to inspire people to live healthy and happy lives. That’s a lofty goal, but there’s no better way to connect with people than in a physical world.” 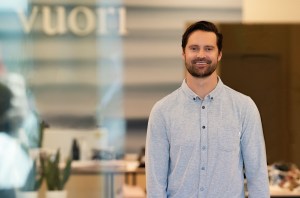 Kudla said he’s “very fortunate” that Vuori’s comfortable, yet sophisticated pieces performed well during the pandemic, even though its stores were closed. Now that they’ve reopened, he said, “They’re very profitable and they’re still comping positive even though they were closed for two-and-a-half months.”

Kudla attributes that in part to looking at four-wall profitability differently than most traditional retailers and carefully selecting locations where he knows his customers live, work or play. The stores have hosted yoga classes, boot camps, art shows and other activities that remain the core of the brand and have managed to build a community of like-minded customers.

When physical gatherings were impossible, Kudla said Vuori quickly launched an online Active Club to replace those in-store events. So far those classes have amassed more than one million views, he said, and they will continue even after things return to a post-pandemic normal.

Catherine Pike, who joined Vuori as senior director of retail in January after more than a decade at Lululemon and other fitness brands, said: “None of us knew what to expect when shoppers returned to stores, but we found that people were craving connections and our customers were happy to be back. So even in this incredibly difficult time, home is the store and they want to be part of it.”

During the height of the pandemic in the spring, Pike spearheaded a program to train the staff in the stores to become “omni associates” who can work not only on the sales floors but also online. “The pandemic pushed us to that, but it’s been a huge win,” she said.

Kudla added: “One of our goals as a business is to enhance the customer experience. When we had to shut our stores, we redeployed our 50 retail employees and our customers are happy with the service.”

What they’re also happy with is Vuori’s take on lifestyle apparel, particularly performance and performance loungewear, Kudla said. In addition, outdoor apparel and outerwear, particularly an eco-friendly coat made from recycled materials, along with a travel/commute collection, has been popular. “Travel has been put on hold, but we’re seeing the category resonate with customers for its versatility,” he said, adding that the collection takes the lessons learned from activewear and applied them to sportswear.

Women’s wear, which the company expanded into last year, has been growing significantly and now accounts for 40 percent of total sales and 50 percent of online sales. “We expect in the next two years, it’ll be 50-50 overall,” he said.

Vuori, which counts former Neiman Marcus chief Jim Gold as an investor, received $45 million from Norwest Venture Partners last summer. Gold has predicted that it can become a $1 billion brand. Kudla, a California native, athlete and one-time model, founded Vuori after taking up yoga to help alleviate years of chronic back pain that he’d playing football and lacrosse.

In addition to its own stores and e-commerce site, Vuori has a strong wholesale business with more than 500 specialty accounts in the U.S., Canada and Japan, including Equinox, Nordstrom, and REI as well as outdoor specialty stores and fitness clubs.