By Obi Anyanwu
with contributions from Booth Moore
on January 22, 2020

Los Angeles e-sports organization and lifestyle brand 100 Thieves is hoping to have fans lining up, Supreme-style, on the sidewalk outside its new 15,000 square-foot training facility, content production studio and retail store in Culver City, where it will drop six capsule apparel collections and one collab in 2020.

The new Cash App Compound (it’s named after and sponsored by Jack Dorsey’s mobile payment service) opened Wednesday with a ribbon cutting and media tour attended by Twitter founder Dorsey, entertainment mogul Scooter Braun and others, in the entertainment-tech nexus of Culver City, near the Nike and Beats Electronics L.A. headquarters.

“This is the big day for 100 Thieves, and for anyone in the gaming industry and fashion,” said chief operating officer and president John Robinson, speaking to the media and to employees, many of them clad in the brand’s hoodies and jerseys.

“I wanted to see it for myself, this is awesome for Cash App and for e-sports,” added Dorsey, touring the new home for the organization founded in 2017 by Matthew “Nadeshot” Haag after he retired from competitive gaming, and turned away from a successful career that included a 2014 X Games gold medal and Esports Athlete of the Year award, both on display in his office, which doubles as a studio so he can live-stream at a moment’s notice.

Haag took to content creation on YouTube and Twitch, entertaining his fan base, and founded 100 Thieves with an investment from Dan Gilbert and one year later a series A funding round led by rapper Drake and SB Projects founder Braun. In 2019, the brand closed its series B funding round, securing $35 million from Gilbert, Braun and Aglaé Ventures (the tech investment firm of Groupe Arnault, controlling shareholder of Louis Vuitton Moët Hennessy), increasing its funding to $60 million and its valuation to $125 million.

The opening of the facility marks the next phase of growth. “The whole idea of creating the compound was to bring everything under one roof,” said Robinson.

As soon as you walk in from Jefferson Boulevard, there’s a retail space, and execs hope that getting a glimpse into the rest of the open-floor plan (you can see trophy cases, a brag wall with photos of the teams winning, the original Nike 100 Thieves shoe collaboration, and fridges full of Red Bull, natch) will be an added bonus for fans. “We knew we wanted something that was public-facing, so that when we did retail everyone could pick up the latest stuff. We need to be a little conscious, because we have players practicing all the time and streamers. Fans will have time to stay in the retail space to see what’s going on. We’re going to create new unique spaces,” said Robinson. 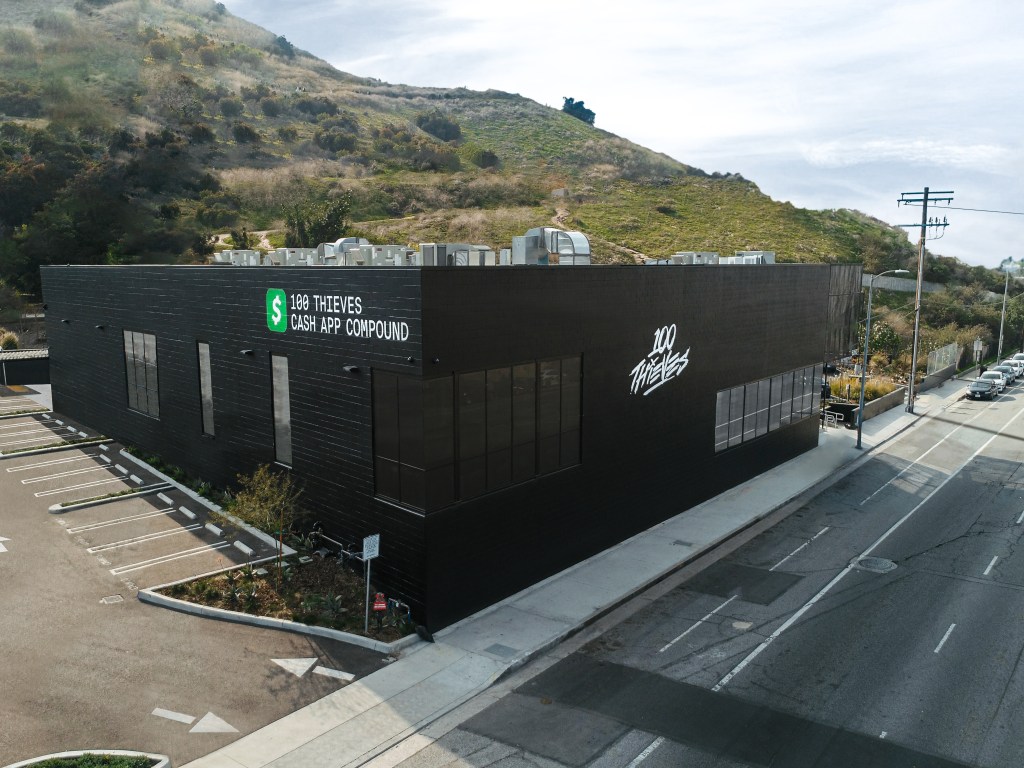 The brand’s first full apparel collection will be launching in late February.

“We really captured esports fans’ attention with our baseball jerseys in 2018 and soccer-inspired kits in 2019 and our fans are pushing us to make something innovative,” said Robinson.

100 Thieves also recently launched its 2020 jersey program, which coincided with the League of Legends season kickoff. “We wanted to do something that’s really clean,” said 100 Thieves vice president of brand and apparel Doug Barber, who joined from Reigning Champ. The drop marked the fifth jersey offering from the brand, and the 11th apparel release. The baseball-inspired jerseys in 2018 and the spring collection in 2019 both sold out 15 minutes after launch.

“It’s different from what everyone else is doing, and the first time we stripped the color out of the sponsor’s logo. It’s product that’s so well made and visually appealing that it’s not just going to be a jersey, but a lifestyle piece,” said Barber, adding that he will be pushing the brand aesthetic with more graphics and color in future drops. “There will be a fashion element but rooted in sport,” he said, pointing to stylized look-book photos on his wall, including one featuring a team player who looked like “he could be walking around in Shoreditch.”

Barber said he joined 100 Thieves after seeing the passion Haag and Robinson had about the brand. “It’s such a large platform that we together thought we could create something special and something different than what’s currently in gaming.”

Robinson has more of a sports background, albeit in gaming. He worked at Electronic Arts, the California-based video game company behind The Sims, Need for Speed, Apex Legends and very lucrative EA Sports franchises Madden, FIFA and NBA Live among others. He also started an indie game studio prior to joining 100 Thieves.

“I’ve always been a big sports fan,” he said. “When my passions came together that’s what really drew me to esports. We bring a really differentiated approach to esports. Matt [Haag] is the creative driver behind this and is why it’s captured so many fans’ attentions so quickly.”

Despite the increased attention on the studio and retail store, Robinson said 100 Thieves apparel is not the main driver of the business. “The last thing that we want to do is become any other sports team that makes a ton of merchandise,” he said. It’s not even half of the business, the main focus is to create a “better experience for our fans” and produce “innovative product.”

Winning and losing tournaments doesn’t impact the business much, either, but Robinson said, “the reality is our fans want to win and we want to win. Winning and losing is still a huge priority for us. We made a promise to our fans and if that’s the case, we need to deliver championships.”

According to Robinson, 100 Thieves’ qualifies for League of Legends tournaments, the Fortnite team is ranked in the top three globally and the Counter-Strike team is ranked in the top 10. The team took home the Team of the Year Award at the 2019 Tempest Awards that recognizes companies and executives in the esports industry, and Haag and 100 Thieves member Logan Dodson was awarded Personality of the Year and Videographer of the Year, respectively, at the 2019 Awards in Arlington, Tex., on Nov. 16.