Alife is hitting the reset button in its 20th year in business.

Since Rob Cristofaro founded the brand in 1999, Alife has been a popular name among New York City’s skaters, ball players and the streetwear community. The brand was one of the first in that market to introduce collaborations and a footwear collection and now, Alife is ringing in 20 years with renewed energy.

“We haven’t ever done an anniversary or really put much energy behind any of the anniversaries that we’ve had,” said Cristofaro. “What you’ll start seeing from the 20th anniversary onward is the culmination of consistent releases, launches, projects and executions.”

The New York City-based brand last year launched collaboration footwear with Crocs and this year released a capsule collection with the Brooklyn Museum and artist Faith Ringgold. The company is relaunching footwear in October, and also this fall will offer a new collaboration with Lee Jeans, extend its partnership with Adidas, and work with the Bronx Museum of the Arts for its upcoming exhibition on photographer Henry Chalfant titled “Henry Chalfant: Art vs. Transit, 1977-1987.”

“People know Alife for footwear, it was one of the first things that we got into,” said Alife general manager Treis Hill. The brand’s original partner had a background in shoes and that history soon led to collaborations with Adidas, Reebok and Saucony.

Today, the brand is still dropping sneakers in limited quantities globally and partnering with select retailers, including Selfridges, where it will host a pop-up shop in late September, as well as RSVP Gallery, Slam Jam, Wellgosh in Leicester, England, Smets in Belgium, and Nous and Starcow in Paris.

Adidas was the brand’s first collaborator in 2003, when it released the Metro Attitude and Grand Slam sneakers. Alife and Adidas subsequently released two versions of the Nizza Hi sneaker this year and will continue their partnership into spring 2020 with black and yellow silhouettes.

The brand is also partnering with Lee Jeans to highlight the denim label’s history with New York’s b-boy, or breakdancing, culture. The two collaborated on pastel jeans and matching denim jackets, and Lee will produce more co-branded jeans for Alife along with heavy fleece hoodies and sweatpants.

“Lee had relevance to me growing up in New York,” said Cristofaro. “A lot of the brands that we approach are because of either the nostalgia or their connection to New York [that makes them] relevant to us.”

Finally, Alife was approached by the Bronx Museum of the Arts to produce merchandise for its gift shop to be sold during the Henry Chalfant exhibit which opens this fall. Chalfant is best known for his documentation of graffiti in the Bronx in the late Seventies and Eighties. Cristofaro, who was a graffiti artist in the Bronx in his youth, describes Chalfant’s book, ‘Subway Art,’ as “the bible of graffiti.” Cristofaro said, “We were asked to be involved on the product aspect, so we’re going to create a small gift shop within the museum.

“The way Supreme is skate-oriented, part of the DNA of Alife is graffiti and I grew up doing that,” he added. “I started doing it probably when I was 15. I stopped when I started Alife. I look back at old pictures of Alife and it’s Kaws, Futura, all these guys that were part of our world, and it all meshes together with Alife’s DNA.”

Alife has also worked with music artists such as Drake, Nas, and John Mayer for its Alife Sessions concerts and events. The brand has held numerous intimate shows at its retail store on Rivington Street on the Lower East Side of Manhattan. 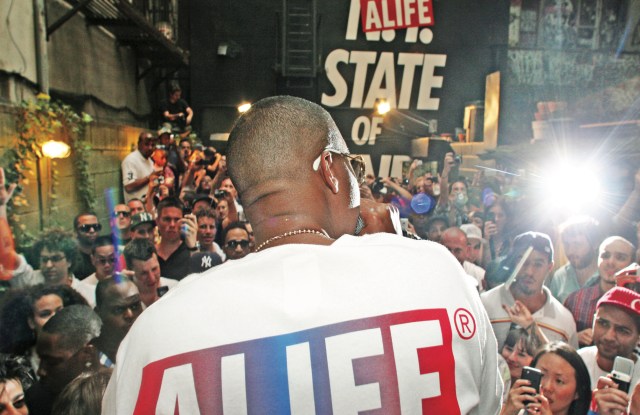 Although the brand is on stable footing now, it has survived a number of setbacks over the past two decades. A former manufacturing partner went bankrupt, meaning Alife wasn’t able to take advantage of launches or events for a few years and instead spent its time raising capital to get back on its feet.

But the last two years “have been great,” HIll said, with the brand’s wholesale and general retail operation currently posting sales that are up 18 percent from last year.

It now houses its inventory in a warehouse in Leicester, allowing for faster deliveries and lower Customs fees and duties, and is exploring relaunching in Japan. New product is on the way featuring photography and artwork from Sam Shaw and Robert Dyer, and fun collectibles such as tokens made with jewelry designer Mr. Flawless and a mini urinal by Parisian porcelain company Non Sans Raison. They are also collaborating again with Norman Rockwell on “The Problem We All Live With,” the artist’s painting inspired by Ruby Bridges, the first African-American child to attend an all-white public school. Alife previously worked with the deceased artist through a license.

“Twenty years — it is an accomplishment to be around and still relevant for this amount of time, but it has been an internal reset for us,” said Cristofaro. “The 25th anniversary is going to be a real celebration.”