Yet another brand benefits from Kanye West’s stamp of approval. 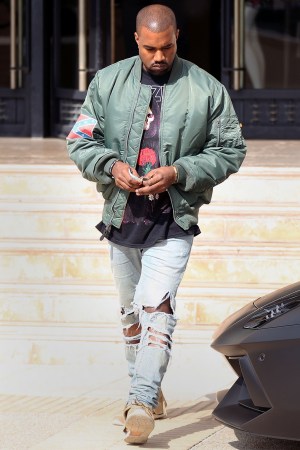 While many retailers and brands bemoan the warmer-than-usual temperatures, outerwear company Alpha Industries is humming a different tune.

Alpha Industries chief executive officer, Mike Cirker, whose grandfather Samuel Gelber founded the business as a military outfitter in 1959, said the boost in business reminds him “of the Eighties when our government contracts were through the roof, and business from the Cold War was booming.”

Alpha Industries’ lift in business — Cirker said revenue grew 30 percent this year — can be attributed to the MA-1 flight jacket. Over the past couple of years, the medium-weight bomber has resurged in relevance with luxury brands presenting their own interpretations and other fashion brands collaborating with Alpha Industries.

According to Cirker, every 10 to 12 years the silhouette peaks at retail, but he said the jacket’s current popularity is unprecedented, thanks perhaps to Kanye West who may have helped push the needle. “Kanye West’s team called us up two or three years ago before his Yeezus tour and said he wanted tour jackets for everyone,” said Circker, who added that Alpha Industries has also produced tour jackets for artists including Gloria Estefan and Madonna. “This was a year ahead of when the trend hit the runways so he was very forward-thinking. He brought 100 jackets or so from us and applied his own logo and patches.”

In addition to outfitting his tour crew, West sold the jacket as official tour merchandise, and in December, rapper Travis Scott released a limited-edition run of customized Alpha Industries MA-1 tour jackets embroidered with rodeo and cactus insignia for $300. The original jacket retails for $135.

The MA-1 flight jacket design isn’t proprietary — other brands including HQ Issue, Cockpit, Mil-Tec and Rothco produce and sell the style — but Alpha Industries, which still maintains some military contracts, has marketed its brand to target a broader scope of customers that go beyond the hunting, fishing and gun-collecting demographic. The brand is also beginning to cater to women and in 2014 it launched a women’s MA-1 jacket.

Before it made its way to civilians, the bomber was first developed for pilots in the U.S. military in the late Forties. Alpha Industries started producing the jacket in 1963 and entered the commercial market in 1970. Although Cirker said the MA-1 style has always been a bestseller for the Chantilly, Va.-based company — the business was originally started in Knoxville, Tenn. — this season the bomber has solidified its top spot by selling double the number of units of other Alpha Industries’ styles.

Cirker joined the family-owned business in 2007, working at the company’s London subsidiary before replacing his father Alan Cirker as ceo in 2011. Cirker’s arrival along with the MA-1’s high sell-through has shifted priorities for the company.

“I saw the opportunity to turn this into a fashion company,” said Cirker, who noted that his father was primarily focused on pushing fashion pieces at Alpha Industries’ international subsidiaries and promoting traditional styles in the States with a distribution network mostly confined to Army surplus stores. “The trendsetting boutiques like Opening Ceremony and Ubiq in Philadelphia want fashion from us.”

This shift has also opened the door to collaborating with more brands including Stussy, Ben Sherman, Burton, Undefeated, Palladium Boots and Ace Hotel.

“It was a little bit of a learning curve,” said Cirker when asked about the early days of working with other brands. “When you pick up the phone and it’s Burton’s creative director on the line, it kind of blows your hair back. We had to truly understand how does Alpha work with cobranded product and what is our criteria for bringing on the right partner.”

Cirker, who said there are no plans to sell the business, expects to ride out the MA-1 trend for the next year or two, but he’s hoping to maintain interest in the style with a custom patch program, which is set to launch this year. Artists will design limited-edition Velcro patches that will be released each month, which customers can purchase and attach to their jackets.

He’s also tapping into what’s selling at Alpha Industries’ licensed distributors in Japan, Europe and South Africa to inform design decisions in the U.S. and get ready for the brand’s next retail hit.

“We are seeing the N-2B short-waist parka starting to trend up in Japan. So we will start showing that to buyers as something that will trend next year,” said Cirker, who believes the B-15 flight jacket is another possible successor to the MA-1.

Even as Alpha Industries pushes into the contemporary market, Cirker is steadfast about the brand remaining true to its military roots.

“My goal here is to have a 360 military brand,” said Cirker. “I am one of last surviving brands that sold to the military in the Fifties and Sixties and it’s important for us to keep that same heritage.”