Alpha Industries on 60th Anniversary Collabs and Beyond

The military heritage brand is launching collabs with J. Crew, Atelier & Repairs and 3sixteen and will launch new categories in the U.S.

When Mike Cirker assumed the role of chief executive officer of Alpha Industries in 2011, he set out to position the military company as more of a fashion brand.

So to celebrate its 60th anniversary, the brand that has become popular with the likes of Kanye West and Travis Scott is launching three special collaborations this month with J. Crew, Atelier & Repairs and 3sixteen to mark the milestone.

“Collaborations have become an important piece to our business,” Cirker said. “Collabs are a very important part of our branding, because Alpha is the authentic military heritage brand. I don’t think most brands can make that claim as confidently as we can.”

The projects are a combination of each brand’s expertise. Atelier & Repairs sourced and upcycled vintage Alpha Industries jackets; 3sixteen reinterpreted its outerwear with a special dye process that leaves no two jackets alike, and J. Crew, with Steven Alan, redid its barn jacket in Alpha fabrics and colors.

The 3sixteen project is a follow-up to a collaboration from 2018 and launches today on the brands’ respective web sites and at select stores. The capsule includes a M-59 Fishtail Parka, chinos and a heavyweight T-shirt ranging in price from $65 to $550.

“[3sixteen] sends their jackets to these wash houses in Pennsylvania, and they use a natural iron dye, but it takes a hand-done process and no two are alike,” Cirker said. “This project reminded me of serving the military and that there are always imperfections.” (Alpha still produces for U.S. military allies, but had to forfeit its U.S. military contracts in the Nineties when it moved its production overseas.) 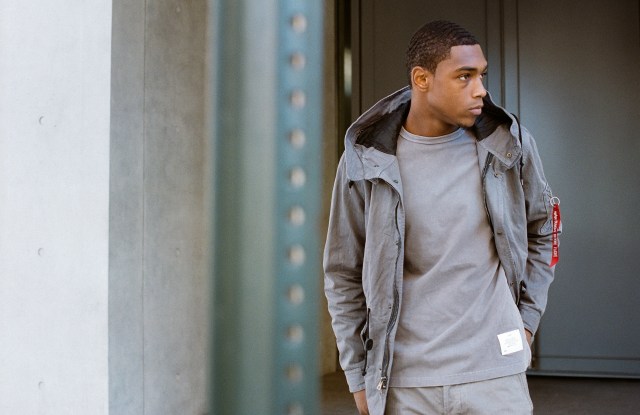 Cirker believes there are “thousands or hundreds of thousands” of Alpha Industries jackets in circulation today on eBay or at vintage and surplus stores, which made the Atelier & Repairs collaboration especially interesting. “We’ve been making the same jacket for decades. If upcycling continues, then Alpha has such an opportunity to take our old vintage products and old fabric and create an upcycled program of our own product. I’m hopeful [the collaboration with Atelier & Repairs] is not a one-off.”

The three collaborations kick off the brand’s domestic celebration. Alpha celebrated the milestone in Seoul and in Germany earlier this year with a music festival where local hip-hop acts performed. The U.S. celebration will take place at ComplexCon in Long Beach, Calif., in November, where the brand will retell its story and brand heritage (including the significance of its “Remove Before Flight” ribbon that nods to the red tags that hang on fighter jets as precaution before each flight) and lengthy collaboration history that includes Comme des Garçons, Budweiser and even Madonna.

Alpha will also unveil a limited-edition watch with Timex that will kick off a partnership between the two heritage brands. “There’s so much imagery of soldiers in a Timex and Alpha jacket,” Cirker said. “[Timex] opened up their archives to us and showed us the watches that were being issued to the active duty Marines and soldiers in the year of our founding. We took that design and tweaked it a little bit.”

Though collaborations are a major focus for Alpha, the brand will also be launching new categories in the U.S. in fall 2020, including apparel and accessories such as hats, belts, bags and sunglasses inspired by military design. In 2016, Cirker said he started to see a decline in the bomber jacket trend. “I guess my crystal ball was working pretty well. It’s done now.”

The other categories have already launched in Europe, where the brand is seeing “tremendous growth,” and Japan, where the brand “is a little down right now.” The women’s business has been “tricky” for Alpha, but Cirker believes that the core business in the long term will be its classic products despite the success recently of more trend-driven products.