Brianna Lance has teamed up with Freddie Cowan, lead guitarist and vocalist of The Vaccines, and English tailor David Chambers to create a line of men’s wear basics. 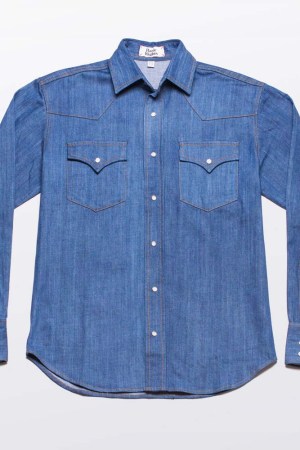 Brianna Lance has left her design post at Reformation, a women’s line known for its feminine pieces made from vintage and sustainable fabrics, and is moving into the men’s category.

“I had been doing women’s wear for a long time,” Lance said. “The idea of building something new was exciting.”

Lance has partnered with Freddie Cowan, lead guitarist and vocalist for The Vaccines, and English men’s wear tailor David Chambers to create Basic Rights, a line of men’s wear basics with a vintage tilt. Lance told WWD the collection was inspired by stylish men of the past including James Dean, Muhammad Ali and Steve McQueen.

The offering is comprised of wardrobe staples including a denim jacket, trousers, jeans, a basic T-shirt, a button-up shirt, sweatpants, sweatshirts and a Western shirt. Lance has left no detail unturned. She’s removed the classic triangle from the sweatshirt collar and designed the jeans without a tab so there’s no indication of the brand. She even considered men’s chest hair when constructing the T-shirt.

“We heard from men that they usually sweat through the T-shirt and you can see their chest hair, so we wanted to fix that with our T-shirt,” Lance said.

The collection, which is made in Thailand from Japanese fabrics, retails from $45 for a T-shirt to $200 for a denim jacket. Similar to Reformation, Lance is forgoing the wholesale model.

“I think wholesale is an old-fashioned route and it seems to be dictated by buyers instead of customers and what we want to buy,” Lance said.

The line, which will debut during New York Fashion Week: Men’s on Monday at Electric Lady Studios, will be sold on its e-commerce site, which Lance wanted to make as streamlined as possible to target male shoppers. She’s stripped the site of extraneous information, opted for real men to wear the clothes instead of models, and will include a blog that details the provenance of each piece.

Lance, who was wearing a shirt from the collection, sees women wearing it, too.

“For me, it shares a similar aesthetic with Reformation,” Lance said. “This is the way the cutest guys I know dress.”