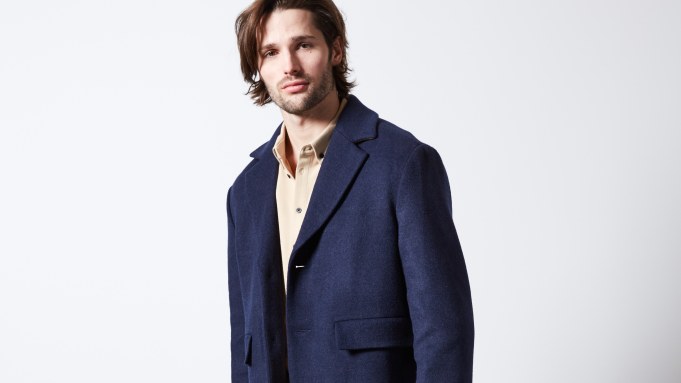 G-III Apparel Group is going all in when it comes to the relaunch of DKNY men’s.

The $2.4 billion New York-based conglomerate purchased Donna Karan International, parent of the DKNY label, from LVMH Moët Hennessy Louis Vuitton for $650 million at the end of 2016.

The women’s DKNY collection was the first to debut under the new ownership arrangement, transitioning out of its more-widespread department store distribution to become exclusive with Macy’s for spring. The men’s wear will be sold at Macy’s along with Hudson’s Bay in Canada, Liverpool in Mexico and on the company’s web site.

The men’s collection has been absent from the market since fall 2015. For three seasons, DKNY was designed by Dao-Yi Chow and Maxwell Osborne of Public School, but the designers focused on women’s apparel only. That arrangement ended after the G-III sale was finalized.

In May, G-III signed a multiyear licensing deal with PVH Corp. under which PVH will design and distribute DKNY men’s sportswear, dress shirts, neckwear and jeans in the U.S. and Canada. The company also produces belts and small leather goods.

The first collection will be for summer and will hit stores in the first week in April; the big push will be for fall, which will start flowing into stores around June.

“This comprehensive collection pays homage to DKNY’s lifestyle heritage: effortless and wearable pieces that elevate the style of the individual wearing them,” said Morris Goldfarb, chairman, chief executive officer and president of G-III. “The collaborative reimagining of DKNY men’s wear speaks to our confidence and dedication to its future growth in the hands of PVH.”

The PVH part of the line is being designed by a team that includes Alex Cannon, who has been with the corporation since 2009 and also had his own collection for six years, according to his LinkedIn page.

In addition to sportswear, the fall DKNY collection offers a wide range of categories — everything from outerwear and polo shirts to jeans and footwear. The outerwear and shoes are being produced in-house by G-III but Peerless Clothing clothing holds the license for  tailored clothing,

Even though there are a lot of partners, the line hangs well together as a collection. Its aesthetic continues to be modern, city-inspired pieces that, while not technical enough for the gym, still speak to the casual ath-leisure trend. Dressy joggers, updated pique polos, sweatshirts, intarsia sweaters, hoodies, short wool topcoats and reflective puffer jackets are among the key pieces. The palette is rooted in basic solid colors such as black and navy but with pops of color including orange.

And there are lots of DKNY logos. From subtle references on zipper pulls on polos to large embroidered letters on hoodies, the brand’s name is hard to miss in the collection.

DKI was established in 1984, and DKNY was launched in 1989. At the time of the sale to G-III, the DKNY brand generated more than $300 million in volume.